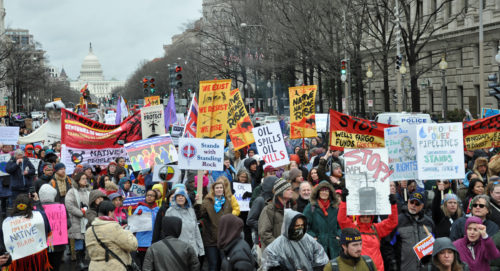 [Episcopal News Service – Washington, D.C.] Episcopalians and other people of faith who marched through a cold rain here March 10 in the Native Nations Rise demonstration and rally did so as part of a traditional pattern of prayer, then action. 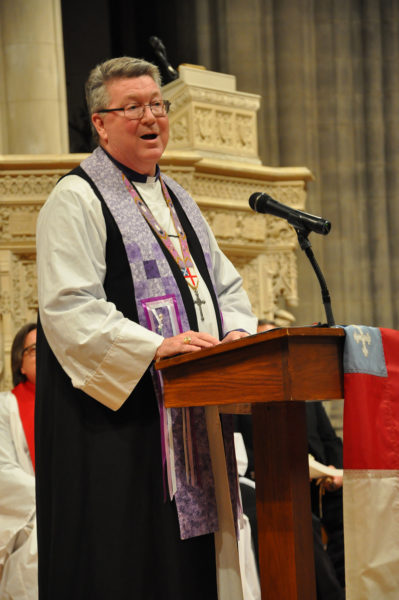 North Dakota Bishop Michael Smith opened a nearly two-hour prayer service March 9 at Washington National Cathedral on the eve of the march outlining the pattern. “For people of faith, working for justice includes both prayer and action. We pray and then we act, and then we pray again and we act, and we pray again and we act until the Creator God, who has made all that is, brings about that for which we work,” said Smith, an enrolled member of the Potawatomi Nation of Oklahoma. “Tonight we pray; tomorrow we act.”

The next day, the Rev. Phyllis Manoogian, a deacon and Diocese of California missioner to Guatemala, wore a bright orange poncho to shield from the icy rain that fell as the march stepped off from in front of the U.S. Army Corps of Engineers’ headquarters. She traveled to Washington, D.C., from the rural village near Antigua where she teaches indigenous women and their children, she said, because standing with the Standing Rock Sioux Nation epitomizes the call of the Jesus Movement.

“I think the Episcopal Church has been on the tail end of many social issues, and I think it’s important that we step up and be leaders, not followers,” she said as the protesters rounded the corner near the Federal Bureau of Investigation headquarters and moved down the block to pause outside of the new Trump International Hotel. “It’s part of the Christian ethos to care for others and to be good stewards of the Earth, and to love our neighbor.”

The march and rally drew hundreds of people from Arizona, New Mexico, Illinois and New York, as well as the Dakotas. As native protesters and their allies marched through downtown Washington, D.C., Energy Transfer Partners was at work back in North Dakota. Bolstered by a favorable court ruling on March 7, the company is planning to start pumping oil next week through the last section of the 1,172-mile, 30-inch diameter pipeline. It recently punched that section under the Lake Oahe section of the Missouri River a half-mile off the Standing Rock Reservation.

A large Episcopal contingent joined the march in D.C. Lay people, priests and seminarians from nearby Virginia Theological Seminary carried signs and joined in call-and-response shouts proclaiming that they stand with Standing Rock and that children cannot drink oil. 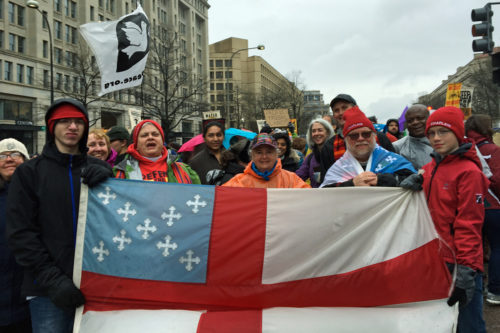 The 2-mile route ended in Lafayette Square across Pennsylvania Avenue from the White House. Opponents stood in the street under the watchful but non-interfering eyes of the police. At least two black-clothed people watched the crowd from the White House roof.

As speakers voiced opposition to the pipeline at the rally, the Rev. Cornelia Eaton, a Navajoland priest who is in her second year at VTS, said that the Baptismal Covenant makes protecting water an essential job for Episcopalians.

“[The Baptismal Covenant] speaks to the spirit of who we are and how God has called us into living in this place of brokenness and challenges,” she said.

Episcopalians and indigenous people need to continue building relationships so that they begin to learn about each other and move into what her culture calls the “harmony way, the blessing way” of living with each other and the world, she said. “I believe that’s what God calls us to be and to become. That’s God’s desire for God’s people.”

The pipeline is poised to carry up to 470,000 barrels of oil a day from the Bakken oil field in northwestern North Dakota – through South Dakota and Iowa – to Illinois, for shipping to refineries. Sioux tribal leaders repeatedly expressed concerns over the potential for an oil spill that would damage the reservation’s water supply and the threat the pipeline posed to sacred sites and treaty rights. Texas-based developer Energy Transfer Partners says it will be safer and better than transporting oil by truck or railcar.

On Feb. 8, the U.S. Army Corps of Engineers, which manages parts of the Missouri River and the surrounding land, gave Energy Transfer Partners permission to drill the pipeline’s final stretch. Permission came at the prompting of President Donald Trump who, in one of his first presidential actions, told the Corps to move the pipeline forward.

Judge James Boasberg of the U.S. District Court for the District of Columbia on March 7 rejected a tribal request to stop construction temporarily of the last section of the pipeline on religious grounds. Now, the Standing Rock and Cheyenne River Sioux tribes must wait for Boasberg to rule on the substance of their lawsuit, a ruling that may not come until April.

The Standing Rock Sioux Nation, the Indigenous Environmental Network and the Native Organizers Alliance organized the Native Nations Rise march and the activities that preceded it. Those activities included a March 9-10 encampment of teepees in the shadow of the Washington Monument with speakers and cultural workshops, and the ecumenical and interfaith “Standing as Stone: Indigenous Nations and Allies Gather at the Washington National Cathedral” service the evening of March 9. Solidarity events happened around the country. 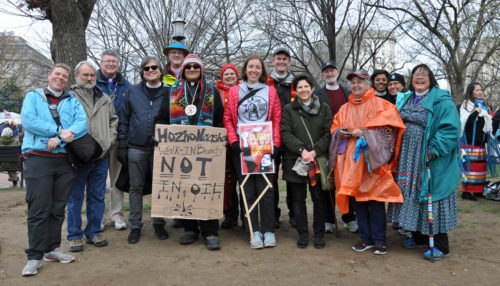 Some of the many Episcopalians who attended the March 10 Native Nations Rise demonstration and rally pose in Lafayette Square across from the White House. Photo: Mary Frances Schjonberg/Episcopal News Service

The Episcopal Church has advocated with the Sioux Nation against the Dakota Access Pipeline’s route since summer 2016. Local Episcopalians have also provided a ministry of presence in and around Cannon Ball, North Dakota, the focal point for groups of “water protectors,” or pipeline opponents, that gathered near the Lake Oahe crossing. Those gatherings drew together members of close to 300 tribes in an unprecedented show of unity that resurrected the indigenous rights movement in the United States.

Organizers had three goals for this week’s events. The first was that Trump meet with tribal leaders to hear why the U.S. government must respect tribal rights. The second was to make the point that tribes must give their consent to such infrastructure developments as the Dakota Access Pipeline. Consultation with developers and government officials is not enough, they said. The third goal was to have a strong turnout of tribes and their allies in a show of support for tribal sovereignty aimed at protecting their homelands and the environment for future generations. 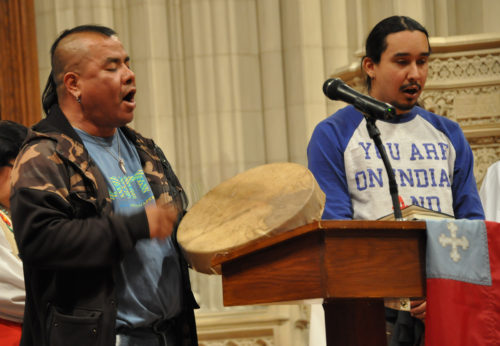 Two men in a group of drummers and singers from the Standing Rock Sioux Nation participate in the “Standing as Stone: Indigenous Nations and Allies Gather at the Washington National Cathedral” service. Photo: Mary Frances Schjonberg/Episcopal News Service

The night before the march, indigenous drumming and song filled Washington National Cathedral, and the smell of sweetgrass smudging hung in the air throughout the prayer service.

The service symbolized Christian churches’ efforts to reconcile with native people, said the Rev. Brandon Mauai, a deacon in the Diocese of North Dakota and former member of the Episcopal Church Executive Council.

“Every denomination has shown some support in trying to reconcile with the people,” he said, adding that activism surrounding the pipeline has spurred those efforts.

Balancing Sioux spiritual traditions with those of the church are always hard, Mauai acknowledged.

He said he has been on both sides, witnessing the trauma inflicted on indigenous people in the name of spreading Christianity and then serving on church governing bodies trying to decide best how to reconcile with those harmed by that legacy.

Worshippers experienced the embodiment of part of the Episcopal Church’s long association with the Sioux nations in the person of Faith Spotted Eagle, a relative of Vine Deloria Sr., a Standing Rock Sioux and the first tribal member ordained an Episcopal priest, and his son, Vine Jr., a noted theologian and author of “Custer Died for Your Sins: An Indian Manifesto.” Until the day of the service Spotted Eagle had only heard of but never seen the statue of the elder Deloria, who is one of very few Americans included in the reredos of the cathedral’s high altar. 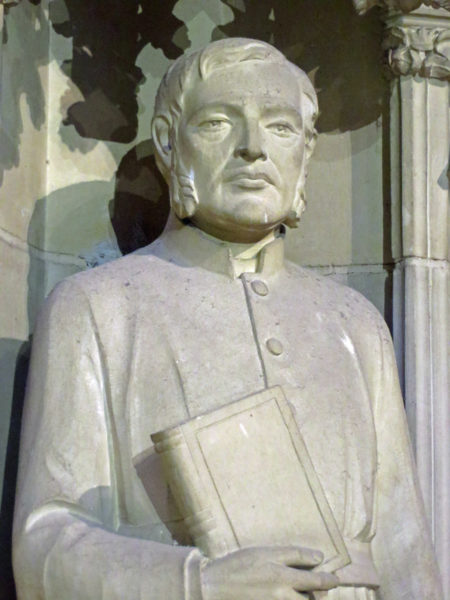 “Our ancestors have done some work together,” said Spotted Eagle, to bring together native people and their allies. “I’m sure that the ancestors are going to be celebrating” as they see people marching together through the streets of the capital.

The entire service is viewable below. The liturgy begins at the 1-hour, 40-minute, 21-second mark.