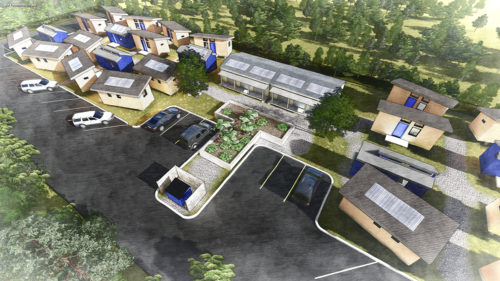 [Episcopal News Service] A coalition of Episcopalians, architecture students and social service providers in Bozeman, Montana, are in the middle of an innovative project that aims to address homelessness in the city – 155 square feet at a time.

The concept is a village of tiny houses for the chronically homeless centered around a community resource center, where residents could receive counseling, medical assistance and employment help until they are able to move into permanent homes. Organizers still are looking for an appropriate site, but most of the other pieces of the project are falling into place as other groups and individuals in the community rally behind the idea.

“Suddenly, this coalition has risen up that is excited about what we wanted to do,” said the Rev. Connie Pearson-Campbell, a deacon at St. James Episcopal Church in Bozeman who is one of the driving forces behind the planned Housing First Village.

Sara Savage, housing director at Human Resource Development Council, or HRDC, called Pearson-Campbell a “PR hurricane” in drumming up support for the project. HRDC, a nonprofit community action agency, brings to the table years of experience proving shelter and services to the local homeless population.

Montana State University is the third key player in the coalition. The School of Architecture created a course last fall in which students designed the tiny houses, and subsequent courses this year will help move the project through the regulatory and construction phases.

“We realize it’s probably a couple of years, or at least a year, before we’d be able to move the first units onto a site,” architecture professor Ralph Johnson said. “These things don’t happen overnight. But we’re moving faster than most of the communities” that have attempted similar projects.

Tiny houses are a big trend in the home-building world and in popular culture. Multiple reality TV shows have popped up to feature these small living spaces, even prompting some in the tiny house industry to debate whether such shows are good or bad for the “movement.”

In that context, tiny houses are seen as a hip way to downsize your living space, but some communities, such as St. George, Utah, and Seattle , have shown that tiny houses can be tools for outreach to homeless or low-income populations.

What makes Pearson-Campbell and St. James Episcopal Church unique is they represent one leg of a three-legged stool supporting a mission that came together almost by accident.

About 150 people are estimated to be homeless on any given night in Bozeman, and 30 percent are considered chronically homeless, a condition often tied to mental illness, substance abuse or other personal challenges, Savage said. Survival on the streets can be precarious, especially in Montana’s harsh winter months, and six homeless people were reported to have died in 2016 in Bozeman.

The HRDC had been housing about 10 people at a time at a transitional living space called Amos House, but it was forced to close last July after losing a federal grant. St. James stepped up and offered an unused home on church property, called Canterbury House, allowing HRDC to convert it to housing for up to four homeless women.

“I have to say, having one of our local faith-based partners look within their own resources … was so powerful and really made a direct impact on homeless women within a month,” Savage said.

Separately, Pearson-Campbell said, she heard last summer from a friend about a tiny houses project in Detroit, and it got her thinking about trying something similar to address Bozeman’s homelessness problem.

“I took one look at that and thought, oh my gosh, I think we can do this in Bozeman,” she said.

She brought the idea up in a meeting with the city planning director in August. On her way out, she just happened to pass Johnson, the Montana State professor, who was on his way in to talk to the planning director on an unrelated matter. After introductions, a tiny house partnership quickly was formed.

Johnson took the idea back to the university and, with two other professors, created the course that fall in which 12 students took on the task of designing the tiny houses.

“I knew that within the School of Architecture there’s a strong moral ethic among students,” he said. “And so based upon Connie’s personality and her aspirations, I offered a class in small shelters for the city of Bozeman.”

The result was two models, each just 155 square feet or a bit larger. One was designed to be accessible to people with disabilities. Each model featured a single bed, storage area, a shower and toilet, a compact refrigerator, a microwave, a sink and space for a chair. 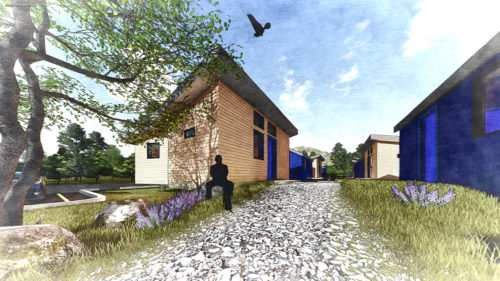 Residents could receive counseling, medical assistance and employment help until they are able to move into permanent homes. Photo: Montana State University School of Architecture

The students then created full-scale mockups from cardboard and tested them, including by inviting members of the homeless community inside. The semester concluded with an open house in December. More than 100 people came to see the models and learn about the project, Johnson said.

Six students will build the first of the tiny houses in a new course this semester that also will address some of the regulatory hurdles. Bozeman’s building code, like building codes in many cities across the country, includes restrictions on lot usage, dwelling size and home layout that don’t easily accommodate tiny houses, Johnson said. His students will research options that can be presented to city officials.

And then there is the challenge of finding an appropriate site for what eventually could be dozens of tiny houses and the community resource center. Savage doesn’t have any definite timeline for securing a site. Factors include cost, zoning and proximity to other residences.

“Should the right parcel become available, we’d be able to move rather quickly,” Savage said. “But it will require some alignment of the stars, as it does with any major project like this.”

As for construction cost, the materials needed to build each tiny house are estimated at $10,000 – or less, if any materials are donated.

St. James has committed enough money to build one of the houses, and one of Pearson-Campbell’s tasks is to enlist more churches and community groups to give money or even assemble one of the houses themselves as a service project. Johnson’s students eventually hope to develop assembly instructions that will make it easy for those groups to build the houses themselves, similar to an IKEA furniture kit, Johnson said.

The moral ethic Johnson sees in many of his students often materializes as a desire to build energy-efficient buildings, he said, but this project is built on a sense of social responsibility.

“If this can give those who are homeless an opportunity to resolve the issues that place them in a homeless circumstance, we owe it to them to give them that opportunity,” he said.