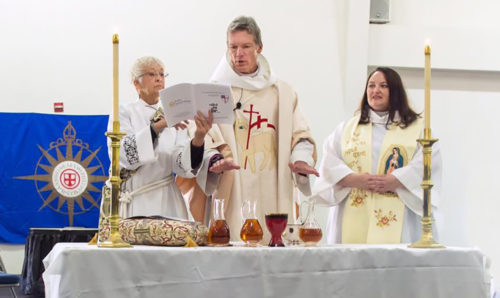 Rice was the only nominee.  He was elected on the first ballot by a vote of 21 to 1 in the clergy order and 41 to 2 in the lay order. The election required a two-thirds majority in both orders. The somewhat unusual election was both joyous and powerful, he said.

“I believe the people of the Diocese of San Joaquin know ever increasingly that they are on a hikoi (intentional movement with a purpose [a word from Maori, the indigenous language of New Zealand]) and they have come to realize and celebrate my willingness, better said, call to walk, run, cycle, move with them,” Rice said in an email to the Episcopal News Service following the election.

“As for my own feeling and response, I couldn’t imagine a group of people with whom I’d rather share this hikoi of faith.”

Cindy Smith, president of the standing committee, said the move, made possible through adoption of a new canon at the diocese’s October convention, represented not only a commitment to each other, but also a commitment to continued ministry to the people of California’s Central Valley.

“We’re going forward and not to just survive but to thrive,” Smith said in a telephone interview March 6. “There is so much to be done now in the Central Valley of California with issues of trafficking, immigration, and a very high percentage of the population incarcerated.”

The Rev. Canon Anna Carmichael said the gathering, the first major event since 2007  held at St. James Episcopal Cathedral, also represented, for many, a homecoming. About 200 people attended the event.

“It was wonderful, a great homecoming for many folks because it was their first time at the cathedral since the schism happened ten years ago,” said Carmichael, diocesan canon to the ordinary.

“We were able to do a blessing of the space as our coming home experience. We had a wonderful Eucharist, and a presentation on stewardship and then we took the vote and did all the necessary procedural things. It was a lovely gathering.”

Smith said consent packages soon will be mailed to dioceses throughout the Episcopal Church, A majority of both the Episcopal Church’s diocesan standing committees and bishops with jurisdiction will have to consent to Rice’s election as diocesan, as is required in all bishop elections.

Within that context, “to elect a bishop that we can call our own and who calls us his, is really powerful and meaningful for this diocese,” Carmichael said. “It was historic.”

She added that San Joaquin Episcopalians are hoping for a speedy and smooth consent process.

“We are hosting one of Presiding Bishop Michael Curry’s revivals in November, and it is our hope that, provided the larger church affirms this call and affirms the vote that we took, that Bishop David will be seated as our bishop while the presiding bishop is here.”