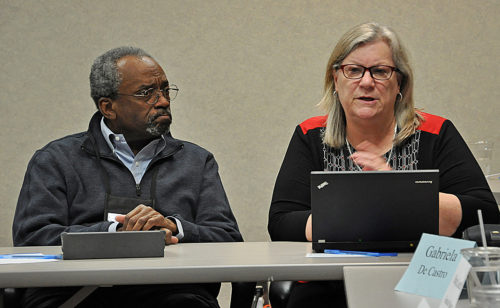 Presiding Bishop Michael Curry and House of Deputies President the Rev. Gay Clark Jennings, shown here at the Executive Council’s October 2016 meeting, say they anchored their decision to be the lead signers on a U.S. Supreme Court amicus brief in the theological understanding that all people are created in the image of God and thus entitled to equal protection under the law. Photo: Mary Frances Schjonberg/Episcopal News Service

The “friend of the court” brief comes in the case of G.G. v. Gloucester County School Board, which the American Civil Liberties Union and its Virginia chapter filed on behalf of Gavin Grimm and his mother, Deirdre Grimm, in June 2015.

The signers urge the high court to see that the ability to live in a country that guarantees transgender equality is a religious freedom issue. They said their faith communities have approached issues related to gender identity in different ways, but are “united in believing that the fundamental human dignity shared by all persons requires treating transgender students like Respondent Gavin Grimm in a manner consistent with their gender identity.”

The signers urged the court to address the civil rights of transgender persons according to religiously neutral constitutional principles of equal protection under the law. Doing so, they said, “will not impinge upon religious belief, doctrine, or practice” and instead will adhere to the Constitution’s prohibition against favoring one religious viewpoint over any others.

Curry anchored his support of the brief in Genesis 1:26-27, which declares that every human person is created in the image and likeness of God.

“This divine decree proclaims the inherent sacredness, dignity, worth, and equality of every human person, by virtue of their creation imago Dei,” he said. “The way of love for God and our neighbor that Jesus taught is the way to honor the sacredness, dignity and worth and equality of each person. For this reason, we work for the equality and dignity of transgender people, who, like the rest of us, are created in God’s image and likeness.”

Jennings said Jesus tells his followers to love God and love their neighbor as themselves. “And, he tells us not to be afraid. The Episcopal Church affirms the victory of love over fear by supporting local, state and federal laws that prevent discrimination based on gender identity or gender expression,” she said.

That support dates at least to General Convention’s 2009 meeting, when bishops and deputies passed Resolution D012 opposing laws that discriminate against people based on their gender identity. It was in that vein that the Church’s Executive Council said in June 2016 that it opposed North Carolina’s “Public Facilities Privacy & Security Act,” as well as “all legislation, rhetoric and policy rooted in the fear-based argument that protecting transgender people’s civil rights in the form of equal access to public accommodation puts other groups at risk.”

Jennings noted that the last resolve of council’s resolution (AN014 on page 8 here) encourages Episcopalians to work against legislation that discriminates against transgender people and for legislation that prevents such discrimination, and to communicate the church’s position to courts, policymakers and others across the United States.

“For the two of us to sign this amicus brief, that’s not a leap at all,” Jennings said. “We’ve already said as a church that’s what you do.”

The outline of the case

The case took shape in 2014 after Grimm and his mother told school administrators of his male gender identity at the beginning of his sophomore year. With their permission, he used the boys’ restroom for almost two months without any incident, according to the original complaint. However, some parents and other Gloucester County residents objected, prompting the school board to adopt a policy that limited students’ bathroom use to the one of “the corresponding biological genders” or “an alternative appropriate private facility.”

The complaint said the policy stigmatizes Grimm, who is now 18 and will graduate this year. He is the only student in the high school using the private bathroom and this practice marks him as different, isolates him and exposes him to “serious psychological harm,” according to the complaint.

The lawsuit argues the bathroom policy is unconstitutional under the Fourteenth Amendment, which guarantees equal protection under the law, and violates Title IX of the U.S. Education Amendments of 1972, a federal law prohibiting sex discrimination by schools.

ACLU attorneys asked the district state court for preliminary injunction in time for Gavin to be able to use the same restroom as other boys when classes resumed for the 2015-16 school year. The district court denied the request and dismissed the Title IX claim. The U.S. Court of Appeals for the Fourth Circuit overturned the lower court in August.

The Gloucester County School Board successfully petitioned the U.S. Supreme Court to review the appeals court decision. The Fourth Circuit’s ruling is on hold, pending the higher court’s ruling.

The case was complicated on Feb. 22 when President Donald Trump revoked the Obama administration’s interpretation that Title IX required schools to “treat transgender students consistent with their gender identity.” The next day the Supreme Court asked the main parties for their views on how the case should proceed. The Fourth Circuit Court of Appeals relied heavily on that guidance in its ruling.

Attorneys for Grimm on March 1 urged the justices to proceed with the current schedule for March 28 oral argument. The school board suggested putting off the case at least until April to allow the federal government to weigh in, SCOTUSblog reported.

Religious freedom for all

Religious freedom is a main concern in the amicus brief. Permitting religiously based anti-transgender types of laws would enshrine religious beliefs in the country’s law and implicitly favor religious viewpoints that reject the existence of transgender persons over those who embrace such persons’ existence and dignity, the signers said.

“The First Amendment forbids both forms of religious favoritism,” they said.

“Here, a public school student who happens to be a transgender boy seeks no more than to use the same toilet facilities as every other boy in his school,” they said at the conclusion of the brief. “Forcing him instead to use stigmatizing separate facilities humiliates him for no apparent reason other than to appease religious views denying the existence of his gender identity.”

The signers said that causing Grimm such harm is inconsistent with their belief “as a matter of law, religious faith, and fundamental decency – that transgender students should be treated with equal dignity and respect.”

Jennings said the opposing claims of religious freedom were at the heart of hers and the presiding bishop’s interest in joining the brief. “We oppose all legislation that seeks to deny the God-given dignity, legal equality, and civil rights of transgender people,” she said. “We support transgender equality not in spite of our Christian faith, but because of it.”

Jennings said the brief very clearly says that religious freedom belongs to all Americans, not just one group’s theology.

Curry and Jennings have acted on Executive Council’s admonition to confront discriminatory laws before. Shortly after council acted in June, Curry and Jennings wrote to the Episcopal Church explaining their opposition to the North Carolina bill and saying that they had written to the state’s governor and members of the state’s General Assembly, calling on them to repeal the bill.

Last month, they wrote to the speaker of the Texas House of Representatives to praise his opposition to a “bathroom bill” in that state.

This is the second time in two years that Jennings has taken the lead in filing amici briefs with the Supreme Court. In April 2015, she was a lead signer on an amicus brief filed by nearly 2,000 individual lay and ordained religious leaders in the Supreme Court case on same-sex marriage known as Obergefell v. Hodges and Consolidated Cases.

More information about the Gloucester County School Board suit, including legal filings, is here.