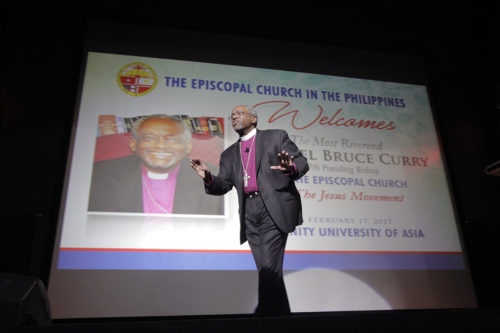 Longtime covenant companions, the Episcopal Church and Episcopal Church in the Philippines entered a new commitment to remain in partnership and to learn from one another in the areas of program, mission and ministry.

“The [concordat] is intentionally designed as a partnership between two equal partners in the gospel,” said Curry, in an interview with Episcopal News Service, following the document’s signing. 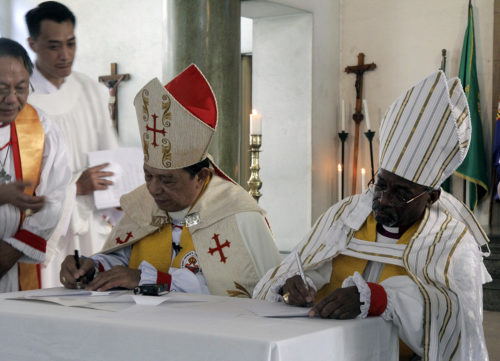 The bishops signed the concordat, based in friendship, cooperation and mutual respect, during a Feb. 18 Eucharist at the Cathedral of St. Mary and St. John in Quezon City, a part of metro Manila. Clergy traveled in some cases more than 12 hours to witness the historic document’s signing. Curry made the Philippines his first of four stops on a tour of Asia and Southeast Asia that included Hong Kong, China and Taiwan.

“The [concordat] fully commits us,” said Renato, following the concordat’s signing. “It’s not just a document.”

The companion agreement, as it’s defined in the concordat, was six years in the making, said Peter Ng, the Episcopal Church’s officer for Asia and the Pacific, now retired, who accompanied Curry on his visit, along with the Rev. Charles Robertson, canon to the presiding bishop for ministry beyond the Episcopal Church; the Rev. David Copley, director of global partnerships and mission personnel; Neva Rae Fox, the church’s public affairs officer; and Sharon Jones, executive assistant to the presiding bishop.

The Episcopal Church established a missionary district in the Philippines in 1901, when the United States controlled the archipelago. In 1965, the church became a missionary diocese; and in 1990 the Episcopal Church of the Philippines became an autonomous province of the Anglican Communion. At the time of autonomy, the two churches established a covenant relationship, whereby the U.S.-based church continued to provide the Philippine church with 60 percent of its operating budget.

During a visit to the Philippine church’s national headquarters in a brand-new building on its 37-acre compound in Quezon City, which also includes Trinity University of Asia and St. Andrew’s Theological Seminary, the presiding bishop and his staff heard a presentation by Floyd Lalwet, the Philippine church’s provincial secretary, about its story from financial dependence to self-sufficiency.

Two years after becoming an independent province the Joint Committee on the Philippine Covenant in 1992 proposed a 15-year plan to gradually reduce the support from the Episcopal Church from $800,000 to $533,333 to $267,667 over five-year intervals. 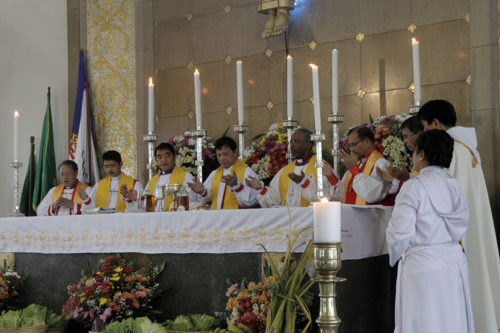 Presiding Bishop Michael Curry preached and concelebrated alongside Prime Bishop Renato Abibico during a Feb. 18 Eucharist at the Cathedral of St. Mary and St. John. Curry made the Philippines his first of four stops on a tour of Asia and Southeast Asia. Photo: Lynette Wilson/Episcopal News Service

In 2004, a year after the Philippine church ran its highest-ever budget deficit, its leadership, by then worried for the church’s survival, contemplated asking the Episcopal Church for a three-year extension. After heated debate, however, the church reversed course and decided rather than prolong its dependence, it would become independent on Jan. 1, 2005, two years before the agreement expired, explained Lalwet.

“It took the leadership to change its thinking,” he said, adding that in 2005, after implementing the church ended the year with a $60,000 surplus.

The covenant relationship between the U.S.-based Episcopal Church and the Episcopal Church in the Philippines remained intact in 2005, but rather than use the subsidy for operating expenses the money was added to the church’s Centennial Endowment Fund, established in 2001.

Today, the church is renovating its headquarters’ campus, with plans to build a new, state-of-the-art hospital to replace nearby St. Luke’s Hospital and to build a new seminary to replace St. Andrew’s. The church has also implemented a Receivers to Givers policy, changing the church’s mindset from one of dependence to independence. The shift in mindset and financial independence, Lalwet said, has changed the culture of the church and has instilled a sense of pride in its members.

There was a time, he said, when friendly visits were a setup, “at the end of the day we were just there to ask for something. Today, when we sit at the table, we sit as partners, and that has strengthened the relationship and made it more exciting. People here are happy they can share something.” 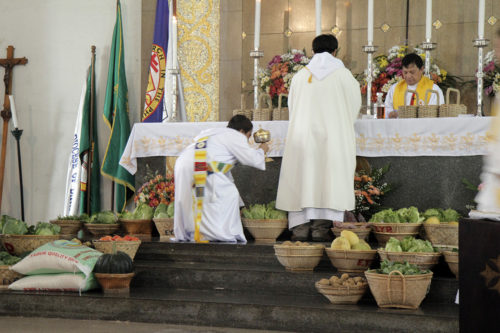 Organic vegetables were carried from as far as six hours to be set on the altar as part of the offertory. Photo: Lynette Wilson/Episcopal News Service

The Episcopal Church in the Philippines’ autonomy journey is a story of miracles; a model that the rest of the Anglican Communion, including the Episcopal Church, can learn from, said Curry, in an interview with ENS.

“By miracle, I mean, a miracle that resulted from people being in partnership with God and doing the hard work, and it actually worked,” said Curry. “The Episcopal Church in the Philippines has learned how to maximize its assets, and as a result, it is experiencing new life.”

For the Rev. Thomas Maddela, St. Andrew’s registrar and a liturgics professor, the presiding bishop’s visit marked an occasion “to look back at our mother church and to share our stories and our continuing struggles” and to assure the church’s commitment to cooperation.

In the past, he said, the Philippine church reflected the American church’s influence. Autonomy, however, changed that and in 2001, during the church’s centennial celebration, it introduced its version of the Book of Common Prayer, which was revised in 2014 and is now in the process of being translated into four languages.

Increasingly the church reflects the “culture of the people,” said Maddela, in an interview with ENS outside the cathedral. 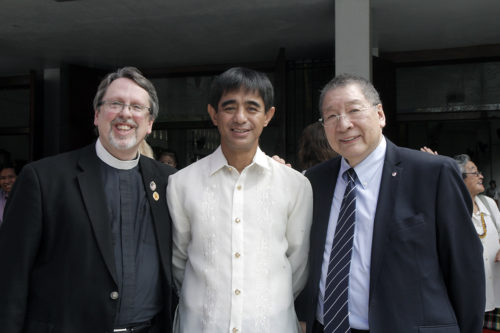 “Visits from presiding bishops are very symbolic,” said Lalwet. “Whenever a presiding bishop comes here he or she is considered family, one of us. And the people are so excited.”

Curry’s visit, said Lalwet, also came at a time when Filipinos, some of them frustrated by the actions of the country’s controversial president, Rodrigo Duterte, and his war on drugs, needed to hear a positive message.

On Feb. 17, the day before he preached at the cathedral, Curry gave a keynote address focused on the Jesus Movement to a packed audience of students and seminarians at Trinity University of Asia on the 20th anniversary of the covenant agreement.

“God likes to work through movements of people to change the face of the earth,” he told the students and seminarians, referencing Abraham and Sarah, and Moses.

“Love of God and love of neighbor … that’s a formula for transforming the world,” said Curry, as he walked across the stage. “And you’ve got to love God because that’s the source from whom you are made.”

“Following the way of Jesus sets folk free, and it brings folk together … The truth is we are one in Jesus Christ, and that’s a message not just for the church but the world.”

Curry’s address stirred applause from the crowd. The students and seminarians were “very excited,” said the Rev. Gloria Mapangdol, dean of St. Andrew’s Seminary. “It was the first time they’d heard ‘an evangelist’ talk like that.”

His message resonated with seminarians – 48 total, 19 females — who are required to apply what they learn in the classroom to their field work, said Mapangdol.

In Manila, Curry also visited the Iglesia Filipina Independiente, or the Philippine Independent Church, a full-communion partner with the Episcopal Church since 1961.

It was a blessing, said Curry, for him to visit the IFI, a church rooted in revolution.

“God came among us as the person of Jesus to start a revolution,” said Curry. “The IFI is a church crusading for justice.”

-Lynette Wilson is an editor/reporter for Episcopal News Service.