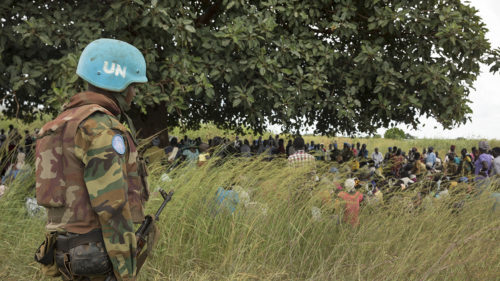 Six thousand people at Kuda, South Sudan, were among those displaced by violence last year in the region of the country where famine has since been declared. A U.N. team visited the area in September to assess the humanitarian and security situation. Photo: United Nations

[Episcopal News Service] The relief agencies of the Episcopal Church and its Anglican partners are considering a possible expansion of their support of relief efforts in South Sudan after the United Nation’s recent famine declaration, which has drawn increased international attention to the growing crisis in the country.

The famine declaration on Feb. 20 was the first by the United Nations since 2011 in Somalia. It blamed war and a collapsing economy for leaving 100,000 people at risk of starvation in the north-central part of South Sudan, and 1 million more people were said to be on the brink of famine.

The U.N. uses a technical classification to determine whether a food security crisis has escalated into a famine. A declaration is issued when at least 20 percent of the population faces a food shortage, at least 30 percent is suffering from malnourishment and at least 2 people out of 10,000 are dying from starvation each day.

In the affected parts of South Sudan, as in all famine-stricken sites, the declaration indicates that people already have begun to die from lack of food. The situation in South Sudan is further complicated by the fact the crisis is largely man-made, and years of violence have challenged relief efforts.

“There is only so much that humanitarian assistance can achieve in the absence of meaningful peace and security, both for relief workers and the crisis-affected people they serve,” Joyce Luma, the director in South Sudan for the U.N.’s World Food Program, said in the U.N. news release.

Episcopal Relief & Development has been active for more than two years supporting local efforts to provide food aid in South Sudan, through its partners in the Anglican Alliance and by working with relief agencies and diocesan leaders in the country. The organization has a continuing presence in areas that, while not meeting the definition of famine until now, have long been dealing with extreme food shortages, said Nagulan Nesiah, senior program officer for disaster response and risk reduction.

The famine declaration “has sort of caught up to what has been a reality for the (local) church for the past few years,” Nesiah said. He welcomed the move by the U.N., which will draw needed attention to the crisis.

The Episcopal Church is one of several partners within the Anglican Communion that coordinate relief efforts under the umbrella of the Anglican Alliance, which recently held a conference call with Episcopal Relief & Development and other agencies to discuss the worsening situation in South Sudan.

Episcopal Relief & Development plays a leading role in the Anglican Alliance’s work with the Sudanese Development and Relief Agency, or SUDRA, and through those efforts, food packets have been provided to 58,400 people in a dozen dioceses in the country since December 2014, Nesiah said. Episcopalians can still support these efforts by donating online, and a new fundraising appeal is being discussed.

Top religious leaders, too, have begun speaking out about the conflict and the resulting famine.

“We stand prayerfully alongside the South Sudanese people and their leaders – particularly those in the Church who are providing emotional, physical and spiritual support,” Archbishop of Canterbury Justin Welby said Feb. 20 in a statement released while he was on a tour of four African countries near South Sudan. “We pray for those on the ground who are delivering humanitarian assistance, that there will be an opening up of humanitarian corridors for the aid that is so desperately needed.”

Province of Central Africa Archbishop Albert Chama, who chairs the Council of Anglican Provinces of Africa, or CAPA, issued a statement Feb. 22 condemning the violence in South Sudan.

“CAPA will work with willing leaders from the region and further afield, to try to urge the warring parties to agree to an immediate ceasefire,” Chama said. “They must realize that Almighty God will require everyone to account for their actions here on earth.”

Primate’s World Relief and Development Fund, which handles humanitarian outreach for the Anglican Church of Canada, announced on Feb. 24 a $25,000 grant to provide relief in South Sudan, as well as another $25,000 grant for Kenya. That money was given to Act Alliance, a relief partner that is separate from the Anglican Alliance.

The United Nations, in announcing its famine declaration, called it the “worst hunger catastrophe” in the three years of fighting between the Sudan People’s Liberation Army, which supports President Salva Kiir, and a rival group that backs Riek Machar, a former vice president.

South Sudan isn’t the only country facing a food crisis. The World Food Program said three more are at risk of famine this year: Somalia, Nigeria and Yemen.

“The specter of simultaneous famines in four countries poses an unprecedented challenge to the humanitarian community as well as a personal tragedy for hundreds of thousands of people,” the WFP said Feb. 23 in a blog post.

Burundi is another country where the threat of famine has mobilized the Anglican Church and its relief partners. Distribution of food and other items has begun in part of the country, Anglican Communion News Service reported Feb. 27.