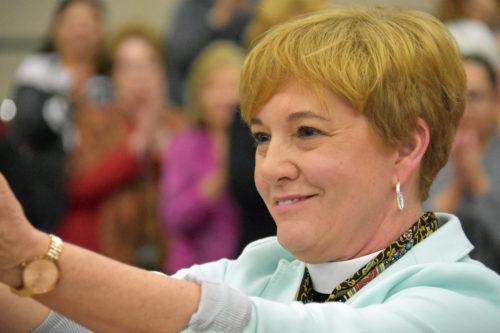 She is the first woman to be elected bishop in the Diocese of West Texas. Brooke-Davidson, 56, is currently the vicar of St. Elizabeth Episcopal Church in Buda, Texas, and was one of seven nominees. Now as the sixth bishop suffragan of the diocese, she will serve alongside diocesan Bishop David M. Reed.

In order to be elected, a candidate needed to receive a simple majority of votes from both the clergy and the lay delegates, voting separately as orders on the same balloting round. Brooke-Davidson secured election on the sixth ballot, receiving 55 number of clergy votes and 153 number of lay votes, with 49 and 151 needed, respectively, for election.

After thanking the other six nominees and saying what a privilege it was to walk with them on this journey, Brooke-Davidson said, “We will be good friends forever.”

She then quoted a passage from the second chapter of 1 Corinthians, saying, “Your faith should not stand in the wisdom of men, but in the power of God.” Brooke-Davidson said, “With God, anything is possible, and I suppose it is possible that God can make me a bishop.”

Pending consent of a majority of the bishops with jurisdiction and the diocesan standing committees, Brooke-Davidson will be ordained and consecrated as bishop suffragan during a worship service held on July 29, at The Episcopal School of Texas in San Antonio. Presiding Bishop Michael Curry will preside.

Brooke-Davidson was ordained a priest in 2009 after graduating from Fuller Theological Seminary and has served as vicar of St. Elizabeth since 2011. She served as the assistant rector of St. Stephen’s Episcopal Church in Wimberley, Texas, from 2009-2011. Prior to ordination, Brooke-Davidson practiced commercial financial law for 12 years. She is married to Carrick Brooke-Davidson, and they have two grown daughters, Emma and Kate.

The other nominees in the election that took place at the American Bank Center in Corpus Christi, Texas were: