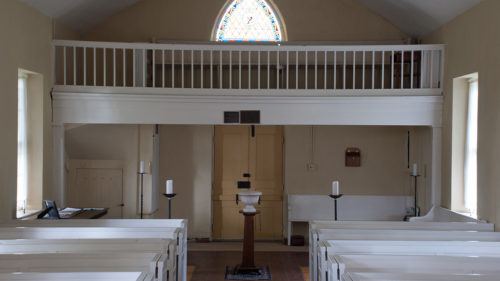 A balcony once used as the “slave gallery” is still a feature of St. John’s Episcopal Church in Kingsville, Maryland, as detailed on the Trail of Souls website.

[Episcopal News Service] Slavery is a thread stitched indelibly throughout the early history of the Episcopal Church in Maryland, where congregations to varying degrees enabled, benefited from or fought against the enslavement of Africans until slavery was outlawed by the state in 1864.

In the capital, Annapolis, St. Margaret’s owned a plantation in the mid-18th century where up to 100 enslaved laborers worked, and slaves likely built most of the congregation’s early structures.

Over on the west end of the state, Emmanuel Church in Cumberland is well known today for once being a stop on the Underground Railroad, helping slaves escape north to freedom.

Nearly two dozen congregations across Maryland have researched and recorded a multitude of stories like these as part of a racial reconciliation project called Trail of Souls that is now in its third year. In addition to an annual pilgrimage to some of the sites, the Diocese of Maryland project’s focal point is a website offering a digital tour through the history of the 23 churches and their relationships to the institution of slavery.

It isn’t always a comfortable topic for Episcopalians.

“Not everyone likes to deal with the history of slavery,” said Reba Bullock, who leads the diocese’s Research and Pilgrimage Working Group. The group works with congregations to uncover such historical details, and it now is recruiting more churches to join the effort.

“Sometimes there is a little reluctance, but once they get on board they get excited because they find out things about the history of the church that they didn’t know,” Bullock said.

In one congregation, Bullock said, a local professor volunteered to do the research and discovered that slaves once attended Sunday worship services in a balcony apart from the white members of the congregation, and some slaves had been buried in the church’s graveyard. 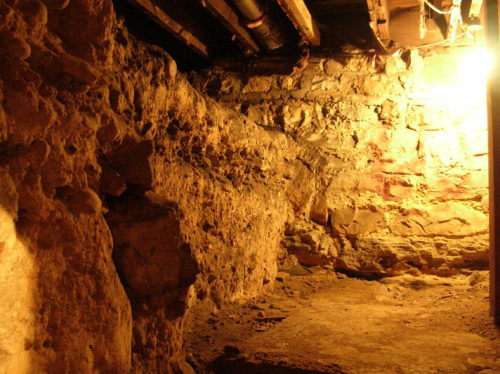 This tunnel under Emmanuel Church in Cumberland was said to have been used to hide slaves escaping north to freedom as part of the Underground Railroad. Photo: Emmanuel Church.

The Trail of Souls website also includes information on Emmanuel Church, which likely became a stop on the Underground Railroad after the arrival of the Rev. David Hillhouse Buel, who was active in the effort to free slaves. The congregation may not even have been aware at the time that the church was being used by the Underground Railroad, according to its Trail of Souls page.

Middleham and St. Peter’s Episcopal Church in Lusby on Chesapeake Bay notes in its Trail of Souls history that many priests owned slaves before the Civil War. And at St. Margaret’s in Annapolis, the congregation took the additional step of dedicating five historical markers at the church, acknowledging the range of ways the church took advantage of slaves but also ministered to them.

Michael Winn was part of a team that already had been researching the history of St. Margaret’s when the diocese called on congregations to join the Trail of Souls. Some of what the St. Margaret’s team found was shocking, such as records showing the vestry in the early 1800s considered buying and selling slaves to support the church financially. (The church never acted on the proposal.)

“What we’ve kind of done is open the door to understanding that what happened in the past is not the past that we want,” Winn said, but it serves as a challenge, to re-examine and reaffirm our beliefs in the context of that history.

The Diocese of Maryland has been on the leading edge of the Episcopal Church’s dialogue on racial reconciliation. It formed an anti-racism committee and reparation task force in the early 2000s, and in 2010, Bishop Eugene Taylor Sutton dissolved those bodies to refocus the diocese’s efforts by forming a Truth and Reconciliation Commission, said the Rev. Angela Shepherd, who initially chaired that commission.

Race has become a regular topic in recent decades at the Episcopal Church’s triennial General Convention. Shepherd, the Diocese of Maryland’s canon for mission, said the diocese has been active in those efforts because of Sutton’s leadership and that of his predecessors.

More than 600 people have completed the diocese’s anti-racism workshop, Shepherd said, and the discussion on issues of race has continued through film screenings, interactive theater and adult forums.

The launch in 2014 of the Trail of Souls website and its inaugural pilgrimage was timed for the 150th anniversary of Maryland outlawing slavery, and the project took its cue from a 2006 resolution from General Convention that called on all dioceses to research and document the church’s complicity with slavery and history of segregation and discrimination.

“The research has led to local interest. It has gone beyond a historian creating a document that’s posted,” Shepherd said. She described a conversation she had with a white parishioner who said he knew his church had been built by slaves but didn’t fully appreciate the significance until the congregation identified those slaves by name and read them out loud during a service.

It is such moments of awakening that the diocese hopes to foster through the Trail of Souls, a project that Shepherd said could be replicated in dioceses around the country.

“I would advise people not be afraid,” she said. “I think people are afraid of discovering the truth of the past, but I think the call to reconciliation is a call to be reconciled to our past.”