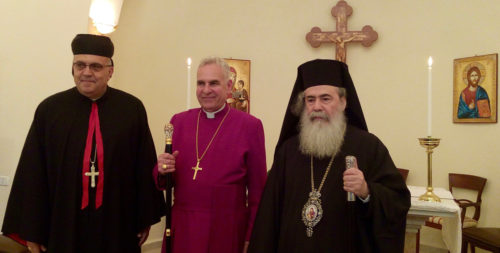 the Rt. Rev. Musa Haj, bishop of the Maronite Church in the Holy Land (left) and His Beatitude Theophilos III, the Greek Patriarch (right) participated in the Feb. 21 service led by Anglican Archbishop of Jerusalem Suheil Dawani.

His Beatitude Theophilos III, the Greek Patriarch; the Rt. Rev. Musa Haj, bishop of the Maronite Church in the Holy Land; Samir Asie, imam of Al-Jazzar Mosque, and representatives from the Muslim, Jewish and Christian communities joined an estimated 700 people for the service. Many of the attendees had longed for the re-opening and reviving of the church since the majority of its congregation, concerned about their security situation, left Acre in 1948.

Acre is an extraordinary corner of the Holy Land, with one of the best natural harbors in the region. It has been a prominent city since it was mentioned in the tribute list of Pharaoh Thutmose III in the 16th century BCE. Before its capture by the crusaders in 1104, it had been held by the Egyptians, the Phoenicians, Persians, the Greeks and the Ummayads. St. Paul visited it (cf. Acts 21.7), referring to it as Ptolemais and within 150 years it had a bishop.

Acre became the port where pilgrims disembarked. The Crusaders built a complex fort with tunnels, churches and hospitals. It was captured by the Muslim commander Saladin and re-taken by Richard-the-Lion-Heart, before being re-captured by the Mamelukes, the Ottomans, the Egyptians, the Turks and the British.

The Anglican presence in Acre is more recent. The Church Mission Society opened schools in 1874 and 1887, and developed a small hospital. In 1946 Archdeacon Campbell McInnes (later archbishop) with the Rev. Najib Cubain (later the first Palestinian to become an Anglican Bishop) were present when the foundation stone was laid. Bishop Stewart dedicated the church in 1947.

St. Saviour’s Church in the northern Israel town of Acre had been closed since 1948.

The church quickly thrived, and although a small building, the congregation was said to number 500. However, in 1948 the Christians in Acre became increasingly worried about their safety and that of their families. Many left the city, with a large number going to Lebanon. Over the next 40 years, St. Saviour’s, without a regular priest or congregation, fell into a state of disrepair.

For the diocese, the re-dedication of St. Saviour’s marks an extraordinary moment – this is the second church to be rededicated by Archbishop Duwani. In 2011 St Paul’s in Jerusalem, closed in 1948, was re-dedicated. The diocese is now focused on re-dedicating St. Peter’s in Jaffa, which has been closed since 1948.

Such ministry shows the dedication and the tenacity of the Diocese of Jerusalem, while small in number – there are between 5,000 and 7,000 Anglicans spread over the five countries: Lebanon, Syria, Jordan, Palestine and Israel. The diocese continues to minister in some of the most difficult places and with enormous obstacles, whether that be its hospitals in Gaza and Nablus or reviving closed churches.

The re-opening of St. Saviour’s points to one of the central missions of this Church in the Holy Land: to foster ecumenical and inter-faith relationships which are at the heart of the ministry of reconciliation and peace towards which the Diocese of Jerusalem works.

During the rededication, the Greek patriarch spoke warmly of the renewed Anglican presence in Acre. The imam expressed his excitement that a new place of worship in the community was now open. And, the archbishop noted in his sermon that for Christians communities in the Holy Land “there [must be] resurrection after death, light after darkness, and hope after sadness.”

He went on to say that: “[i]f the church of today does not carry this message of the resurrection and hope then our ministry is in vain. Our land needs the spirit of the resurrection… and any thinking that does not present hope for our people in the Holy Land will not be a theology either for the present time or for the future.”

There is a real hope, he said, that St. Saviour’s can create a worshipping community that leads “leads us to goodness, security, justice, peace, and prosperity for all.”

The diocese has a new confidence that Anglicans in Acre can once again thrive, according to the Very Rev. Hosam Naoum, Dean of St George’s Anglican Cathedral in Jerusalem. Here in the Holy Land where stories of pain and suffering are a daily reality; St. Saviour’s is a genuine story of “Good News,” he added.