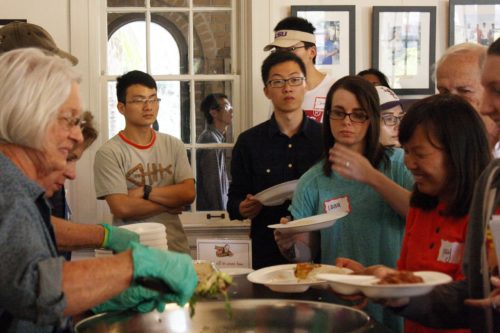 More and more international students at Louisiana State University in Baton Rouge have been coming to the Lunch with C.S. Lewis program offered by St. Alban’s Episcopal Chapel. Photo:Diocese of Louisiana

[Episcopal Diocese of Louisiana] “At St. Alban’s Chapel, we focus our energy on hospitality, preaching the Gospel, and music,” remarked the Rev. Andrew “Drew” Rollins on a recent Wednesday afternoon. “If we are strong in those areas, we will do well. But if we falter in any of those areas, nothing else will make up the difference.”

Rollins is the chaplain of St. Alban’s Episcopal Chapel located on the campus of Louisiana State University in Baton Rouge. He and 15 volunteers had just served a meal of red beans and rice to 200 students. For the past 10 years, after the end of Wednesday morning classes, LSU students have found their way to the warm hospitality of the chapel for a free lunch and a message about what C. S. Lewis, the much-loved Anglican theologian, termed “mere Christianity,” those beliefs that almost all Christians at almost all times have held in common. The ministry is called Lunch with C.S. Lewis.

Lately, though, the ministry has changed in a way that challenged how the people of St. Alban’s lived out their call to be fully open to all God’s people. This challenge came in the form of a language barrier because international students have begun finding their way to St. Alban’s.

A map on the wall is dotted with about 25 pins showing the home countries of the students. During lunch, you can hear many languages being spoken. Spanish, English, Chinese, Italian, Russian, Sinhala, Portuguese and German are just a few of them. Rollins jokes, “For 45 minutes, each Wednesday, I guarantee our parish is one of the most culturally diverse spaces in any Episcopal campus ministry anywhere.”

“At first, the international students attending the lunch would eat their meal and politely sit through the teaching,” said Rollins. “However, we began noticing a murmur in the hall that just grew louder over time. I realized we were not connecting with these students and that was not acceptable to us.”

Rollins went on to say, “I read a statistic that something like 70% of international students will never be invited into an American home. What if St. Alban’s is their only exposure to an American church? We had to change the way we ministered to these students.” 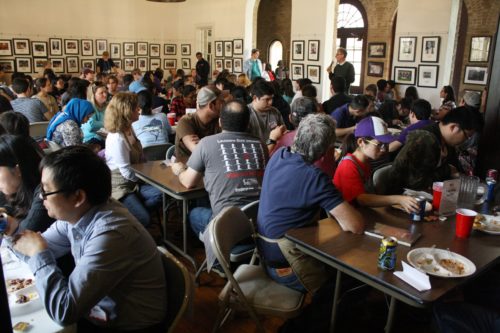 Last semester, the Lunch With C.S. Lewis planning team gathered to come up with a strategy on how they could better connect with and minister to all students who walked through their doors. The changes were implemented this month.

“I am doing a series of short talks titled First Meetings with Jesus based on episodes from the gospels,” said Rollins. “Last week, for the first time, we had the Bible passage on which I was teaching read in English, Chinese and Spanish by students from those cultures. A student from China read a passage from Matthew into the microphone to the whole group. When he finished, the students spontaneously erupted in applause. It was so moving. It was a Day of Pentecost moment.”

Indeed, the Holy Spirit has been moving. Rollins recalls recent activity on campus. “Last Wednesday, many of the international students walked over to our lunch from the student quad where they had been attending a protest of the immigration ban,” he said. “We did not need to make any statement about the politics. We simply did what we always do, which is to welcome these students into the church and feed them. That speaks volumes.”

St. Alban’s is also giving away copies of the Bible in Spanish, Chinese and English. “We had several students go out of their way to request a copy in their native language,” said Rollins. “We want the students to know we are paying attention to their needs by providing lessons and scripture in their native tongue. We want to build trust with the students, not just allow them to be present.”

Rollins said international musicians will soon be a part of the lunch program and clergy from the diocese and the pastor of Baton Rouge Bethel AME Church will also teach sessions this spring.

“Teams of volunteers from other Episcopal churches often help serve the meals. Many of the churches in the diocese sponsor a meal,” he said. “We encourage everyone to come see what makes this ministry so special and to show the students, who will eventually return to their home country, what it means to be the church in America.”

Founded in 1928, St. Alban’s Chapel was the first Episcopal chapel in the United States to be built on the campus of a state university. Under the terms of a lease signed by Huey P. Long, St. Alban’s cannot operate on any basis except that of ministering to students. For 88 years, the congregation has pursued that mission of hospitality to the students, faculty and staff of Louisiana State University. Rollins has served as St. Alban’s chaplain since 2004.

— Karen Mackey is the communication coordinator for the Episcopal Diocese of Louisiana.