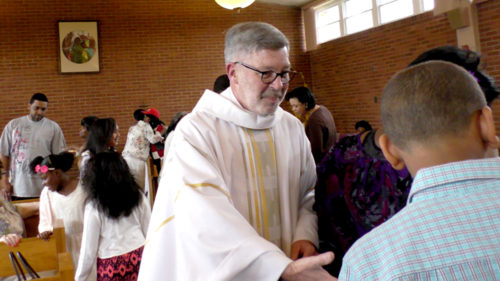 [Episcopal News Service] St. Louis has been called America’s “murder capital” after a recent spike in gun violence that resulted in more killings per capita than any other major U.S. city.

Chicago recorded the most total homicides in 2016 at 762, but for a smaller city like St. Louis, its 188 killings last year are part of an alarming local trend that has prompted a renewed focus – including by the Episcopal Diocese of Missouri – on the causes and possible solutions of such violence.

“One death is too many,” the Rev. Marc Smith said, but developing a plan of response to 188 deaths defies easy answers. “Looking for the elegant, simple solution is wrong,” he said. “It is an incredibly complex problem.”

Smith is the Diocese of Missouri’s point person in the search for answers. Last year, he was named by Bishop Wayne Smith to the newly created position of deputy for gun violence prevention, and this year, the diocese and community are beginning to see some of the early fruits of his efforts.

One of his tasks is to help 36 community organizations coordinate more effectively on the issue of gun violence, but he’s also trying to mobilize Episcopalians at the parish level to work toward a tangible first goal: giving away gun locks to gun owners.

Accidental shootings and suicides often are overlooked in the debate over gun violence, Smith said, but this danger is “probably the easiest to solve.” He sent a letter to clergy in the diocese earlier in February outlining the diocese’s new partnership with Washington University’s School of Medicine and a group called Women’s Voices Raised for Social Justice to support the group’s Lock It for Love initiative. 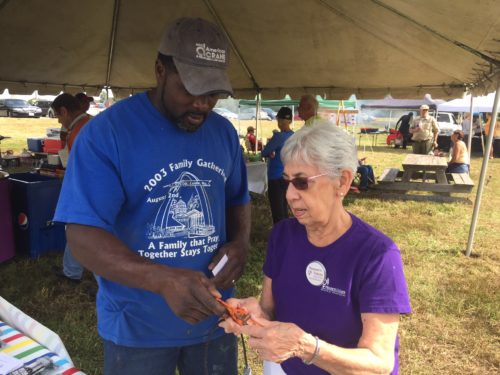 Lock It for Love aims to reduce the frequency of suicides and accidental shootings by children by distributing gun locks for free. Since April 2015, Women’s Voices Raised has given out about 1,500 gun locks to families, mostly at health fairs and similar events, president Lise Bernstein said.

“Sometimes the issue of gun violence can just seem overwhelming and frustrating and depressing,” Bernstein said. The focus on gun locks was a way to rally the community around a hands-on solution to one slice of the larger problem.

“We are very much interested in engaging as many people in the community as possible in addressing this issue of kids and keeping kids safe,” Bernstein said, “so the interest of the diocese is very welcome.”

Bernstein and Smith also share the belief that gun violence should be tackled as a public health issue, an approach that draws on Smith’s experience as a health care administrator, including more than a decade as president of the Missouri Hospital Association.

Smith, who grew up in the St. Louis area, left the health care industry to become an Episcopal priest and was assigned in 2011 to his first congregation, the Church of the Ascension on St. Louis’ north side. About six months into the job, he remembers attending the wake and funeral of a woman who was killed in a drive-by shooting. It was a somber scene he would witness again and again in the city.

“The sense of desperation and hopelessness and powerlessness is crippling,” he said.

The opportunity to tackle the issue directly for the diocese grew out of ongoing conversations he was having with Bishop Smith about gun violence and public health solutions. The bishop asked last year if Smith would work toward those solutions in a new role with the diocese, and Smith agreed to take it on.

“Preventing gun violence is a critical issue in the communities of Eastern Missouri, especially St. Louis City and County,” Bishop Smith said in a written statement to the Episcopal News Service. “I am glad that parishes in our diocese can find a focus for mission in this work, and Marc Smith, with his passion and experience, is well-suited to provide leadership for it.”

Much of the national attention has been focused on Chicago’s dramatic surge in homicides, which even prompted President Donald Trump to suggest he would send in federal authorities if the trend isn’t reversed.

But while Chicago may have outpaced the United States’ other largest cities, including New York, Los Angeles and Houston, smaller cities like St. Louis, Detroit and New Orleans have suffered from much higher rates of homicide per capita. St. Louis recorded nearly 60 homicides per 100,000 people last year.

The national murder rate, despite remaining under the elevated level seen in the 1990s, also has risen over the past two years, and the possible causes, from gang activity to policing policies, are hotly debated.

At the local level, gun violence prevention often emphasizes the practical. In St. Louis, for example, Smith said there is a group of black clergy known as “homicide ministers” who reach out to victims’ families, attend funerals and provide assistance as it is needed. The Episcopal diocese is developing a plan to partner with the ministers.

Smith also is looking for additional, simple ways for Episcopalians to get involved.

“So many people have expressed a desire to help, and yet most people are not inclined or well equipped to be homicide ministers,” he said.

He has asked each congregation to identify one parishioner to serve as a liaison to the diocese as it coordinates efforts. Each congregation can support Lock It for Love in its own way, such as by holding fundraisers for the money to buy the gun locks or by sending volunteers to help promote the campaign at health fairs.

Smith hopes this initial project will inspire Episcopalians in the St. Louis area to get active on the issue of gun violence and eventually help expand the diocese’s outreach in ways that will address some of the underlying causes.

“Regardless of the debate over gun safety and constraints on guns, young people are still going to kill young people,” he said. “And toward that end, I want our limited resources to try to minimize that from happening, to help families pick up the pieces and not get caught in a cycle of retaliation.”