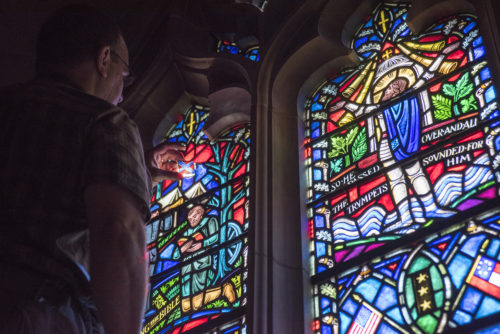 Stained glass fabricator Dieter Goldkuhle, who worked with his late father to install many of the stained glass windows at Washington National Cathedral, replaces an image of the Confederate battle flag after cathedral leaders decided in 2016 that the symbol of racial supremacy had no place inside the cathedral. The long-term fate of the windows honoring Robert E. Lee and Stonewall Jackson remains under debate. Photo: Danielle E. Thomas/Washington National Cathedral

[Episcopal News Service] When sunlight shines through the Washington National Cathedral’s stained glass windows, colors disperse. Hues take flight from the visual stories that normally confine them to a framed, defined space. Illuminated, the freed colors alight on cathedral walls as patches of blue, shades of pink and splotches of purple, transformed from visual narratives into an ephemeral pastel version of a Rorschach test.

The aftermath of a hate crime brought two particular stained glass windows at the cathedral into sharp relief. On the evening of June 17, 2015, Dylann Roof shot 12 people, killing nine of them, during a Bible study at Emmanuel African Methodist Episcopal Church in Charleston, South Carolina. The racially motivated violence prompted many institutions to take down Confederate flags. At Washington National Cathedral, then-Dean Gary Hall called for the removal of two windows – one commemorating Confederate General Robert E. Lee, the other memorializing Confederate General Thomas “Stonewall” Jackson. Both are inlaid with a small Confederate flag, offering a clear acknowledgment of the Civil War-era South for which the generals fought.

Roof “surrounded himself in these Confederate symbols,” said Rev. Kelly Brown Douglas, canon theologian at the cathedral and professor of religion at Goucher College. Acknowledging the modern-day violence associated with the symbols, the cathedral’s chapter (its governing body) formed a task force to recommend a way forward, rather than simply removing the windows. 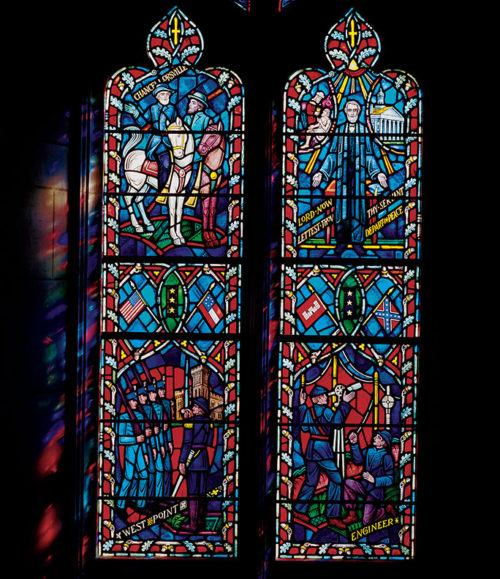 In a report last June, the task force proposed leaving the windows in place for the time being: “The windows provide a catalyst for honest discussions about race and the legacy of slavery and for addressing the uncomfortable and too-often avoided issues of race in America. Moreover, the windows serve as a profound witness to the cathedral’s own complex history in relationship to race.” The report further urged the chapter to resolve the matter by June 2018.

Report in hand, the chapter decided that while the windows should stay, the inlaid Confederate flags could not, and swiftly replaced them with clear two clear glass panels, one blue and one red.  “The [Confederate] battle flag is a problematic, racist image that has no place in the cathedral,” said Washington National Cathedral Chief Communications Officer Kevin Eckstrom. Brown Douglas, who sat on the task force, agrees. “Whatever the Confederate flag meant historically, it has come to symbolize white supremacy,” a stance in conflict with “Christian values,” she said. Flags aside, Lee and Jackson “fought for the Confederacy, and in so doing, they were fighting to uphold the institution of slavery,” Brown Douglas added.

Cathedral leaders haven’t always believed that the Confederate legacy clashes with Episcopal principles. The cathedral accepted an offer from the United Daughters of the Confederacy (UDC) to fund a memorial of Robert E. Lee, an Episcopalian, in 1931. UDC’s top goal is “to honor the memory of those who served and those who fell in the service of the Confederate states.” Twenty-two years would pass before the project came to fruition in the form of the stained glass windows. Cathedral archives included in the task force report show a friendly, supportive repartee between cathedral and UDC representatives. On paper, at least, no one seems to have questioned including the Confederate battle flag. 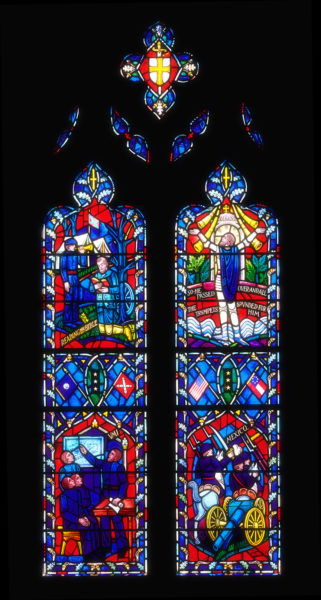 “It’s taken us a while to get here,” said Heidi Kim, the Episcopal Church’s staff officer for racial reconciliation. While Washington National Cathedral’s foundation was laid in 1907, decades after the abolition of slavery, Kim pointed out that slaves built many Episcopal churches. Many Episcopalians owned slaves and others, northerners among them, profited by trading slaves, a story told in personal terms in the documentary, “Traces of the Trade.”

“The degree to which almost anyone in the nation who had any economic privilege benefited from slavery, in the North and the South” was considerable, said Rev. Dr. Robert W. Prichard, a professor of church history at Virginia Theological Seminary and author of “A History of the Episcopal Church.”

In 2008 the Episcopal Church apologized for its role in slavery. The apology followed a resolution passed at the General Convention in 2006 urging the church “…to address systemic racial disparities and injustice in the church and the wider culture” deepened that sensibility. Opinion on what this means and how far it should go varies among Episcopalians.

Many think the windows should stay at the cathedral as a reminder of the Episcopal Church’s past. “There’s something about taking away those windows that seems a bit of a denial of where we’ve been,” said Danielle A. Gaherty, a member and lay leader at Trinity Lime Rock in Lakeville, Connecticut.

“I don’t think they should leave the building, especially at this time when there’s so much controversy in the world over race relations,” she said. “It just seems that it’s more important now than ever to remember.”

Retired parish priest William Thomas Martin of Williamsburg, Virginia, agreed. “By getting rid of the windows we [would] throw away the memory, and if we throw away the memory, we’re going to repeat [our mistakes]. The Confederate flag is a symbol of our original sin, I think. It reminds us of our own fallibility and our need for God’s grace.”

Doug Desper, an Episcopalian in Waynesboro, Virginia, thinks the Lee-Jackson windows should leave Washington National Cathedral. Like Gaherty, Martin and Riley Temple, he felt compelled to comment on a Religious News Service article about the windows posted on the ENS website in October. “I don’t think that battle flags of any sort belong” in a house of worship, he says. More importantly, he doesn’t like “the criminal South versus the virtuous North” feeling he gets from the discussion. That trope, he contends, ignores the complexities of mid-19th century American life. He advocates a reconciliation window to replace the Lee-Jackson windows, but “I don’t think we need to keep apologizing. I think what we need to do now is to look at how far we’ve come from where our ancestors were.”

As for a continued “we’re sorry” mantra, Brown Douglas agreed that’s not the answer. “Apologies are cheap grace,” she said. “The church should be talking about repentance. You have to name the sin, then turn around and go in a different direction.”

The point that Lee and Jackson were as complex as any men, the nuances of their life stories larger than stained glass windows, Rev. Delman Coates, senior pastor at Mt. Ennon Baptist Church in Clinton, Maryland, said that acknowledgment isn’t enough to put him at ease about the windows, even if their context is explained. “For me as an African-American, those are symbols of a very painful, horrific past,” said Coates, who participated in the cathedral’s panel discussion “What the White Church Must Do” last July. So much so, he says, that leaving the Lee-Jackson windows as-is would “make it difficult” for him to feel fully welcome at the cathedral.

Former cathedral task force member Riley Temple wants the cathedral to beef up its efforts around the windows now. He thinks the events to date have been intellectual to a fault; that they fail to address the array of emotions at play. He wants the cathedral to address this imbalance. “No one’s thinking about our level of discomfort and the continued injury and assault of the windows,” he said. “They don’t want to make white people uncomfortable. The truth is going to make us squirm, and we can’t get to reconciliation without squirming.”

But Brown Douglas cited another essential step in this process: “Before we can talk about reconciliation, we have to talk about justice.” To that end, she said the cathedral is creating programs and forming partnerships, including one with Coates’ congregation. During Lent, Brown Douglas will run a study program on social and racial justice. And on March 29, she will participate in the cathedral’s panel “Saints and Sinners: Robert E. Lee and Stonewall Jackson.”

Mobilizing a social justice and reconciliation movement within the broader Christian church makes sense to Coates. “Racism and structural racism in America were justified theologically,” he said. “In order to make progress on a range of social justice issues, we must reclaim and reimagine our own theology.” Willie James Jennings, associate professor of systematic theology and Africana studies at Yale Divinity School, author of “The Christian Imagination: Theology and the Origins of Race,” agreed. “Racism has a deep Christian architecture to it, and there’s no way to reckon with that past without coming through Christianity,” he said.

The theological and ethical journey of reckoning for Episcopal churches and others with very few African-Americans must include an honest look within. “It does come down to a denomination having a sense of its own whiteness,” he says. “They don’t understand how their Christianity and their whiteness feed each other. [As Christians] it is always important for us to show people what it means to be living in the truth.”

The strong emotions unleashed when people talk about race warrant attention – they’re important. Jennings pointed to “deep frustration about how people just refuse to honor the horror of all this.” If there’s good news on this challenging path, it’s that “the church has a vital role in helping people come to terms with what they feel, not just what they think,” he said.

Right now, feelings about the windows seem inextricably linked to a pervasive concern not about this country’s past, but about its current interpersonal and political climate.  “We’re as divided a nation as we’ve ever been. We’re as divided racially as we’ve ever been,” Brown Douglas said. By calling its Lee-Jackson windows into question, the cathedral stepped squarely into that sensitive, uneasy space.

Whatever the outcome, Coates and Jennings credit cathedral leaders and community members for calling the question on their role in memorializing and glorifying a painful past with omnipresent fingerprints. “I want to acknowledge the courage it takes to see what others refuse to see,” Jennings said. “I’m thankful that they’re doing that. It’s really important.”

In its report, the task force recommended digging into the topic as a community with forums, an “audit” of the stories the cathedral close buildings tell and with art of all kinds. Brown Douglas hopes the process will answer the questions: “What are we suggesting about who we are? But more than that, what are we saying about who God is?” She also hopes it will uncover “the voices that have gone unheard, the subjugated history.” How to incorporate those voices into the National Cathedral and just how the Lee-Jackson windows will fit into a now-evolving narrative remains to be seen.