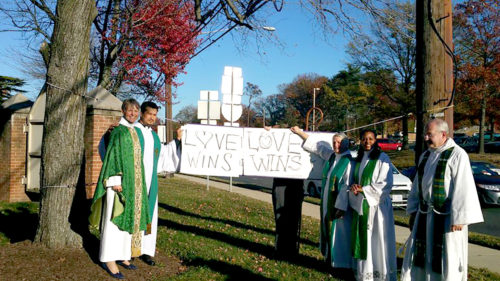 Washington Bishop Mariann Budde, left, and the Rev. Francisco Valle, assistant priest and leader of the Spanish-language Mass at Church of Our Saviour in Silver Spring, Maryland, hold a sign that reads “Love Wins” following an incident of racist vandalism at the church on Nov. 13. The Rev. Robert Harvey, the church’s rector is at the far right. Photo: Facebook

[Episcopal News Service] The four hate-filled words were gone almost as quickly as they were discovered, scrawled across a sign and a wall at Church of Our Saviour in Silver Spring, Maryland, on the first Sunday after November’s presidential election.

The Rev. Robert Harvey said the church waited long enough that day for authorities to take pictures of the graffiti before removing any trace of the message – “Trump Nation Whites Only” – and responding with messages of love and welcome.

The church has not been targeted by any additional acts of vandalism, Harvey said, and surveillance cameras are being installed to improve security. But the sense of unease has only grown in this congregation since Donald Trump’s inauguration as president. About 85 percent of the church’s members are immigrants, many of them from West Africa and Latin America, and they have been particularly alarmed by two developments: Trump’s executive order restricting entry to the United States from seven Muslim-majority nations and reports of federal immigration raids in some U.S. cities.

“Right now, many of my members are afraid,” Harvey said. “Many of the people here realize how urgent this issue has become about their immigration status.”

That urgency has led to action. In response to the vandalism in November and the Trump administration’s moves on immigration this year, Our Saviour has joined with other churches in the area, as well as synagogues and mosques, to develop an interfaith alliance seeking solidarity against religious and racial hatred. Harvey, meanwhile, is developing contacts with both lawmakers and immigration attorneys to directly assist parish members in documenting their legal status.

And, Our Saviour is one of several churches in the Diocese of Washington considering becoming sanctuary churches that offer safe haven for immigrants facing deportation.

“It’s a very sobering time. People are organizing in a variety of ways,” Washington Bishop Mariann Budde said, adding that there is “strength in that solidarity.”

“The Episcopal Church is part of a larger movement here, and that’s a good thing,” she said.

The Episcopal Diocese of Washington extends into the Maryland suburbs around the District of Columbia and includes Silver Spring,

home to more than 70,000 people just north of the capital city. Our Saviour includes members from more than 50 countries, Harvey said, from Sierra Leone to El Salvador. The multicultural congregation has grown over the past decade even as white membership has declined, he said.

About 380 people now attend one of the parish’s three Sunday services, with significant growth at the Spanish-language service on Sunday afternoons.

Budde made a point to attend the afternoon service on Nov. 13, hours after Harvey called to notify her that someone had vandalized the red-brick wall in the church’s memorial garden and a sign advertising its weekly Spanish-language mass.

In a show of support, attendance at that Sunday’s afternoon service nearly tripled from the typical 100, and Budde spoke out against hate speech in comments to reporters after the service.

“I would call especially upon the president-elect and those who voted for him to separate themselves from acts of violence and hate that are being perpetrated in his name,” Budde said during the service.

That imperative resonated with Harvey. “I stand by that still,” he said this week, but he does not think Trump or his supporters have done enough to reject hate-filled rhetoric.

“Absolutely not,” he said. “Not even close.”

At a freewheeling and often combative news conference Feb. 16, Trump responded briefly to a reporter’s question seeking comment on racist comments made in his name, turning the focus instead to what his opponents have been saying.

Budde said this week that Trump’s recent comments and executive actions on immigration are concerning.

“That does nothing to calm people’s fears or to assuage any doubt about the priorities of the administration,” she said. “I think it’s pretty obvious that in terms of the anxiety and uncertainty that immigrants feel in this county, it’s gotten worse since the president has taken office.”

Such uncertainty has prompted immigrants who attend Our Saviour to take precautions to ensure their residency status is secure, making sure their documentation is in order, Harvey said. Some are here with work permits, others green cards. Some may be married to American citizens but have not yet finished the citizenship process themselves. Others came to the country legally but may be at risk of deportation because of expired paperwork.

In making contacts with immigration lawyers, he hopes some will provide pro bono assistance to parishioners, and he invited the immigrant support organization CASA de Maryland to speak at next month’s vestry meeting.

The Our Saviour vestry, at its Feb. 15 meeting, discussed becoming a sanctuary church, as other Episcopal churches around the country have. Sanctuary churches vow to help protect immigrants from imminent deportation, such as by providing shelter, clothing, food and legal support.

Budde said two congregations in the diocese  have committed to becoming sanctuary churches, and four, including Our Saviour, are actively studying it. About a half dozen more have expressed interest in learning about the process.

Our Saviour’s vestry decided to wait another month before voting on whether to become a sanctuary church, but the issue of immigration and the Trump administration’s policies continue to motivate the church’s current outreach work toward immigrants.

“I was not aware of how critical this was going to be, but it certainly has changed the conversation quite a bit,” Harvey said.