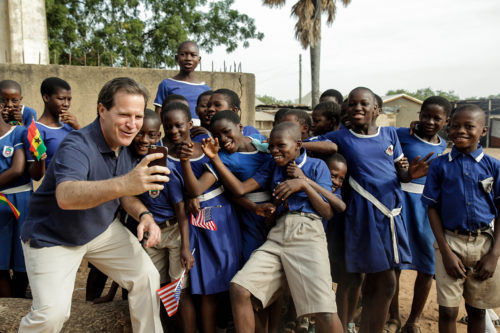 [Episcopal News Service – Accra, Ghana] It’s not uncommon to see women using donkeys to plow fields during the growing season in Ghana’s Upper East Region. Donkeys, it turns out, are easier to manage than bullocks, and when hitched to a plow, women can manage them on their own.

“As in any part of the world, there’s a very defined season for planting and growing, and giving women cows so that they could plant with the men wasn’t workable,” said Lindsay Coates, a development professional and an Episcopal Relief & Development board member. “Finding an alternative to bullocks, an animal that women could work, and then supporting them in their efforts is an example of development that is grounded in local experience and local assets.” 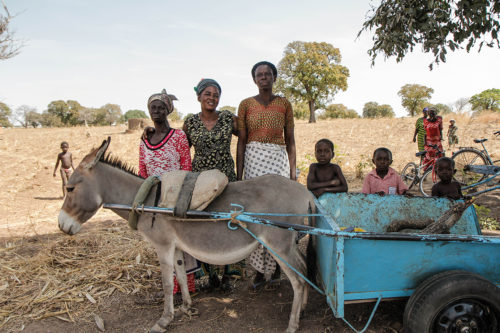 Women who participate in Episcopal Relief & Development’s donkey program in the Upper East Region, Ghana, receive a donkey, a plow and a cart. A donkey, which is smaller and easier to control than a bullock (male bovine), allows women farmers to plow fields themselves.  With money earned from selling what they grow, they can pay their children’s school fees and gain financial independence. Photo: Lynette Wilson/Episcopal News Service

The “donkey program,” as it’s called, was just one of the asset-based community development programs operated by the Anglican Diocesan Development and Relief Organization and supported by Episcopal Relief & Development that a group of pilgrims studying the trans-Atlantic slave trade and reconciliation visited last month in Ghana’s Upper East Region.

“Development and reconciliation work are about repairing relationships and restoring God’s Kingdom in the world,” he said. “It’s clear that throughout all of Africa many millions of people were kidnapped, and you ask yourself the counterfactual question of ‘what would Africa be like had the slave trade not happened?’ What would Africa’s present be like if that hadn’t happened in the 17th, 18th and 19th centuries?’

“The philosophy that we have in our development work is about repairing and ‘healing a hurting world.’ ” 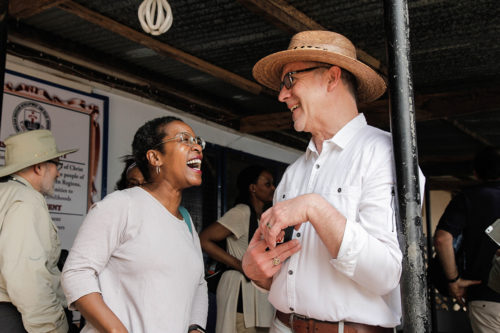 The Rev. Stephanie Spellers, the Episcopal Church’s canon to the presiding bishop for evangelism, reconciliation and creation, laughs with the Rev. Jeffrey L. Bower, the Diocese of Indianapolis’s chair to the Global Missions Commission, during a visit to the to the office of the Anglican Diocesan Development and Relief Organization, an Episcopal Relief & Development partner in Ghana. Photo: Lynette Wilson/Episcopal News Service

One of the pilgrims’ first stops in Ghana was to Episcopal Relief & Developments office in Ghana, from which staff officers have operated its NetsForLife malaria prevention program across. They later traveled north to Tamale, and then on to Bolgatanga, where the Diocese of Tamale’s Anglican Diocesan Development and Relief Organization is based.

“The groups that come are unique and add dimension to our ministry,” said the Rt. Rev. Jacob Ayeebo, bishop of the Anglican Diocese of Tamale, upon welcoming the pilgrims.

ADDRO, he explained, began in 1971 as a small project to support farmers. From there it moved to supporting communities; later the church recognized the need to consolidate its development work and incorporated as a nongovernmental organization in 1998 with an independent board of governors. ADDRO and Episcopal Relief & Development became partners in 2006. 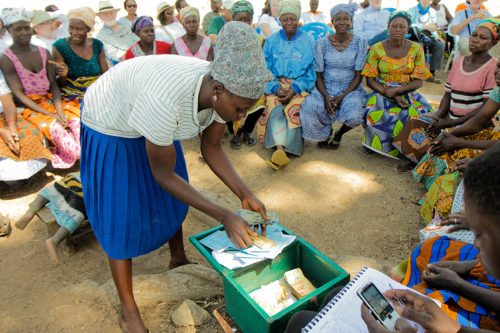 A member of a savings-with-education group counts money while the treasurer records the details during a presentation in Chuchuliga, Ghana. Photo: Lynette Wilson/Episcopal News Service

ADDRO operates an integrated health program in six regions, providing education on treatable illnesses, including malaria, diarrhea and acute respiratory diseases; in partnership with Ghana’s department of health, it distributes malaria nets treated with insecticide; and its staff works on gender issues, including advocating for widows’ rights, empowering women through a savings and loan program and the donkey program; and providing families with animals to raise for food and income.

In the case of the donkey program, through affordable credit and training, women acquire a donkey, plow and cart, along with improved seeds and fertilizer. Instead of using traditional hand tools in the field, women farmers learn how to properly care for their animals and apply new farming and business techniques to help increase productivity.

Because of this innovative program, women sell their produce at the local market. They also earn additional income by renting out the cart to carry supplies for others in the community. 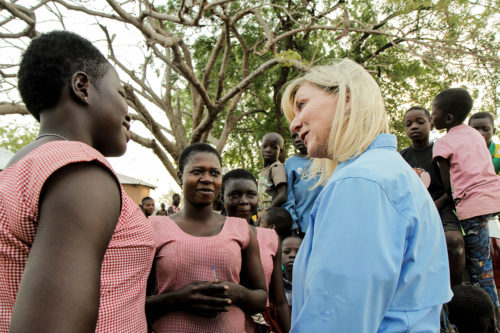 Like Coates, Sharon Hilpert, a former Episcopal Relief & Development board member, was impressed by the donkey program and Esther, one of the program’s participants.

“She [Ester] was just beaming as she stood alongside her donkey and she named it ‘God Be With Her’ because she believes that this donkey coming to her is part of God’s goodness,” said Hilpert.

Esther grows vegetables, rice, millet and corn for her family and to sell in the market.

“With the income she earns from her crops, she can pay her children’s school fees,” said Hilpert.

The success of the savings-and-loan, donkey and basket weaving programs all create conditions where people can become empowered.

“We don’t empower people; people seize empowerment,” said Radtke. “What we help them to do is to own their own agency, and that, I think, is one of the real markers of Episcopal Relief & Development, that it’s not us doing to, it’s us creating a context, providing information and technical support that unlocks the abundance that exists in these places.

“These are some of the poorest places in the world and yet we see savings circles where people are using their own resources and creating economic vibrancy with their own assets. We provide a framework and an approach and some guidelines and some training about that, but it’s growing by the local resources.” 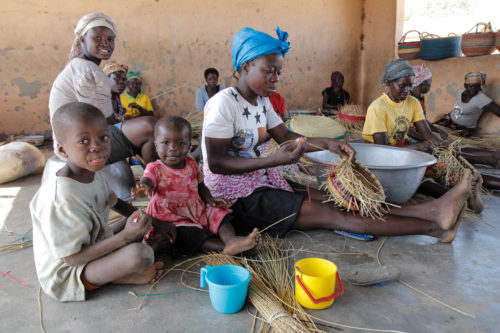 Coates said she thinks Episcopal Relief & Development is a leader for its focus on asset-based community development.

“Episcopal Relief & Development is very intentionally grounded in local structures. That has become fashionable in the last 10 years, but this has been the business model for a very long time. The partnerships with the Anglican Communion and the working through existing faith partners really creates that local ownership,” said Coates. “And it’s not building something new locally, it’s taking what exists locally and really supporting it in a respectful and sustained way. Episcopal Relief & Development is ahead of the curve in doing that work.”

– Lynette Wilson is an editor/report for Episcopal News Service.