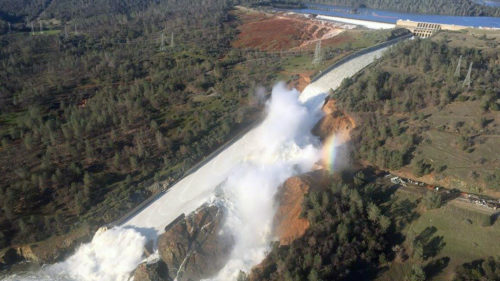 Fears that an emergency spillway would fail at the Oroville Dam in Northern California prompted authorities to evacuate the homes of more than 180,000 people down river. Photo: California Department of Water Resources, via Facebook.

The first tweet from the California Department of Water Resources came in at 4:24 p.m. and sketched the situation in the darkest of tones: “EMERGENCY EVACUATION: Auxiliary spillway at Oroville Dam predicted to fail within the next hour. Oroville residents evacuate northward.” The evacuation orders spread to several other townships and counties, snarling traffic on the highways as people fled.

Although officials backed off their most dire predictions later that night, many residents were still stuck in shelters, not sure when they could return home.

Episcopal Church members who didn’t have to heed evacuation notices rallied to be present for those fleeing a potential disaster, with waiting and anxiety being some of the worst aspects of the situation.

And for some, it wasn’t the first time they were fleeing from disaster.

The Rev. Richard Yale, rector of St. John the Evangelist in Chico, which was designated an official evacuation center, posted on Feb. 13 in the morning on his Facebook page: “Putting a crisis in perspective: one of our Iraqi guests mentioned that being evacuated because of the spillway at the dam doesn’t quite compare to having to flee Baghdad because terrorists threaten to kill your family.”

The Oroville Dam, which is the tallest in the United States, is one of the main features of California’s water system. It stores 3.5 million acre-feet of water, which is used for irrigation and drinking water from northern to southern California. Water crested over the emergency spillway on Feb. 11 for the first time since the dam was opened 48 years ago, according to the Sacramento Bee.

For a while, officials thought they had it under control. But then they found that the emergency spillway had eroded, raising concerns that it could fail and trigger an uncontrolled release of water. The dam is about two hours north of Sacramento, though officials said so far there was no “imminent threat” to California’s capital city.

On Tuesday afternoon, residents were allowed back to their homes after officials deemed the risks “have been significantly reduced.”

Yale said that though there had been some chaos, there also had been great ecumenical support. “There’s been real sharing and caring and openness,” he said.

St. John’s didn’t lack for food and necessities like baby formula, thanks to the local Presbyterian church, but there was a shortage of cots to accommodate the 40 people or so who slept at the church on Feb. 12.

One St. John’s parishioner, who had been homeless but found permanent housing with the church’s support, spent hours throughout the night locating cots for the evacuees, until Yale finally sent him home to rest.

“It’s those angel moments,” he said, that kept him going through a long night.

Northern California Bishop Barry Beisner, who had been in touch with clergy and lay leaders in the affected region throughout the evacuation, wrote to his diocese asking for prayers: “As I write this Monday morning, at least one of the towns evacuated last night has had the order lifted, and some of the nearly 200,000 displaced last night will soon be home.

“But major disruption is still an issue in many lives right now, and uncertainty still looms, as assessing/repairing damage to the dam continues,” Beisner wrote.

The Rev. Gary Brown, deacon at Emmanuel Episcopal Church in Grass Valley, reached by phone, said that he was manning a coffee and tea station at the Nevada County Fairgrounds. About 500 people were at the center, Brown said.

“It’s hard,” Brown said. “There’s a lot of sad faces and apprehension. … They didn’t have time to get the things they would like to have taken.

“It’s the little things,” Brown said, recalling one man who left so fast he didn’t have time to retrieve a leash for his dog. So a parishioner from Emmanuel fetched rope from his car for an improvised leash.

The Rev. Terri Hobart, rector of St. Luke’s Episcopal Church in Woodland said she had checked in with the Red Cross shelter at the Yolo County Fairgrounds and they were set with everything they needed, for the time being.

“People at the fairgrounds are tired, they’re shocked,” she said. “If they slept, they slept on cots in a huge room. Everybody is just waiting to see what’s going to happen.”

The disaster coordinator for the diocese, Margaret Dunning, said that now was not the time when people should send in food and other things because the Salvation Army was there to provide food and basic necessities.

“We need to hang on, pray and wait to see what goes on,” Dunning said.

By Feb. 13, water releases from the dam had lowered the level of the lake and the erosion appeared to be contained.

There’s still concern, not only about the erosion, but also about another storm system that’s due to move into the area later in the week.

Hobart said she was hopeful that the evacuees would get to go home soon.

“And if not, we’ll figure out what they need and get it to him,” she said.

-Paula Schaap is the Diocese of Northern California’s communications director.