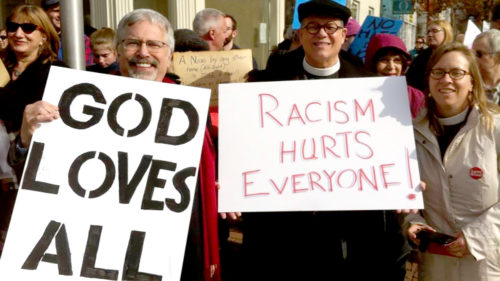 [Episcopal News Service] An Episcopal church in Virginia is speaking out against white supremacy after a key figure in what is known as the “alt-right” movement took up residence mere blocks from the church in the historic Old Town Alexandria neighborhood.

Members of Christ Church Alexandria joined other local churches last month in a peaceful protest outside the apartment where Richard Spencer is reported to have set up shop, and another protest is planned for later this month.

“We, the Vestry and clergy of Christ Church Alexandria, hereby reaffirm our baptismal covenant to respect the dignity of every human being,” the statement reads. “In alignment with the Episcopal Church of the United States, the Episcopal Diocese of Virginia, and the community of the City of Alexandria, we reject white supremacy in all forms. White supremacy is a sin and is antithetical to the teachings and example of Jesus Christ. We will continue to strive through our ministries and our worship to love our neighbors as ourselves.”

The church’s statement doesn’t specify motivation or name Spencer, but the Rev. Noelle York-Simmons, the church’s rector, confirmed Spencer’s presence in their community was part of the context in which the statement was written.

“We decided we needed to voice what we believe theologically about who we are and who and how we welcome,” she said, adding that white supremacist views “don’t reflect what many of us believe to be American values.”

Spencer has been described by the New York Times as a “white nationalist leader who is a top figure in the alt-right movement, which has attracted white supremacists, racists and anti-immigrant elements.” His profile rose after the presidential election when he led attendees at a Washington conference in a chant of “Hail Trump!” drawing national headlines for its echoes of Nazi salutes.

He also generated headlines for getting punched in the face on Inauguration Day, a moment that was caught on video and then widely discussed and debated.

His move to Alexandria may have drawn less notice nationally, but it has been a hot topic locally. It appears to have been reported first by The Atlantic, which said on Jan. 12 that Spencer was interested in “setting up a headquarters in the Washington area.”

Spencer and cohort Jason Jorjani “imagine the space as a kind of office-salon hybrid for the alt-right, a private space where people in the movement can make videos, throw parties (there’s an outdoor patio) and work on the nascent website.” The article also noted Spencer planned to live in the top level of the townhouse.

Reaction from Spencer’s new neighbors was swift and decidedly negative, according to AlexandriaNews.org. It reported the townhouse is about six blocks from City Hall on King Street, the main commercial strip in Old Town Alexandria.

In response to calls to city offices, Alexandria communications director Craig Fifer released a statement, saying, “There is no place for hate or intolerance in Alexandria. The mayor and City Council have consistently reaffirmed that diversity and inclusiveness are integral to our community.” He cited a November 2016 “statement on inclusiveness” issued by city leaders.

“The city has no authority to regulate residential or commercial property owners or tenants who follow the law while purchasing or leasing space,” Fifer told AlexandriaNews.org. “But while we uphold the First Amendment right to free speech, we will not permit harassment or hate crimes in our city.”

The Washington Post also reported on reaction in the neighborhood to Spencer’s move, in a Jan. 17 column headlined, “For one Alexandria neighborhood, the ‘alt-right’ is all wrong.”

“I think the first step is to bear witness,” Dennis Maloney, a consultant in Alexandria, told The Post. “Maybe it’s a simple matter of getting people to stand outside that building with signs saying: ‘We are not tolerating this. You are not welcomed.’ There is no reason why we can’t exercise our freedom of speech. That might invite them to engage.” 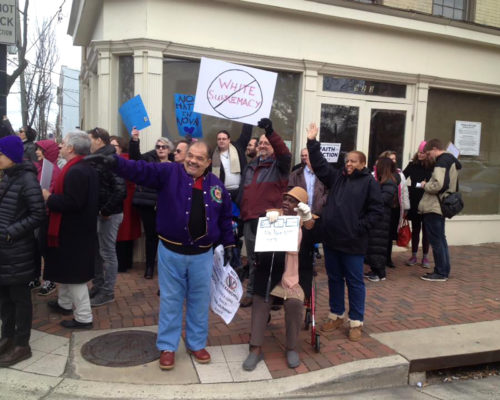 About 100 people were reported to have joined the protest Jan. 29 outside the building on King Street. Another protest is planned for Feb. 19.

Christ Church was one of several congregations to follow through with that plan, holding a peaceful protest outside the building on Jan. 29. David Hoover, one of the protest’s organizers and a member of Christ Church, held a sign saying, “God loves all.” His husband, Bill Roberts, held a sign that read “Racism hurts everyone!”

“When Episcopalians are baptized we promise to renounce the evil power of the earth,” Hoover told AlexandriaNews.org. “And white supremacy corrupts God’s creatures. So that’s why we’re here.”

Nearby merchants also have put signs in their windows with messages opposing intolerance, York-Simmons, Christ Church’s rector, said, and another protest has been scheduled for Feb. 19.

It serves as a reminder to the community, she said: “Our city just doesn’t have room for hate speech.”