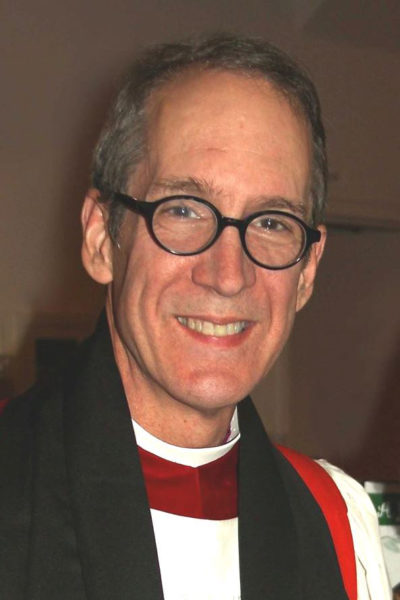 [Virginia Theological Seminary] The trustees of the Virginia Theological Seminary, at their Feb. 8 board meeting, unanimously approved the appointment of the Rt. Rev. James R. Mathes (’91) as the new associate dean of students. Mathes, who is currently the bishop of the Episcopal Diocese of San Diego, will join the VTS community this summer. He will be responsible for community formation and admissions, and will serve as the chief chaplain to students.

“Virginia Seminary is delighted that Bishop Mathes has accepted this call to serve,” said the Very Rev. Ian S. Markham, dean and president of VTS. “As an alumnus, he is coming home. We are looking forward to having Jim and Terri as a part of the seminary community.”

Before coming to VTS as a student, Mathes worked in educational development where he helped raise money for his high school alma mater, The Webb School, and directed a successful campaign for St. Andrew’s-Sewanee, an Episcopal school in Sewanee, Tennessee.

On March 22, 1992, he was ordained a priest at All Saints’ Episcopal Church, Belmont, Massachusetts.

His passion for education and personal growth transferred to a passion for parish life when he became rector of The Episcopal Church of St. James the Less in Northfield, Illinois. During his seven years there, church attendance doubled, school participation tripled, and the congregation founded a community outreach program for the elderly and disabled.

In 2001, Mathes was named canon to the ordinary for the Diocese of Chicago, where he directed the Department of Deployment and Congregational Development. He secured a grant from the Lilly Endowment to establish a clergy mentoring program. He also helped guide 130 congregations through a strategic planning process.

On Nov. 13, 2004, Mathes was elected to serve as the fourth bishop of San Diego and was consecrated in March of 2005. As bishop, Mathes was responsible for raising up future leaders of the Church, walking with them through their discernment process and seminary experience. Under his leadership, the diocese completed a successful capital campaign that established a diocesan school for ministry, created an outreach center serving San Diego’s homeless and working poor, and seeded a clergy mentorship fund. In 2007 he received an honorary doctorate from VTS. In 2014 he received the Mayor George Moscone Humanitarian Award for his support of the LGBTQ community.

Markham continued: “Bishop Mathes is a man of deep wisdom and sensitivity. Seminarians are looking forward to learning from his extensive experience of parish and diocesan service.”

Mathes and his wife, Terri, have two adult children.

Editor’s note: In a Feb. 13 letter posted on the diocesan website, Mathes wrote about his pending departure.