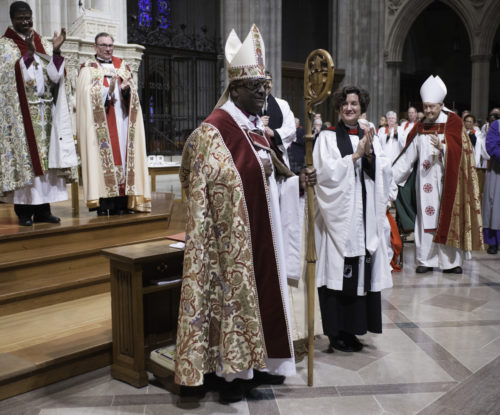 The Rev. Harold Lewis, rector emeritus of Calvary Church, Pittsburgh, Pennsylvania, and Wright’s longtime mentor, punctuated the service’s pomp and precision with strong words during his sermon from the Canterbury Pulpit of Washington National Cathedral. Lewis told Wright he was “about enter a ministry whose challenges may well be unique among those of your sister and brother bishops.”

“You will be at times finding yourself in one modern-day Babylon or another, singing the Lord’s song in a strange land,” Lewis said. “You will be a living paradox: Having been a commissioned officer who does not bear arms, you are now a lover of peace who ministers to those who prepare for and engage in war.” 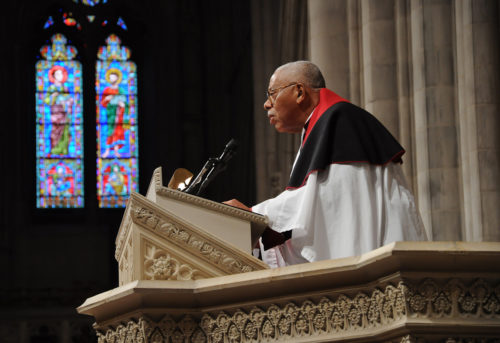 “You will be a living paradox, having been a commissioned officer who does not bear arms, you are now a lover of peace who ministers to those who prepare for and engage in war,” the Rev. Harold Lewis tells Carl Wright in his sermon for the latter’s ordination and consecration bishop suffragan for the armed forces and federal ministries Feb. 11 at Washington National Cathedral. Photo: Mary Frances Schjonberg/Episcopal News Service

Lewis reminded Wright that he and the chaplains under his care minister to “warriors, inmates and veterans” and their families. Many of them suffer from post-traumatic stress as well as from moral injury, a condition “born out of experiences which include the harmful aftermath of exposure to war as well as experiences which deeply transgress long-held moral beliefs and expectations.”

Moreover, he said, he reminded Wright that he must minister to a microcosm of American society with much higher rate of suicide that the rest of the population.

He urged Wright, who wiped his eyes as he sat in the first pew, to “help those to whom you minister to articulate and live out their faith in the one who is called the Prince of Peace.”

Lewis then turned to what would soon happen during the consecration or what he called “arguably the most dramatic act in the church’s liturgical repertoire.” The “gaggle of bishops clad in their voluminous rochets with those impossibly puffy sleeves” would soon surround him and obscure him from view “so that it will not be entirely obvious to the congregation just what they are up to.”

“My prayer for you today is that as you go about this new ministry, you will never, never give the faithful any reason to believe that those bishops were about the business of removing your spine,” he said.

Lewis added that he had faith that Wright would “eschew the effete advice long given to bishops that, to be effective in that office, all you have to do is show up and dress up.” 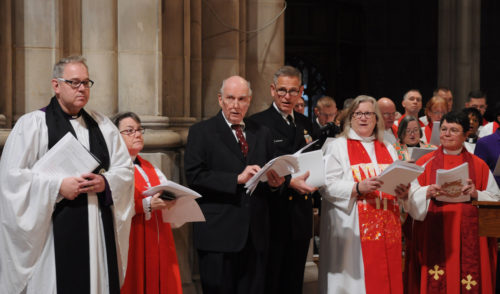 Instead, he told Wright, that “in a society with a plethora of religions and theologies and spiritualities from which to choose, fewer and fewer of which bare any resemblance to the faith once delivered to the saints, and in a nation whose leaders more and more exhibit the kind of arrogant, uncharitable and self-serving behavior that plagued the Corinthians and caused Paul to chastise them for thinking of themselves more highly than they ought to think, you will do well, solider of the cross that you are, to stand up, stand up for Jesus.”

Presiding Bishop Michael Curry was the chief consecrator for Wright’s ordination and consecration. The three previous bishops suffragan – James “Jay” Magness, George Packard and Charles Keyser – joined him as consecrating bishops, as did the current bishop of Maryland, Eugene Sutton; the 11th bishop of Maryland, A. Theodore Eastman; and the Rev. Richard Graham, bishop of the Metropolitan Washington, D.C. Synod of the Evangelical Lutheran Church in America.

A number of other Episcopal Church bishops participated in the laying on of hands. Chaplains and active and retired military officers had roles in the service.

Wright was the rector of St. Andrew’s Episcopal Church in Pasadena, Maryland, in the Diocese of Maryland, when the House of Bishops elected him on Sept. 20. In his military career, he has served as deputy command chaplain for the Air Force Global Strike Command at Barksdale Air Force Base in Louisiana. Commissioned an Air Force chaplain in August 1993, Wright is an associate member of the Anglican religious Order of the Holy Cross. More biographical information about Wright is here. 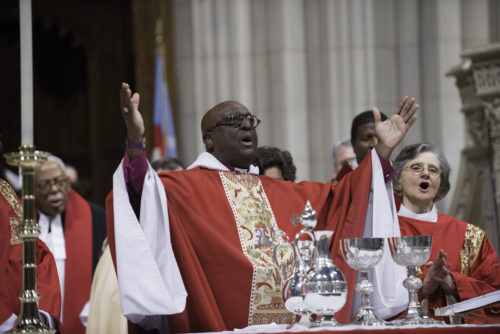 The bishop suffragan oversees Episcopal chaplains in the federal departments of Defense and Veterans Affairs, and the federal Bureau of Prisons. The bishop, who reports to the presiding bishop, gives the federally required endorsement of people to be military chaplains. Read about the bishop’s duties here.

Wright’s ordination and consecration at Washington National Cathedral came a day after he and others joined Curry to begin a 24-hour peace vigil held at the cathedral and elsewhere.

The Eucharist in the Great Choir that began the vigil was a gathering to pray “for the peace of the world, for peace among nations and peoples,” Curry said in his sermon. It was also, he added, a way to give thanks for the ministry of Magness, Wright’s immediate predecessor, and to pray for the incoming seventh bishop suffragan’s new ministry. 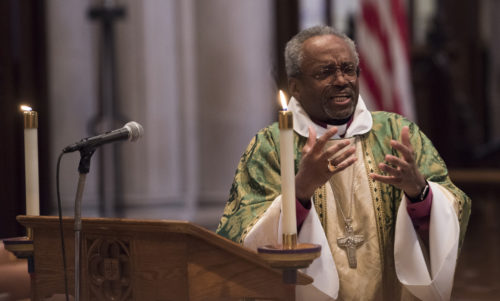 The Eucharist and subsequent vigil in the cathedral’s War Memorial Chapel was a joint effort of the Episcopal Peace Fellowship and the Episcopal Church’s Office of Federal Ministries. The vigil was the fourth of its kind. The first took place in 1990 when Keyser asked EPF to join him in sponsoring a vigil of prayer for peace for 24 hours before his consecration. Volunteers signed up hour by hour to pray for peace, either at the chapel or at some other location around the Church.

The Gospel for the service was Matthew’s version of the ending of the Sermon on the Mount in which Jesus tells his listeners to love their enemies and pray for those who persecute them. 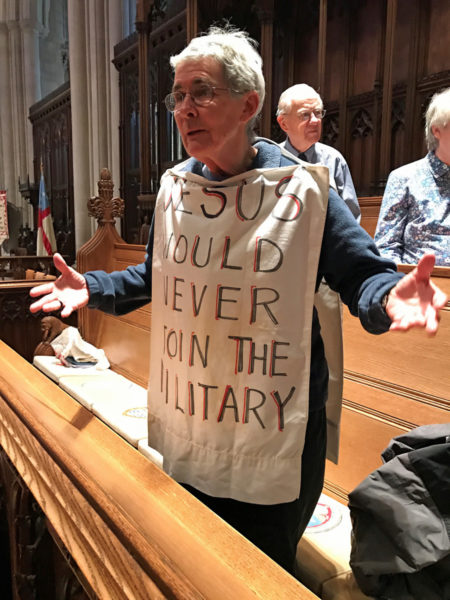 Kathy Boylan of the Catholic Workers House in Washington, D.C., came to the vigil Eucharist with two pillowcases draped over her torso to protest the militarization of the armed forces chaplaincy and the amount of tax money that supports war. The sign on her back read “U.S TAXES = War Police Brutality Torture Drones Don’t Pay.” She later gave some literature to Presiding Bishop Michael Curry Photo: Mary Frances Schjonberg/Episcopal News Service

Jesus synthesizes all of his teaching in the Sermon on the Mount, Curry said, and part of the lesson is that “blessed are the people who dare to work and labor unceasingly night and day for the peace of the world.”

Curry recalled prophecy in Isaiah 2:1-4 of swords being beaten into plowshares and spears being turned into pruning hooks. The presiding bishop said Isaiah’s vision beheld “the possibility of a new world where the intelligence and the technology that could be used to destroy now become the intelligence and the technology that is used to help God create the new heaven and the new Earth.”

Pointing to a child asleep on his mother’s lap, Curry said he was describing a peace that will ensure that the child will grow up in a peaceful world in which every man, woman and child “are treated under law and in every relationship as an equal child of God.”