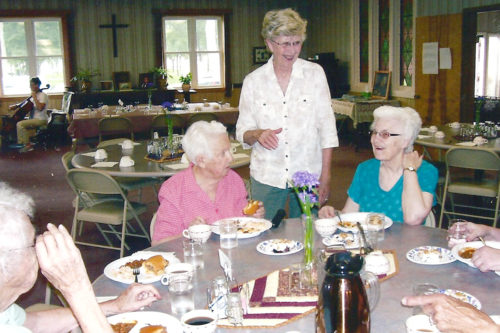 [Episcopal News Service] As an outpost of the Episcopal Church in a small Midwestern community, Trinity Episcopal would easily be overlooked if not for an unlikely success story that is told once a month through food and fellowship.

Even the most active members of this parish in Litchfield, Minnesota, population 6,726, openly describe the congregation as “pretty small,” “fairly small” and “little.” The church, on its profile page on the Episcopal Church’s website, calls itself as “a small but lively parish.”

Trinity Episcopal Church’s building in Litchfield, Minnesota, was built in 1871.

Its roots date back to 1871, with the construction of the church building that still is used for worship every Sunday morning. In recent years, the congregation’s membership has shifted older while diminishing in size to about 100. Attendance has dwindled even further, typically about 15 members at services that are led by a rotating lineup of supply priests who travel more than an hour west to Litchfield from the Twin Cities.

But visit Trinity Episcopal at lunchtime on the last Friday of any month, and you’ll find the congregation seeming to swell to several times its size, as members of the community pour in for the parish’s monthly free lunch and fellowship time.

“Everybody’s very proud of what we do and very thankful that we’re able to do it,” senior warden Dennis Rutledge said, estimating that the free lunches draw more than 100 people to the church each month. “We’re a fairly small congregation, but this is the best way for us to be effective and do the things we can do.”

The free lunch is the most prominent example of the outreach underway at Trinity, which has money from gifts set aside to support other social ministries, said the Rev. Judy Hoover, one of the supply priests who travel to Litchfield.

“Everyone at that parish has a job, and they work really well together. They’re really kind of unique,” said Hoover, 83, who lives in Plymouth, Minnesota.

Once in a while, Rutledge said, he’ll raise the question of whether the church should keep organizing the monthly free lunches. No one, apparently, takes the question seriously, perhaps including Rutledge himself.

The mastermind of each month’s meal is a man named Paul Foley, whose wife, JoAnn, is active in the Episcopal Church Women group. He was raised Roman Catholic but no longer considers himself a churchgoer. About 15 years ago, the church needed a cook to keep the lunches going.

“‘Nobody’s willing to take charge,’” Paul remembers his wife telling him. “I said, ‘I will.’”

Foley has been cooking since he was a boy growing up in Litchfield. He first learned how to prepare food by shadowing his mother in their kitchen. As an adult, he said he spent some time living in Chicago with friends who, when they discovered his skills at preparing a meal, told him they’d buy the groceries if he cooked. 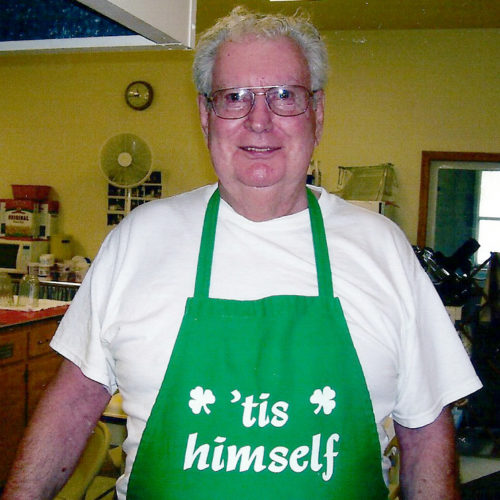 Paul Foley is the meal planner and cook behind most of the free lunches held each month at Trinity Episcopal Church in Litchfield, Minnesota. Photo: Jane Settergren

Foley, now 79, briefly worked later in life as a cook for a hotel and then for a caterer, but mostly he cooks for fun, family and fellowship. The free lunches at Trinity provide the perfect canvas for this culinary artist.

“It’s kind of a release,” he said. “I enjoy it so much and then the fact that we’re doing it for these people, and I look out to the opening and I see them out there all happy and visiting. … It makes me feel good.”

A typical Friday meal starts on Tuesday, when Foley drive up to St. Cloud to buy the groceries and brings them back to the church kitchen. Wednesday is devoted to prep work, and by Thursday he tries to have as much of the meal done as he can. He finishes off Friday morning by preparing the items that need to be hot and fresh.

The congregation and community have come to expect certain menu items at certain times of the year: October’s meal follows a German Oktoberfest theme, Foley said, and November is chow mein, just because people seem to like it. Ham is a must for December.

“You get to visit with everybody,” free lunch regular Veronica Caswell told the local Independent Review for a feature story about Trinity’s lunches in January. “Sometimes, you just don’t know what you’re going to cook, so it’s nice to come here,”

Hip surgery sidelined Foley in January, so he had to pass the apron that month to family members, but he plans to be back in the kitchen for February’s meal. His two Lenten meals are the same every year: “a tuna recipe everybody loves” and salmon loaf.

“If I didn’t make salmon loaf, they’d just come after me,” he said.

The menu isn’t the only diversity at the lunches. The meals draw a mix of people from the congregation and the community, including two group homes in the area whose residents suffer from developmental disabilities, church member Jane Settergren said.

“Those folks just enjoy it so much,” Settergren said. “We like to see them.”

And members of the congregation have gotten used to taking on certain roles every month, she said. One of the men is in charge of brewing the coffee. JoAnn Foley makes sure the bathroom supplies are stocked.

“I’m kind of the assistant washer,” Rutledge, the warden, said.

Settergren, 71, and others are stationed in the dining room to welcome diners. And one of the women, if she can break from serving the food, will play her cello while the crowd socializes.

“We haven’t really made a profit for the last couple years, but that doesn’t worry anybody because that’s not the object,” Paul Foley said. “It’s to get them together and have a good meal.”

And they expect to keep serving up the monthly meals at this “super little church,” as Settergren calls it, as long as they are able.

“It’s fun. Everybody seems to enjoy it,” she said. “We would miss it terribly if we didn’t do it anymore.”

-David Paulsen is an editor/reporter for Episcopal News Service.