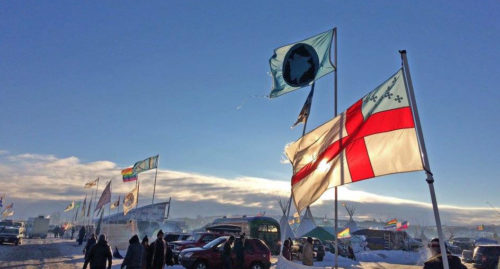 The Episcopal Church has been advocating with the Sioux Nation against the Dakota Access Pipeline since last summer. Local Episcopalians have also provided a ministry of presence in and around Cannon Ball, North Dakota, including in Oceti Sakowin Camp. The Episcopal flag flew constantly there until the recent effort to close down the camp because of the dangerous winter weather and the fear of disastrous flooding in the spring. Photo: John Floberg via Facebook

Council members said the church pledges to “continue to support the action and leadership of the Standing Rock Sioux Nation as the salt and light of the nation in its unwavering support of the sacredness of water, land, and other resources and reminding us all of the sacred calling to faithfulness.”

They praised the Episcopal Church and its ecumenical partners in the water protection actions led by the Standing Rock Sioux Nation. The Rev. John Floberg, council member and priest-in-charge of Episcopal congregations on the North Dakota side of Standing Rock, drew council’s specific praise, as did “the hundreds of Episcopal lay and clergy who responded to his call for support.”

Council also endorsed the Standing Rock Sioux Nation’s call for a March 10 march on Washington, D.C. The resolution said the march was “for the purpose of proclaiming the continuing concern for our sacred waters and lands as well as challenging our government to fulfill all relevant treaty obligations of the United States to all federally recognized tribes.” The tribe had previously started organizing the march, which Floberg had called on Episcopalians to join.

The Episcopal Church has advocated with the Sioux Nation about the Dakota Access Pipeline since summer 2016. Local Episcopalians have also provided a ministry of presence in and around Cannon Ball, North Dakota, the focal point for groups of water protectors that gathered near the proposed crossing. 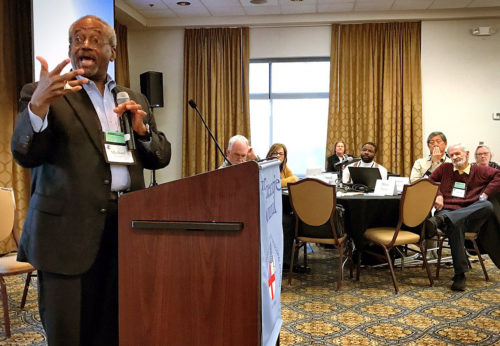 Presiding Bishop Michael Curry tells Executive Council Feb. 8 Episcopalians must engage in the public square but that they should root their engagement in the values of Jesus. “That’s how we avoid becoming labeled as just another interest group because not we’re not looking out for our own self-interest,” he said. Photo: Frank Logue via Twitter

Council’s action came about 24 hours after the U.S. Army said it would cancel the environmental impact study it promised to begin two months ago. Instead, it will allow construction on the final phase of the pipeline. The announcement was the latest is a series of administrative and legal maneuvers over the nearly complete pipeline.

The remaining work on the pipeline would push it under the Missouri River at Lake Oahe just north of the Standing Rock Reservation. The pipeline company set up a drill pad very near the proposed crossing point, which is upstream from the tribe’s reservation boundaries. The tribe has water, treaty fishing and hunting rights in the lake. Workers have drilled entry and exit holes for the crossing, and filled the pipeline with oil leading up to the lake in anticipation of finishing the project, according to the Associated Press.

The U.S. Army Corps of Engineers said last summer that the crossing would not have a significant impact on the environment. That determination prompted months of protest that began with a group of young people who live on the Standing Rock and Cheyenne River reservations.

On Dec. 4, then-Assistant Army Secretary for Civil Works Jo-Ellen Darcy reversed that determination and said the Corps would conduct a full-blown environmental impact statement. Such a study typically takes up to two years to complete. Energy Transfer Partners, the pipeline construction company, accused then-President Barack Obama’s administration of delaying the matter until he left office. The Corps formally launched the study on Jan. 18, two days before Obama left office.

Two weeks ago, in one of the first of an ongoing string of presidential actions, President Donald Trump, called for the rapid approval of the pipeline’s final phase, specifically telling the Corps to quickly reconsider conducting the environmental impact study. The Army’s Feb. 7 announcement fulfilled Trump’s requirement. 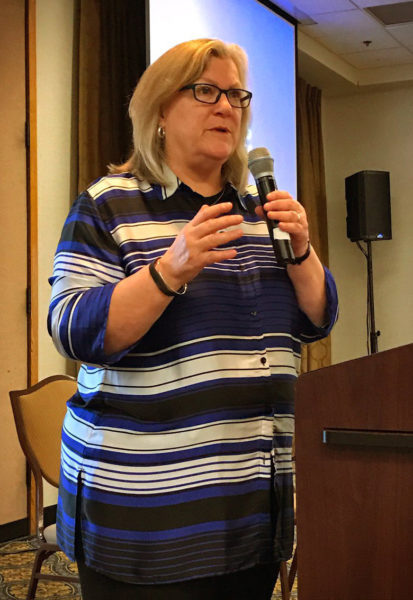 The Rev. Gay Clark Jennings, president of the House of Deputies, says during Executive Council Feb. 8 that President Donald Trump’s “willingness to pit groups of Americans against one another — to see society as a zero-sum game in which for one party to rise, another must fall” is dangerous because Christians who embrace that tactic “betray the essence of their faith.” Photo: Frank Logue via Twitter

Episcopal Public Policy Network issued an advocacy alert just after the Army’s announcement, calling on Episcopalians to contact Secretary of Defense James Mattis and urge him not to grant the final easement without a full impact study “that properly consults the Standing Rock Sioux and upholds treaty obligations.” The tribe contends that the Fort Laramie Treaties of 1851 and 1888 obligate the federal government to consider a tribe’s welfare when making decisions that affect the tribe.

After the announcement, Tribal Chairman Dave Archambault II said the Standing Rock Sioux Nation would challenge the Trump Administration’s move in court. “Our fight is no longer at the North Dakota site itself,” he said. “Our fight is with Congress and the Trump administration. Meet us in Washington on March 10.”

Jan Hasselman, lead attorney for the tribe, said the reversal “continues a historic pattern of broken promises to Indian tribes and unlawful violation of treaty rights. They will be held accountable in court.”

Trump said Feb. 7 that he has not gotten a single call protesting his directive to the Corps. That claim, Archambault replied reflected a distorted sense of reality. Archambault flew to Washington D.C., Feb. 7 to meet with Trump administration officials to discuss the tribe’s concerns about the pipeline. He learned of the Army’s announcement to Congress when he landed and canceled his meeting.

The 1,172-mile, 30-inch diameter pipeline is poised to carry up to 470,000 barrels of oil a day from the Bakken oil field in northwestern North Dakota – through South Dakota and Iowa – to Illinois where it will be shipped to refineries. The pipeline was to pass within one-half mile of the Standing Rock Reservation and Sioux tribal leaders repeatedly expressed concerns over the potential for an oil spill that would damage the reservation’s water supply, and the threat the pipeline posed to sacred sites and treaty rights. The company developing the pipeline, Texas-based Energy Transfer Partners, says it will be safe.

Additional ENS coverage of the meeting is here. Some council members tweeted from the meeting using #ExCoun.