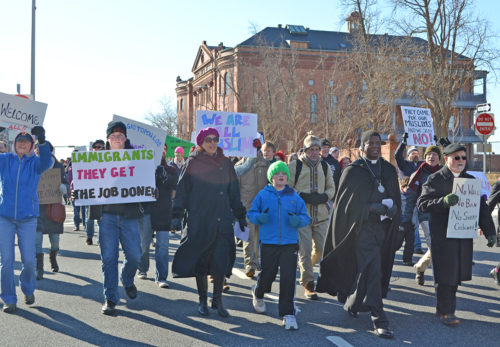 Bishop Eugene Taylor Sutton, second from right, leads a three-mile march for refugees from downtown Baltimore to the Cathedral of the Incarnation. More than 300 took part. Photo: J. Jason Hoffman/Diocese of Maryland

[Diocese of Maryland] For many of the more than 300 people who marched through downtown Baltimore on Feb. 4 to support refugees, the issues at play are not personal.

But for Amer Omar, 22, the issues are real and painful.

When he describes the day in 2009 when the police stormed into his family’s home in Sudan, he cries. They arrested his father and two brothers. They destroyed his home. They even killed his cat. Only Omar and his mother, Makka, escaped.

Their odyssey took them to Libya, then to Turkey, where they came under the protection of the United Nations High Commissioner for Refugees.  Omar, who now lives in East Baltimore, was in Turkey for three years before arriving in America in 2014. Complications kept his mother in Turkey.

“She is the last person I have now,” said Omar, who is Muslim. He has not seen his father or brothers since their arrest.  “I don’t want to say they’re alive. I say they are passed away. If they were alive, I would see them on Facebook.”

Omar told his story at the Cathedral of the Incarnation in Baltimore, the final stop of the three-mile march. The Rt. Rev. Eugene Taylor Sutton, bishop of the Episcopal Diocese of Maryland, described the march as a walking prayer and a chance for people to express their faith.

Anger over President Donald J. Trump’s executive order has sparked nationwide protests and judicial action by federal courts. The temporary ban on travel to and from seven mostly Muslim countries prompted the State Department to cancel visas for about 60,000 people and left hundreds stranded throughout the world.

Gerry Cohee, one of the marchers, said he protested against the ban last weekend at Baltimore-Washington Thurgood Marshall International Airport.

“As difficult as times are, I’m pleased to see that this is happening,” said Cohee. “I’m sad about the situation, but I’m putting myself out here as a gesture of hope.”

All along the route, people sang, “This little light of mine,” and chanted,  “No hate. No Fear. Refugees are welcome here.” Drivers in passing cars honked their horns in support. Merchants waved and shouted as the march passed their shops.

“A lot of these people are my customers and friends. How could I not support them,” said Kevin Brown, who owns the Station North Arts Café.

Medora and Chris Boyle’s two children, ages 3 and 1, were among the dozens of youngsters who joined the march. Some walked, some rode in strollers. Boyle carried her 1-year-old daughter in a holder strapped to her chest. She said she wanted to give her son a simple way to understand the turmoil swirling around him.

Fear and uncertainty is rife in the immigrant and refugee communities. Omar said two of his Sudanese friends have gone to Canada. The Rev. Wong Hong Lee, who serves a Korean congregation, said some of his parishioners are frustrated by what has happened and are thinking about leaving the United States. Lee, who came to America in 2005, said he is encouraging them to stay. The Rev. Margarita Santana, Hispanic Missioner for the diocese, said many of her parishioners were afraid to march.

“They told me: ‘No. I am in fear. I’m not coming,’” she said. “This is the time to say we stop the fear. America is a welcoming country.”

However, Sutton said he had received comments from many who do not support what they described as his political stance regarding refugees.