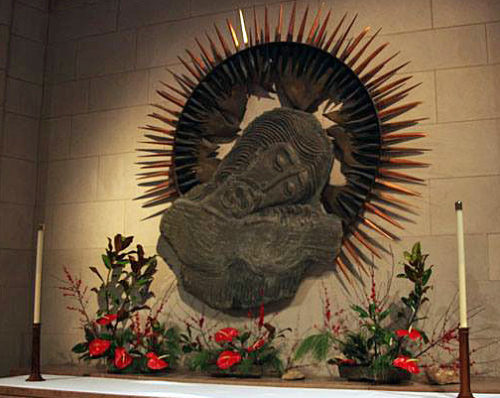 The Prayer Vigil of Peace and Reconciliation begins with a Feb. 10 noon Eucharist in Washington National Cathedral’s War Memorial Chapel. The chapel is centered on a sculpture, by British artist Steven Sykes, of the suffering Christ above the altar. It features a dramatically oversized head of Christ crowned with a halo of brass shapes simulating cannon shells and irregular rays of cast aluminum suggesting rays of glory. Photo: Episcopal Peace Fellowship via Facebook

[Episcopal News Service] As President Donald Trump and others in his administration rattle their Twitter swords and the world wonders about the possibility of new conflicts, Episcopalians are preparing to spend 24 hours for peace.

The Prayer Vigil of Peace and Reconciliation, which begins with a Feb. 10 noon Eucharist in Washington National Cathedral’s War Memorial Chapel, is a joint effort of the Episcopal Peace Fellowship and the Episcopal Church’s Office of Federal Ministries.

The vigil will progress for the 24 hours between the Eucharist, at which Presiding Bishop Michael Curry will preach and preside, and the beginning of the ordination and consecration of the Ven. Carl Wright as the Episcopal Church’s next bishop suffragan for armed services and federal ministries.

That service for Wright will take place at National Cathedral on Feb. 11, at 11 a.m. EST. It will be live streamed by the cathedral. The House of Bishops elected Wright on Sept. 20 to succeed Bishop Suffragan James “Jay” Magness, who has served since June 2010.

“The vigil has started taking on an important role in the consecration,” Magness told Episcopal News Service recently.

The first of the soon-to-be four vigils took place in 1990 when Bishop Suffragan-elect Charles Keyser asked EPF to join him in sponsoring a vigil of prayer for peace for 24 hours before his consecration. At the time, the United States was 10 months away from the start of the first Gulf War.

The new vigil tradition continued for the ordination and consecration of Keyser’s successor. Bishop Suffragan George Packard took up his ministry in February 2000 during a time of relative calm around the world but with al-Qaida stirring in the Middle East and 18 months before the 9/11 attacks in the United States. When Magness succeeded Packard  -– and held a peace vigil with EPF – the Iraq war was raging and U.S. troops were fighting in Afghanistan.

The partnership behind the vigil and the presence of EPF at the ordination and consecration, according to three participants, has evolved over decades. “In the early days, there was an adversarial relationship” between EPF and the office of the bishop suffragan, the Rev. Allison Liles, EPS executive director, told ENS. However, for this upcoming vigil, Liles worked with Wright to plan the liturgy.

EPF members previously protested during the ordination and consecration services at the point when the presider asks if anyone objects. Those EPF members then often walked out of the service. Keyser’s was the last during which they voiced objections, but EPF representatives have attended subsequent services and will be present on Feb. 11.

The relationship has grown into one dedicated to working for peace and acknowledging the price chaplains often pay for doing their work – agreeing to disagree at certain points and always praying for each other. Many Episcopal chaplains who report to the bishop are EPF members, according to Magness, who is also a longtime member. Liles said EPF worked with both Magness and his predecessor Packard, to advocate at General Convention for passage of such resolutions as one on conscientious objection to military service and an end to the Iraq War.

“We are really proud of our relationship with the office now,” Liles said, adding that an outpouring of people have pledged to pray during the vigil. “We’re praying for peace, not protesting anymore.” 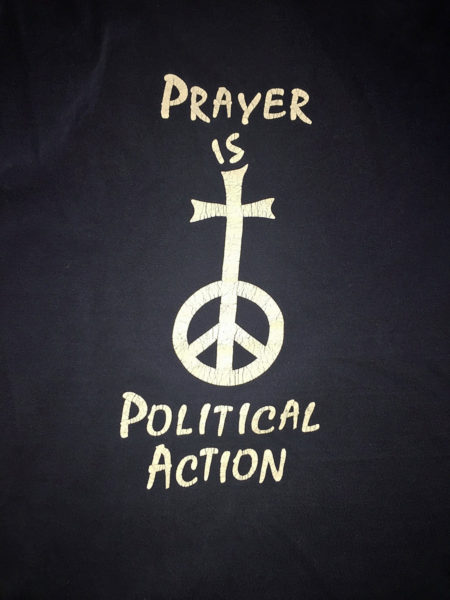 Students at Virginia Theological Seminary created this T-shirt about 15 years ago and the Rev. Allison Liles, Episcopal Peace Fellowship executive director, says its sentiment is still a core value of the fellowship. She often reassures older EPF members who no longer can march in the streets that prayer is vital to political change. Photo: Episcopal Peace Fellowship

Magness agreed. “It has been important for me to always be reminded of the fact that there are people in EPF who are praying constantly for peace; that we will find peaceable solutions to life’s greatest problems and the world’s greatest problems as opposed to military solutions,” Magness said. “And I and most of the chaplains couldn’t agree more. That last thing that we want is a cessation of peace and the commencement of armed hostilities. That doesn’t solve any of the world’s problems.”

Longtime EPF member and former EPF staffer Mary H. Miller told ENS that EPF is “modeling a different way of being.” That way of being is rooted in the shared understanding that the foundation of all of their work is peace.

“Where we have our commonality is our baptismal vows and our commitment to Christ and one another,” Magness said, adding that each person might approach an issue from a different direction, in part because of their individual life experiences.

Magness, a naval veteran who saw combat and has been a chaplain to people who have been “at the sharp end of the spear,” said he has seen how the violence of war traumatizes everyone involved. “I still remember the moment I realized what I was doing and what it was doing to my soul,” he said of his time in Vietnam.

Still, there are inherent tensions. The bishop suffragan oversees Episcopal chaplains in the federal departments of Defense and Veterans Affairs, and the federal Bureau of Prisons. The bishop, who reports to the presiding bishop, gives the federally required endorsement of people to be military chaplains. More at the bishop’s duties is here. 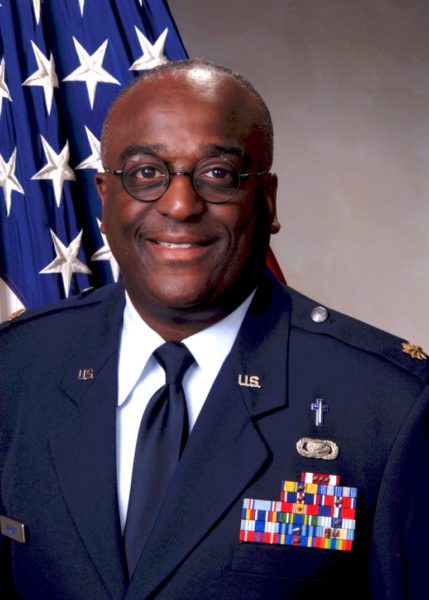 The Rev. Carl Wright will become the Episcopal Church’s next bishop suffragan for armed services and federal ministries during an ordination and consecration service at National Cathedral on Feb. 11, at noon EST.

The bishops suffragan have always been men with military experience. Wright served as deputy command chaplain for the Air Force Global Strike Command at Barksdale Air Force Base, Louisiana. Commissioned an Air Force chaplain in August 1993, he is an associate member of the Anglican religious Order of the Holy Cross. He was rector of St. Andrew’s Episcopal Church in Pasadena, Maryland, when he was elected. More biographical information about Wright is here.

Miller, who attends St. James Episcopal Church on Lafayette Square in Baltimore, Maryland, and who was on the EPF staff from 1989 to 2000, still opposes the office’s existence, especially with its relationship to the U.S. government and especially during wartime. “You have only one commander-in-chief and that one is God,” is what Miller said she will remind Wright. But Wright, once a fellow parishioner at St. James, knows that, she added.

Miller said there ought to be what she called a “de-militarized chaplaincy and a de-militarized bishop to shepherd those chaplains so that those pastors are not forced into trying to serve two masters.”

Magness said his office and EPF, which was founded as the Episcopal Pacifist Fellowship, also face the fundamental question of whether Christians ought to serve in the military when by implication they might have to kill someone. The question of what Jesus would have us do when encountering hostile people who mean to harm or kill us is ever-present. “I for one am glad that people who will continue to press for us to ask that question,” he said, adding that the church needs people who insist that the church and the world consider options to armed conflict and violence.

One result of asking that question was Magness and EPF members working together during the 2015 meeting of General Convention to pass Resolution A048 calling for a new study of Just War principles. Convention said the church ought to explore the “practical, military, and theological difficulties in applying Just War principles to the current problems of combating global and domestic terrorism, of responding to undeclared warfare, of responding to stateless combatants, of using evolving capabilities for cyberwarfare and robotics and of the use of social media in support of warfare and/or terrorism.”

Liles, Magness and Miller agreed that the effort of the bishop suffragan’s office and EPF at healing a contentious relationship and finding ways to work together could be a model that the world needs.

Join the vigil wherever you are

Episcopalians across the church can participate in the vigil by signing up for 30-minute vigil watch slots in Washington or from afar. EPF wants to have people in the War Memorial Chapel from 1 to 10 p.m. EST on Feb. 10 and from 8 to 11:30 a.m. EST on Feb. 11. The group also welcomes its chapters and its Peace Partner Parishes to host their own vigils from afar.

EPF is also creating a vigil book of prayers and litanies for people to use while keeping watch.  Contributors can submit prayers for the book by Feb. 3 to Liles at epf@epfnational.org. The book will be available in the chapel and posted on the EPF website for people to use elsewhere.