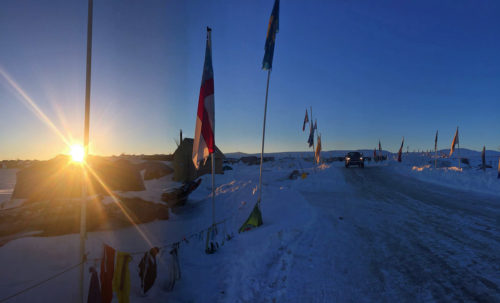 [Episcopal News Service] Episcopalians in and around the Standing Rock Sioux Nation Reservation are seeing their ministry change as the camps formed by water protectors along the Missouri River protesting the Dakota Access Pipeline are slowly closing.

The temperature in the area may have climbed to 40 degrees on Jan. 30 but it is still the bleak midwinter in North Dakota and March can be the state’s snowiest month, according to the National Weather Service. Tribal officials have said that the harshness of the winter is making the camps unsafe and they are worried about the protectors’ safety when spring melts the snow and the Missouri runs high.

The effort to close the camps began before Jan. 24 when Donald Trump called for the rapid approval of the pipeline’s final phase. The Cannon Ball tribal district Jan. 19 asked the protectors to leave and the entire tribal council supported that move the next day. However, tribal leaders also point to the president’s efforts in urging their supporters to redirect their advocacy.

“We understand and acknowledge the power of the camps in bringing us this far in our fight against the Dakota Access Pipeline,” the tribe said Jan. 26 on its Facebook page. “We maintain, however, that given current conditions, both physical and political, the focus must shift from maintaining camps to being at the political and legal forefront. The new regime will not respond to the camps with moderate actions; the tribe is not willing to place its citizens nor its battle against DAPL in jeopardy where so much that has been accomplished can be lost.”

The tribe’s statement acknowledged that many people want to return to the camps because of Trump’s Jan. 24 actions. “We stress, however, that further actions at the camp and at the bridge and drill pad are not where we will find success in this struggle moving forward,” the tribe said. “We need to be able to focus our energy on the intense government-to-government political situation and not the camps. Please do not return, but instead put your heart and effort into supporting the battle for clean water from your various homes around the globe.”

The bridge referred to in the statement is the closed Backwater Bridge on North Dakota Highway 1806. It has been both a focus of protests and a symbol of the disruption caused by the monthlong encampments. The remaining work on the pipeline would push the pipeline under Lake Oahe on the Missouri River just north of the Standing Rock Reservation. The pipeline company has set up a drill pad very near the proposed crossing point, which is upstream from the tribe’s reservation boundaries, and the tribe has water, treaty fishing and hunting rights in the lake.

The 1,172-mile, 30-inch diameter pipeline is poised to carry up to 470,000 barrels of oil a day from the Bakken oil field in northwestern North Dakota – through South Dakota and Iowa – to Illinois where it will be shipped to refineries. The pipeline was to pass within one-half mile of the Standing Rock Reservation and Sioux tribal leaders repeatedly expressed concerns over the potential for an oil spill that would damage the reservation’s water supply, and the threat the pipeline posed to sacred sites and treaty rights. The company developing the pipeline, Texas-based Energy Transfer Partners, says it will be safe. 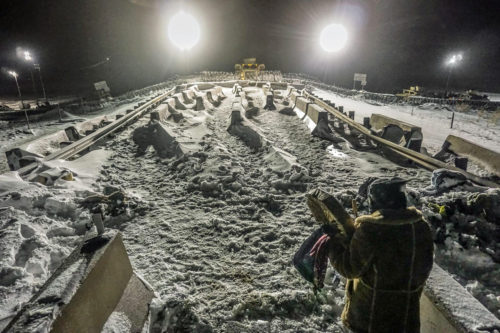 The closure of the Backwater Bridge on North Dakota Highway 1806 had become a point of contention between water protectors and local residents. Photo: Oceti Sakowin via Facebook

“The tribe is not expelling people,” the Rev. John Floberg, priest-in-charge of Episcopal Church congregations on the North Dakota side of Standing Rock, agreed.

However, he said in a Jan. 30 interview with Episcopal News Service, the tribe is telling people that the winter has been so harsh that remaining in the camps can be fatal in a land where wind chills have reached as low as -60 degrees. The tribe also wants debris in the camp removed. People took good care of the camps, Floberg said, but a Dec. 5 blizzard inundated the area, collapsing and burying tents and other flimsy structures – debris that the tribe wants to ensure that spring floods do not sweep into the river.

Many residents say they are tired of the Backwater Bridge being closed because it is their primary route to work and hospital services. The Cannon Ball community gym, used for sports, meetings and funerals, is in need of cleaning and repairs due to serving as an emergency shelter for protesters, some of whom continue to stay there, according to Floberg and the Bismarck Tribune newspaper.

There has been some division in the loosely led Oceti Sakowin camp about whether to stay or leave, Floberg said, adding that from what he can tell the majority agrees with the tribe and is working to shut down the camp. Some campers have moved off the bottomland near the river to the top of so-called Facebook Hill. Some water protectors in the Rosebud Camp asked Floberg for his help in shutting down their camp but the Sacred Stone Camp, which is on privately owned land, is still welcoming people, he said.

Oceti Sakowin organizers have said in an undated posting on the camp’s website that “the sacred fire of the Seven Councils has been put to sleep” but that the fire “can be lit in our hearts internally and spirituality forever.” The webpage asks occupants “to evacuate as soon as possible for safety reasons.”

While the tribe had originally set a Jan. 30 deadline, it now seems that protectors have until Feb. 19. Floberg said he understands that as of that day tribal leaders will no longer use its “political weight” to stand as a buffer between a camp on the north side of the Cannonball River and the U.S. Army Corps of Engineers, other federal officials and the state of North Dakota.

Floberg and local Episcopalians have been practicing a ministry of presence in the camps and in their local churches since the summer. They have funneled some donations to the Sioux Tribe to help cover the costs of dumpsters and portable toilets. An Episcopal area at Oceti Sakowin has been a gathering point for those efforts. Episcopal chaplains were there when the Dec. 5 storm hit. 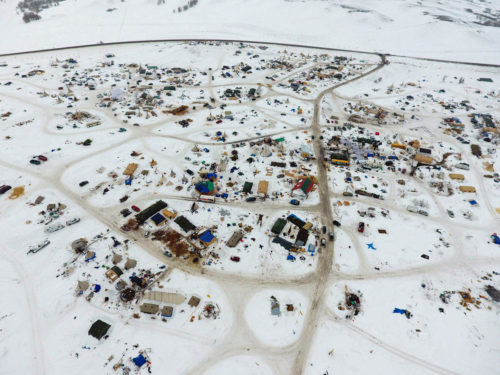 Oceti Sakowin camp spreads out along land near where the Missouri River near meets the Cannonball River. North Dakota Highway 1806 run across the top of the photo. Photo: Oceti Sakowin via Facebook

These days, the ministry is changing. Floberg and some members of St. James Episcopal Church in Cannon Ball, the closest town to the camps, recently discovered a military-style tent in Oceti Sakowin filled with what he estimated is 100,000 pounds of food. It is mostly flour, beans and macaroni, which Floberg said can be salvaged. However, they also found canned vegetables that most likely have frozen and may not be usable. The food cache grew over the months as people coming to the camps brought food donations, Floberg said. The salvageable food is being donated to people living on Standing Rock and on the nearby Cheyenne River Sioux Reservation.

“Our glamorous work of being protestors is now about moving flour bags,” Floberg said with a chuckle.

Episcopalians could see what sort of work was going to be needed at the camps and positioned themselves to do that work, he said. That planning included using some of the money donated to the Diocese of North Dakota to buy a skip steer loader, a small, engine-powered machine with lift arms that a person can drive and use to move heavy loads and perform other tasks. Donations also covered the cost of a large covered trailer for hauling the food away and storing it.

Local Episcopalians are grateful for those donations and “we’re still making use of them in the best ways that we know at any given a time and will continue to do that,” Floberg said.

The changes in their ministry has been guided by listening to what the tribal council is saying and what Chairman Dave Archambault II is saying, and then trying to figure out how Episcopalians can assist. “It’s when the tribe is engaged outside of itself that we step in to stand with Standing Rock and make clear our position of support for what they have decided to do,” he said.

“When it comes to internal decisions being made within the tribe, the Church doesn’t weigh in on whether the tribe should do this or that,” Floberg said. Episcopalians who are tribal members will weigh in on those issues and “we expect their good conscience to guide them.” 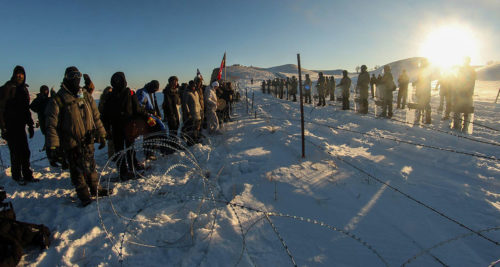 A line of water protectors face law enforcement officials at the drill pad set up for the final phase of the Dakota Access Pipeline. The Standing Rock Sioux have asked that such protests end and water protectors leave. Photo: Oceti Sakowin via Facebook

For instance, can people in the camps still come to St. James in Cannon Ball to fill their water cans if the church supports the tribe’s decision that the camps should close?

“Is that supporting the camp to remain open when the tribe has asked it to close or is it simply responding to basic human need? After all, we’ve heard it: Water is life,” Floberg explained.

“Right now, until Feb. 19, our position can be rather clear. If water is needed and we have that resource available, we’ll make it available to those who need water. … We believe we can be faithful to standing with Standing Rock while at the same time wanting the tribe to understand the Church always will respond to humanitarian need.”

When that Feb. 19 deadline comes around Floberg and others “will have to listen again” to what tribal leaders are saying to determine how to support that tribe from that point.

The Episcopal Church has been standing with the Standing Rock Sioux Nation’s position on the pipeline since summer 2016. Local Episcopalians have also provided a ministry of presence in and around Cannon Ball, North Dakota, which has been the focal point for the groups of water protectors that gathered near the proposed crossing. Presiding Bishop Michael Curry visited the area in September and many Episcopalians, both lay and ordained, answered Floberg’s call to stand in witness with the water protectors in November.

Previous ENS coverage of the Episcopal Church’s work with Standing Rock is here.

Floberg said he thinks the pipeline protests galvanized people for other actions. Some marched in the various Women’s Marches on Jan. 21 and he told Episcopal News Service Jan. 30 that he knows some water protectors who were among the people who went to the San Francisco airport Jan. 28 and 29 to protest Trump’s refugee ban.

“It awoke our Church to getting engaged and so a lot of our members have,” he said.