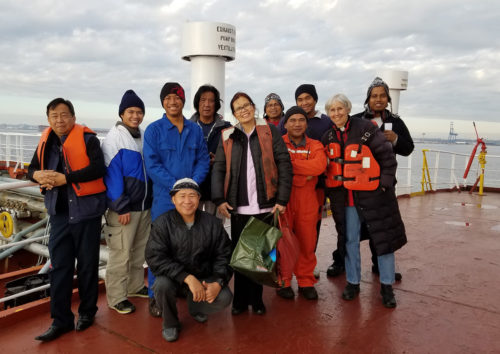 [Episcopal Diocese of Maryland] “If this had to happen to us, we’re glad it happened here.”

So said the crew of the cargo vessel M/T Newlead Granadino to the Rev. Mary Davisson, executive director and chaplain at the Baltimore International Seafarers’ Center (BISC). The crew was marooned on board by immigration restrictions, corporate snafus and seaworthiness regulations.

One of Davisson’s first calls last fall was to Mission to Seafarers Project Manager Ben Bailey. BISC is affiliated with Mission to Seafarers, an international entity with Anglican roots. Bailey was very helpful in explaining how MTS might be able to help BISC supply emergency provisions. The crew of 18 was then virtually out of food and water at their anchorage. Fortunately, Shipley was quickly able to address the provisions problem through the manning agency and an interim ship management company hired by a bank.

Meanwhile, offers of help poured in from the entire Baltimore community and beyond. BISC’s ecumenical team of volunteers shopped for everything from rosaries to toothpaste and thermal underwear. The vessel’s boiler had broken and there was some delay in getting safe space heaters on board.

Believe Wireless Broadband (BISC’s own internet provider) supplied free internet. The Roman Catholic Apostleship of the Sea donated a television and other items. Seafarers International Union stored and sorted numerous donations of warm clothing and food from the wider community. Brown worked closely with Shipley in addressing crew needs. McAllister Towing, the Maryland Pilots, and Vane Brothers facilitated delivery of supplies and visits to the anchorage. Davisson has visited the crew at least nine times at anchorage and the dock, offering prayers, delivering donations, and checking on crew welfare.

The crew finally got paid. Twelve of the original 18 have now been repatriated. One was the captain, who emailed Davisson, “A big thank you to the whole community of Baltimore”!