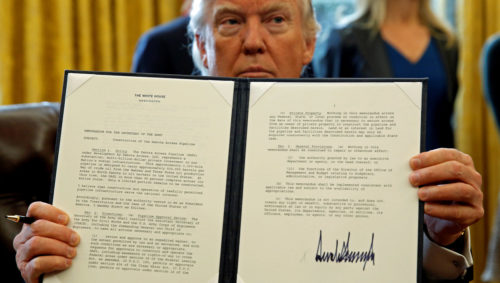 [Episcopal News Service] While reaction to President Donald Trump’s Jan. 24 actions designed to move forward both the Keystone XL and Dakota Access pipelines was swift, the immediate impact of his memoranda remained unclear.

Nothing in Trump’s memorandum on the Dakota Access Pipeline appears to force approval of the project but it calls on officals to speed up the U.S. Army Corps of Engineers’ ongoing environmental review process.

A presidential memorandum is somewhat different from a presidential executive order and some observers say it has a lesser impact.

Other observers wondered if Trump’s decision to sign the documents fit what they see as a pattern of Trump and his aides seeking to distract the media from other events happening as the administration gears up, including nomination hearings, ethics inquiries and changes to websites and policies that restrict communication with the public and prevent public input. Also published on Jan. 24 was a proclamation that Trump signed soon after becoming president Jan. 20, declaring that day to be a “National Day of Patriotic Devotion.”

In the Dakota Access Pipeline memo Trump tells the U.S. Army Corps of Engineers to “review and approve in an expedited manner, to the extent permitted by law and as warranted, and with such conditions as are necessary or appropriate” the company’s request to finish the pipeline. The remaining work would push the pipeline under Lake Oahe on the Missouri River just north of the Standing Rock Sioux Nation reservation. The proposed crossing is upstream from the tribe’s reservation boundaries, and the tribe has water, treaty fishing and hunting rights in the lake.

The Corps decided Dec. 4 to put that work on hold, cheering opponents, and conduct the environmental impact statement, including exploring alternative routes.

At the time, Presiding Bishop Michael Curry asked that “the assessment involve extensive consultation with affected populations, and that any plan going forward honor treaty obligations with the Standing Rock Sioux.”

The Episcopal Church has been advocating with the Sioux Nation about the pipeline since summer 2016. Local Episcopalians have also provided a ministry of presence in and around Cannon Ball, North Dakota, which has been the focal point for the groups of water protectors that gathered near the proposed crossing.

However, Trump’s order says the Army shall “consider, to the extent permitted by law and as warranted, whether to rescind or modify” its Dec. 4 decision, revert to the Corps July 2016 environmental assessment and grant the required easement for the lake crossing.

The Standing Rock Sioux Nation said that Trump’s actions Jan. 24 violate the law and tribal treaties. Saying it will take legal action against Trump’s efforts, the tribe added, “Nothing will deter us from our fight for clean water.”

The tribe urged its supporters “to fight and stand tall beside us,” and to contact their representatives in Congress to “let them know that the people do not stand behind today’s decision.”

The tribe’s statement noted that on Jan. 18 the Corps opened the public comment phase of its environmental impact analysis of the company’s request. Public comment is due by Feb. 17.

The Sioux Nation said last week that it welcomed the Corps’ work but said “it should include at the very least the territory of the entire Great Sioux Nation, and not just Lake Oahe and the northern boundary of the Standing Rock Sioux Tribe’s Reservation.”

“From now on we are going to start making pipelines in the United States,” Trump said from the Oval Office. “We will build our own pipelines with our own pipes, that’s what it has to do with, like we used to in the old days,” he said, adding that the directive will put “lots of steelworkers” back to work.

Trump did not comment on his directive about the Dakota Access Pipeline. Press Secretary Sean Spicer later told reporters that Trump “has shown through his business life that he knows how to negotiate a great deal where parties come out ahead.” Spicer said Trump is willing to sit down “with all of the individuals who are involved in the Dakota pipeline to make sure that it is a deal that benefits all of the parties of interest or at least gets something that they want.”

Texts of the pipeline-related actions taken by Trump Jan. 24 are here and here.

The 1,172-mile, 30-inch diameter pipeline is poised to carry up to 570,000 gallons of oil a day from the Bakken oil field in northwestern North Dakota – through South Dakota and Iowa – to Illinois where it will be shipped to refineries. The pipeline was to pass within one-half mile of the Standing Rock Reservation and Sioux tribal leaders repeatedly expressed concerns over the potential for an oil spill that would damage the reservation’s water supply, and the threat the pipeline posed to sacred sites and treaty rights. The company developing the pipeline, Texas-based Energy Transfer Partners, says it will be safe.

Thousands of people, including Native Americans and indigenous people representing about 300 tribes from around the world, traveled to North Dakota in summer and fall of 2016 in an unprecedented show of solidarity with the Standing Rock Sioux Nation.

The tribe recently told the people remaining in the protest camps to leave due to safety and environmental concerns over flooding as the massive snowpack in the area melts. The snowpack typically melts swiftly in the area, causing rapid flooding that could sweep people and material into the river. The tribal council was also concerned about continuing protests at the Backwater Bridge leading to and from the area. The tribe had requested an end to those protests but some people in the camps had ignored that request.