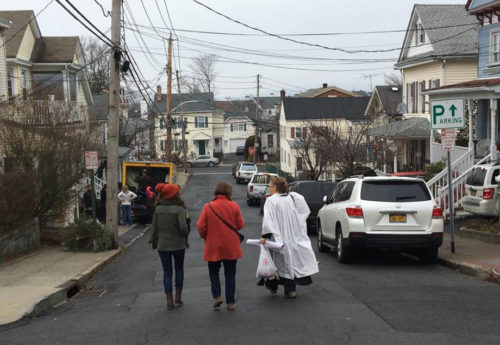 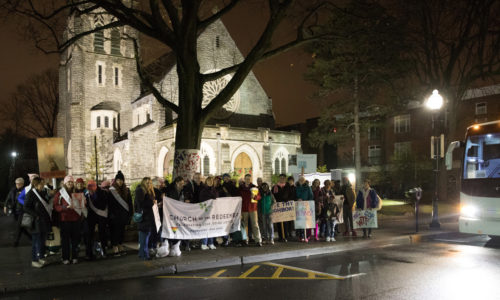 Members of Church of the Redeemer, Morristown, New Jersey, prepare to board a bus to Washington, D.C., for the Women’s March on Washington. Because of parking limitations in the District of Columbia, Redeemer sought out alternative parking options and St. Christopher’s Episcopal Church in New Carrollton, Maryland, welcomed them. The New Jersey Episcopalians rode the Metro from the New Carrollton stop in Washington, D.C. Photo: Cynthia Black 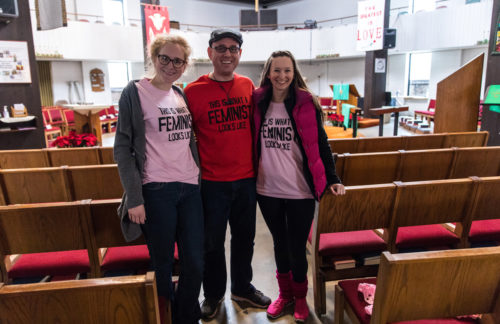 Krista Donough, Cindy Donough and Erik Donough (l-r) pause for a photo at St. Christopher’s Episcopal Church in New Carrollton, Maryland. Krista and Cindy are sisters, and Erik is married to Cindy. “The people of St. Christopher’s provided fabulous hospitality,” said the Rev. Cynthia Black, rector of the Church of the Redeemer, Morristown, New Jersey. “They welcomed us in the morning and had healthy snack bags for each of us to carry as we marched, as well as coffee and continental breakfast. Then they welcomed us ‘home’ again when it was over with more food. Initially, we were just hoping for somewhere to park the bus – but we were reminded once again what a true family the Episcopal Church is.” Photo: Cynthia Black 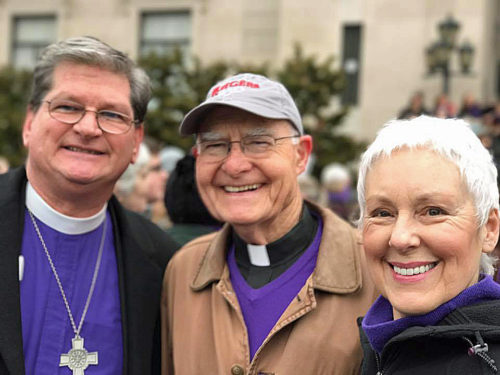 Diocese of New Jersey Bishop William “Chip” Stokes meets up with the Rev. Peter James Bridge and his wife Jane outside the Patriots Theater at the Trenton War Memorial building in Trenton, New Jersey. After listening to speakers, the marchers walked the half mile to the New Jersey State House, where they pledged their commitment to action. Photo: Williams Stokes via Facebook 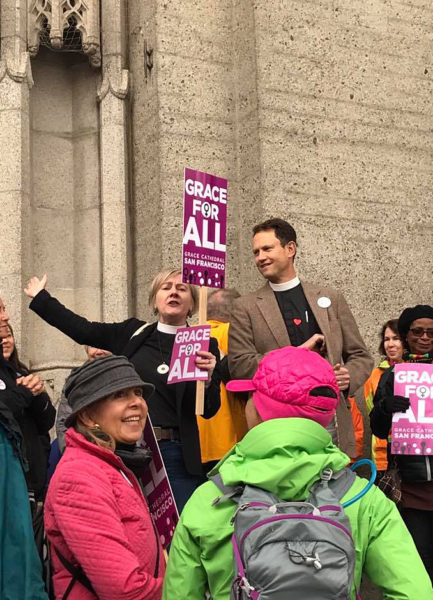 The Very Rev. Malcolm Clemens Young, dean of Grace Cathedral in San Francisco, and the Rev. Ellen Clark-King, cathedral executive pastor, welcome more than two hundred Episcopalians and other San Franciscans to the cathedral before they march to the city’s Civic Center. Clark-King read a prayer drafted for the march and California Bishop Marc Handley Andrus blessed the marchers. Photo: Grace Cathedral 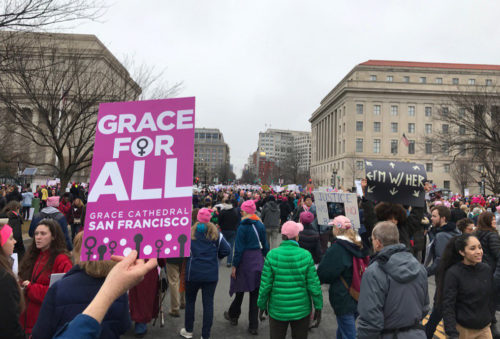 Grace Cathedral and Diocese of California participants display their “Grace for All” signs during the Women’s March on Washington. 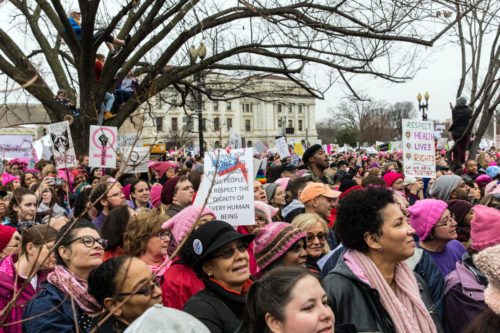 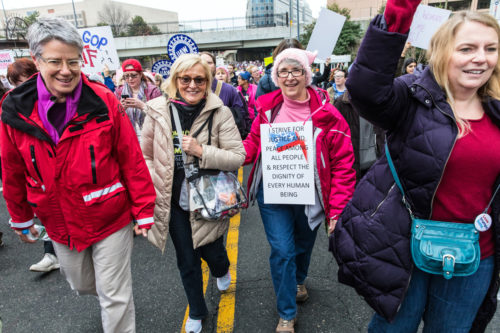 “For me it was about my granddaughter and all of the little girls that I want a better life for,” said Colleen Hintz, Church of the Redeemer member. “I went as a mother, a grandmother, a public health nurse and a woman of faith to say loud and clear that I respect the dignity of every human being.” From left, Rebecca Walker, Debbie Quinn, Colleen Hintz, all from Church of the Redeemer, Morristown; and Laura Russell, All Saints, Hoboken, New Jersey, march in Washington. Photo: Cynthia Black 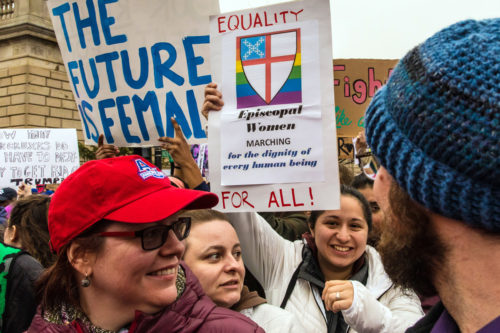 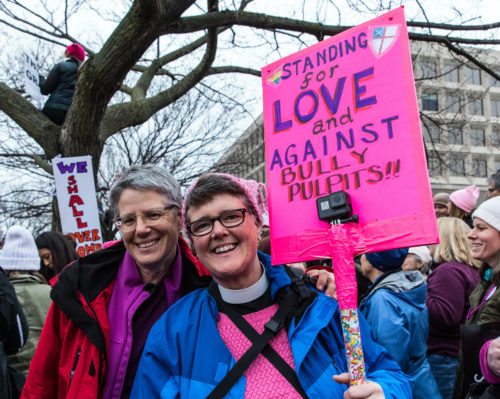 Rebecca Walker, left, and the Rev. Cynthia Black from Church of the Redeemer, Morristown, New Jersey, get ready to march. Redeemer chartered a bus that left Morristown at 4 a.m. Jann. 21 The bus parked at St. Christopher’s Episcopal Church in New Carrollton, Maryland, where they were welcomed and fed before continuing on the Metro to the march. Photo: Colleen Hintz 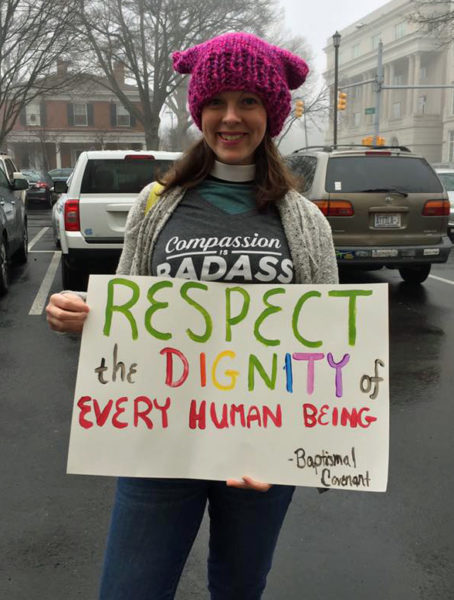 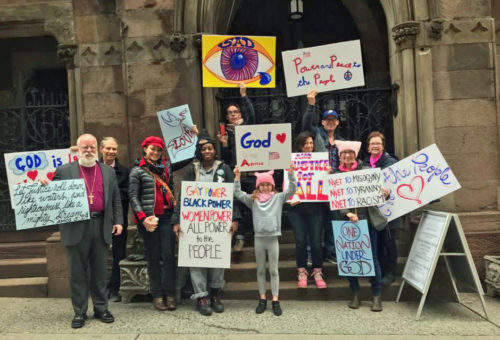 Diocese of New York Bishop Andrew Dietsche joins other Episcopalians outside of the New York Church of the Incarnation holding signs made for the Women’s March. Photo: K. Jeanne Person Facebook timeline 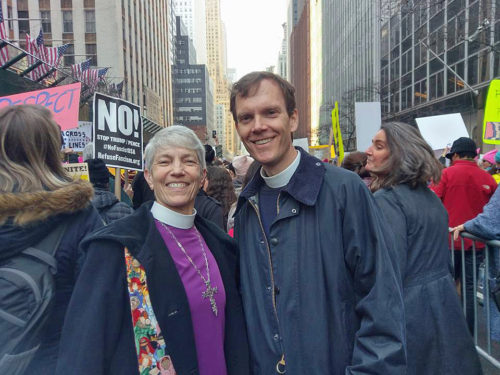