[The families of President Donald Trump and Vice President Mike Pence take their seats at the 1 hour 53 minute mark of this video, followed by Trump and his wife Melania. The service begins shortly thereafter.]

[Episcopal News Service] The morning after Donald Trump became the 45th president, Washington National Cathedral performed one of its traditional roles in U.S. life by offering the new president and the nation a chance to come together in prayer.

A representative of the presiding bishop, the bishop of Washington and the dean of the cathedral led 26 representatives of Christianity, Islam, Judaism, Sikhism, Baha’ism and Buddhism in the service. Many of the participants read, chanted and prayed in the language of their faith traditions and in English. Some 1,275 invited guests attended. The cathedral can seat 2,500.

Prior to the service, the cathedral noted on its website that the liturgy was an “interfaith service of prayer, music and Scripture readings, designed to reflect the diversity of our nation and to remind the president that he is called to lead all of us, not just a narrow few.”

The service went on while thousands of people flooded Washington for the Women’s March, including many Episcopalians. Companion marches occurred across the country and in other parts of the world. (Episcopal News Service plans coverage of the marches.)

Trump and his party were nearly 35 minutes late for the service, leaving the cathedral musicians to fill the time with music.

After Trump arrived, former Arizona State Senator Carlyle Begay, a Navajo who is a member of Trump’s inauguration committee, began the service chanting the Navajo Way Prayer and Blessing as he walked up the center aisle.

“As we mark this moment of political transition, let us all draw strength and courage from the sacred texts and songs and petitions, from the many traditions of our land, and may they inspire us always to seek divine assistance, care for another and live according to the highest aspirations to which God calls us as individuals and as a nation,” she said.

Bishop Suffragan for the Armed Forces and Federal Ministries James “Jay” Magness led the opening acclamation. Presiding Bishop Michael Curry asked Magness to represent him at the prayer service because the presiding bishop is leading a pilgrimage of reconciliation to Ghana, a commitment he made more than a year ago.

The Very Rev. Randolph “Randy” Hollerith, dean of the cathedral, then used the Book of Common Prayer’s “Prayer for the Human Family” (page 815) for the opening prayer.

The readings included 1 Kings 3:5–12 (read mostly in Hebrew), Romans 5:1-5 and Matthew 5:1-10 as well as the first seven verses of the Quran, known as the Surah Fatiha. The 1 Kings reading was introduced with a Jewish call to prayer; the two New Testament readings by a Christian call to prayer (a sung Kyrie Eleison) and the reading from the Quran followed a Muslim call to prayer. 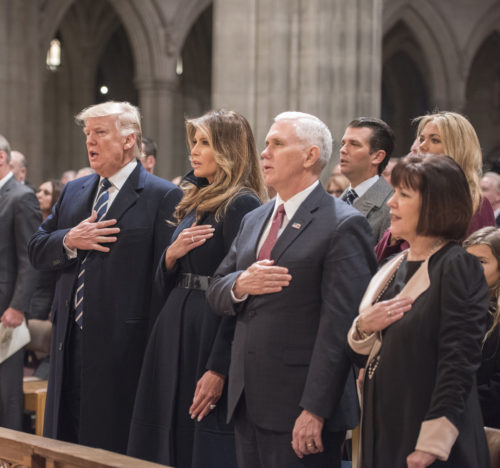 Prayers and music were interspersed among the readings. The prayers included for those who govern, for civil leaders, for those who serve others, for peace and for the country, as well as a form of the Prayers of the People. Many of the prayers had multiple biddings with responses echoing prayers for Morning and Evening Prayer, and the Prayers of the People in the Book of Common Prayer. 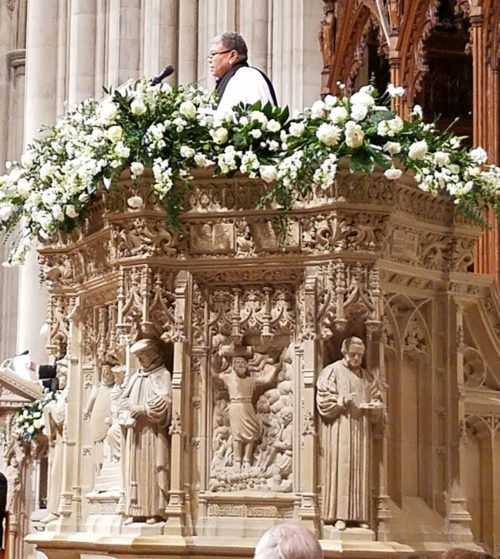 The Rev. Rosemarie Logan Duncan, cathedral canon for worship, chants the Kyrie Eleison as the Christian call to prayer from the cathedral’s pulpit. Photo: John B. Johnson IV via Facebook

In addition to the processional hymn, the congregation sang “Great is thy faithfulness,” as well as the national anthem, and joined the cathedral choir and U.S. Navy Band Chief Musician Antje A. Farmer in singing the final verse of “America the Beautiful.”

Blind Christian singer Marlana VanHoose, who had sung at the Republican National Convention, sang “How great thou art” and the United States Navy Sea Chanters sang “Let there be peace on earth.” The Liberty University Praise gospel choir from Jerry Falwell’s Liberty University sang “We’ve come this far by faith.” The gospel choir also sang during the choral prelude, as did the Sea Chanters and the choir from Holy Comforter-Saint Cyprian Roman Catholic Church on Capitol Hill.

Trump asked that there be no sermon, Budde told the Washington Post earlier this month. Budde said in a later blog post the choice of a preacher for the service and even whether to have a sermon traditionally belonged to the president. She acknowledged that some people felt agreeing to Trump’s request seemed “as if the church had surrendered its responsibility to preach truth to power.”

Budde had told the Post that the service was “not the occasion that we will use to address particular issues of policy or concerns we might have about the direction he’s taking the country.” 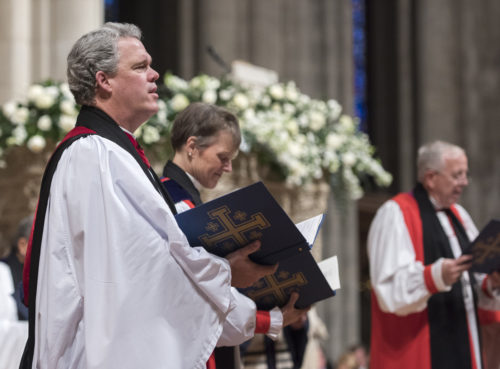 Budde blessed the congregation, telling them to “go forth into the world in peace.”

“Be of good courage. Hold fast to that which is good. Render to no one evil for evil. As far as it depends on you, live peaceably with all, but make no peace with oppression,” she said. “Strengthen the faint-hearted, support the weak, help the afflicted, honor all people, love and serve your God whose spirit working in you can do infinitely more than you can ask for or imagine. And may the blessing of God Almighty, our creator, sustainer and giver of life be with you and remain with you this day and forevermore. Amen.”

The Rev. Darrell Scott, senior pastor of New Spirit Revival Center, Cleveland Heights, Ohio, a Trump campaign supporter and prosperity gospel preacher, gave the dismissal. “Go forth from this place in peace. Be watchful, stand firm in your faith, be courageous and strong,” he told the congregation. “Let all that you do be done in love.”

As the altar party recessed, Trump shook hands with many participants, including Budde.

The order of service is here.

To participate or not

Not everyone invited to participate in the service accepted and some of those who did faced criticism.

Rabbi Ari Plost of Congregation B’nai Abraham in Hagerstown, Maryland, wrote in the Washington Post that he declined because it would appear “callous” after he had spent 2016 helping congregants and others who were “overwhelmed and in tears from the constant rhetoric of antagonism and derision” of the campaign.

He said he planned to pray with his congregation on the Sabbath that day. “Each of us, in our own way, should use the occasion of this inauguration to rededicate ourselves to compassion and cohesion in our communities, lifted up by our creed of religious inclusivity and liberty,” he wrote.

Mohamed Magid, a Sudanese-American imam known for his interfaith work and who leads a network of 11 mosques in Northern Virginia known as the All-Dulles Area Muslim Society, faced critics on social media for agreeing to issue the Muslim call to prayer during the service.

Calling Washington National Cathedral “a modern day icon of unity and peace-building for our nation,” Magid said in a Facebook post that it is also “an institution that welcomes diverse representations of faith as a statement of our nation’s belief in the freedom of religious expression. 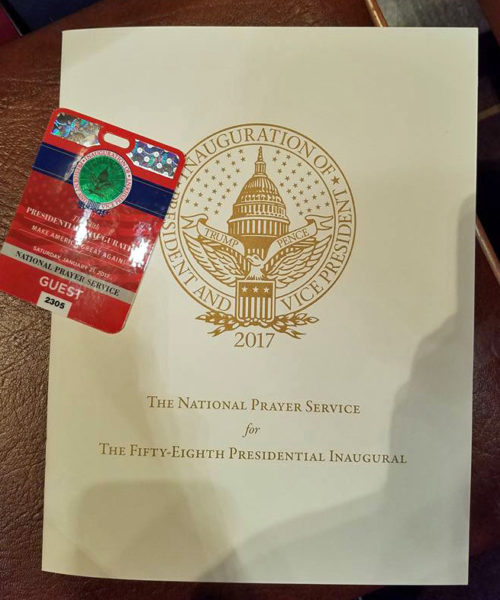 “As we enter a new chapter for our country, faith leaders must seek out opportunities to elevate our shared principles, champion freedom, and promote civil rights for all Americans,” he said. “In doing so, we will demonstrate to all who witness this service that our nation is strengthened by our diversity, enriched by our common humanity, and sustained by our belief in God Almighty.”

The prayer service is a tradition dating back to the inauguration of George Washington and is considered the conclusion of the official inaugural events. A congressional resolution that relied heavily on the English coronation ceremony largely shaped Washington’s first inauguration in 1789 in New York City, according to information on the cathedral’s website. The resolution required that, following the oath of office in front of Federal Hall on Wall Street, the Senate and House walk a short distance to St. Paul’s Chapel on Broadway to hear “divine service” by the chaplain of Congress, Episcopal Bishop Samuel Provoost. He acted in a role similar to that of the archbishop of Canterbury at English coronation services.

Beginning with President Franklin Delano Roosevelt’s first inauguration in 1933, presidential inaugural prayer services have taken place at the cathedral, which calls itself a “house of prayer for all people.” That tradition has been more recently consistent since President Ronald Reagan’s second inauguration in 1985. The exception was President Bill Clinton, who chose Metropolitan African Methodist Episcopal Church, the historic black church in downtown Washington, for both of his inaugural prayer services. Washington National Cathedral has also been the location of funeral and memorial services for nearly all the 21 U.S. presidents who have died since the cathedral’s founding.

Trump, his wife Melania and about 300 people attended a private church service at St. John’s Episcopal Church near Lafayette Square across from the White House the morning of the inauguration. The parish has traditionally offered that opportunity to incoming presidents.Trump’s was the 12th such service.

Robert Jeffress, senior pastor of First Baptist Church in Dallas, Texas, preached the sermon at Trump’s request. The controversial preacher has spoken derisively of Muslims, Mormons, Roman Catholics and LGBTQI people in the past.

The Rev. Luis León, rector of St. John’s, told CNN that he was involved in logistical planning of the event but not the choice of speakers.

Jeffress used the story of Nehemiah to show why God blesses leaders. The text of his sermon is here.

Seven religious leaders participated in the inauguration ceremony later that morning. The program for that event is here.

The chaplains of the U.S. House of Representatives and the Senate prayed during the luncheon that followed.