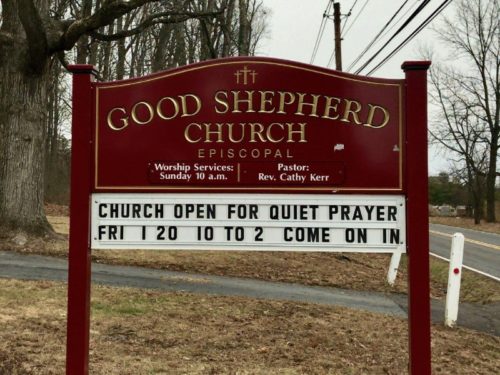 [Episcopal News Service] Episcopal congregations are planning to mark with prayer the events surrounding Donald Trump’s Jan. 20 inauguration as the 45th president of the United States.

“We welcome parishioners and community residents to drop in for any part of that time. There will be no service, just the opportunity to join with others to pray in the silence of God’s presence,” Good Shepherd said on its Facebook page. “We Episcopalians call ourselves people of common prayer, and that usually means worshiping together using the words of the Book of Common Prayer. But, shared silence can also be a form of common prayer, too. Please join us in lifting our hopes and fears to God in prayer, whether or not you can be with us at church.”

Among other events around the Episcopal Church are these:

“With the beginning of a new Congress and the inauguration of President-elect Donald Trump, our nation enters a new chapter in its history,” New Jersey Bishop Williams “Chip” Stokes wrote to the diocese, calling for a weekend of prayer to begin at noon on Jan. 21.

“Praying together, though in different locations, joins us as a diocese with the Episcopal Church and the wider community of faith as the 58th Presidential Inaugural Prayer Service at the National Cathedral finishes,” Stokes wrote. “Collectively we remind ourselves that God is ultimately in charge and we appeal to him for the best for our nation.”

A special Office of Noonday Prayer at Trinity Cathedral in Trenton is the formal start to the New Jersey effort. Stokes asked congregations to host similar services, and those unable to attend, he said, ought to pause at noon that day for a period of personal prayer. The bishop also urged congregations to “incorporate prayers for our nation in each of their liturgies during the weekend.”

The diocese has posted a toolkit for those prayers and liturgies here.

‘A Weekend of Prayer and Resistance’

All Saints Episcopal Church in Pasadena, California, plans to spend Jan. 20-22 working “with our interfaith allies and community partners to continue to be the change we want to see in our nation and our world,” according to an announcement on its website. Events include an “interfaith inauguration viewing” party Jan. 20, healing prayer all that day and a noon Eucharist (to be livestreamed here), and participation in the Jan. 21 Los Angeles Women’s March (one of many satellite marches planned around the country in conjunction with the main march in Washington, D.C.). The parish plans a forum on Jan. 22 titled “Intersectional Resistance: Part 1 – Reproductive Justice & LGBTQ Equality,” described as “a conversation focused on organizing to protect our rights, our safety, our health, and our families.” There will be additional liturgies at All Saints and participation in a Muslim prayer service and Shabbat services elsewhere.

The Cathedral of the Incarnation in Garden City, New York, on Long Island will be open for prayer from 9 a.m. to 4 p.m. on Inauguration Day. It will also offer its normal weekday Morning Prayer service at 8:45 a.m. and Eucharist at 12:15 p.m. The Very Rev. Michael Sniffen, cathedral dean, and the Rev. Michael F. Delany, canon pastor, plan to attend Ghostlight at Adelphi University in Garden City Jan. 19. Ghostlight is an inauguration eve vigil being held by the theater community at 728 theaters across the country. Sniffen and several parishioners are traveling with Trinity Wall Street to Washington, D.C., for the Women’s March.

Washington National Cathedral’s Center for Prayer and Pilgrimage is coordinating a Pray in Place Prayer Vigil from 6 a.m. Jan. 20 through midnight on Jan. 21.

“No matter where you are or what you are doing, take time to add your voice to the voice of others as we pray throughout the days surrounding the inauguration,” the announcement said.  The center will offer prayers for “wisdom for our leaders, justice for our communities and peace for our world” at the top of every hour via the center’s Facebook page. Those prayers will also be available to those who follow the center on Twitter here.

Trinity Episcopal Cathedral in Omaha, Nebraska, plans a morning vigil to coincide with the inauguration. Open to all faiths, the time will open with Morning Prayer and end with Eucharist at noon.

“This is an opportunity to quiet ourselves and to offer our hearts and minds a chance to rest from the tension and noise of this uniquely difficult time in our nation’s history,” the Very Rev. Craig Loya, dean of the cathedral, told the Omaha World-Herald.

‘The Inauguration of Hope’

Actor, writer and director Ethan Hawke; actress and singer Karen Akers; musician Paul Winter; Cathedral of St. John the Divine poet-in-residence Marilyn Nelson and many other noteworthy musicians, performers, and poets will stage a gathering Jan. 23 at the cathedral in Manhattan to reaffirm “what we’re for, not what we’re against” and to “recommit to the values we hold in common.”  Cathedral friend and Episcopalian actor Anthony Newfield will be the master of ceremonies. More information is available here.

Editor’s note: A previous version of this story included information about a peaceful prayer vigil planned for Jan. 21 outside Washington National Cathedral during the National Prayer Service. That service has been canceled due to Secret Service security restrictions around the building that day.