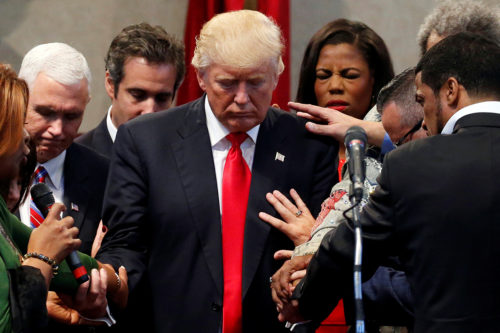 [Episcopal News Service] The involvement of Washington National Cathedral and its choir in the upcoming inauguration of President-elect Donald J. Trump has stirred concern in parts of the Episcopal Church.

The Cathedral Choir accepted an invitation to perform during the musical prelude to the Jan. 20 inauguration ceremony. That prelude begins at 9:30 a.m. EST. The actual ceremony is scheduled to start at 11:30 a.m. The program is here.

The cathedral confirmed three weeks ago that it would once again play out one of its traditional roles in U.S. life by offering Trump and the nation a chance to come together in prayer. The invitation-only 58th Presidential Inaugural Prayer Service will take place at 10 a.m. Jan. 21, the day after Trump is sworn in as the 45th president.

After news of the choir’s participation prompted a deluge of comments on social media as well as emails to officials involved, Presiding Bishop Michael Curry, Diocese of Washington Bishop Mariann Budde and Cathedral Dean Randolph Hollerith all issued statements on Jan. 12 addressing those concerns.

Acknowledging that there has been “much discussion, and some controversy” about the appropriateness of the cathedral hosting the traditional prayer service, and of one of its choirs singing at the inauguration, Curry said that those issues raise “some basic Christian questions about prayer.”

“When I pray for our leaders, why am I doing so? Should I pray for a leader I disagree with? When I pray, what do I think I am accomplishing?” is how Curry described the questions.

The presiding bishop said the practice of prayer for leaders is “deep in our biblical and Anglican/Episcopalian traditions.”

Curry said that tradition of prayer means Episcopalians are praying that “their leadership will truly serve not partisan interest, but the common good.”

“We can and, indeed, I believe we must pray for all who lead in our civic order, nationally and internationally. I pray for the president in part because Jesus Christ is my Savior and Lord,” he said. “If Jesus is my Lord and the model and guide for my life, his way must be my way, however difficult. And the way of prayer for others is a part of how I follow the way of Jesus.” 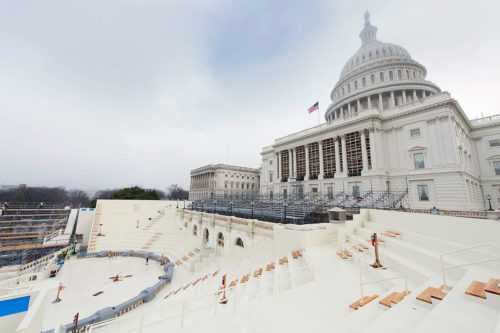 Construction on the 58th Presidential Inaugural Platform continued Jan. 4 on the west front of the U.S. Capitol. Photo: Joint Congressional Committee on Inaugural Ceremonies via Facebook

Prayer is both “contemplative and active,” Curry said, adding that people who pray should both listen to God, and serve and witness to the world in the name of Jesus.

“We participate as followers of Jesus in the life of our government and society, caring for each other and others, and working for policies and laws that reflect the values and teachings of Jesus, to ‘love your neighbor,’ to ‘do unto others as you who have them do unto you,’ to fashion a civic order that reflects the goodness, the justice, the compassion that we see in the face of Jesus, that we know to reflect the very heart and dream of God for all of God’s children and God’s creation,” he said.

Hollerith replied to questions about the choir’s participation in his statement.

“Our choir is singing at the inauguration to honor the peaceful transition of power that is at the heart of our democratic government,” he said. “Let me be clear: We do not pray or sing to bless a political ideology or partisan agenda, regardless of the man (or woman) taking that sacred oath of office. We sing to honor the nation.”

The dean said choir members are not required to participate in what he called “part of our call to serve as a spiritual home for the nation.”

“In our bruised and polarized country, we hope the gift of our music can help remind us of our highest ideals and aspirations as one nation under God,” he said.

Budde said that “while I do not ask you to agree, I simply ask you to consider that we, too, acted on spiritual principles.

“Those principles, while they may seem to conflict with yours, are also essential for the work that lies ahead.”

The first principle, she said, is that Episcopal churches “welcome all people into our houses of prayer.”

“Welcoming does not mean condoning offensive speech or behavior; it does not mean that we agree with or seek to legitimize,” she said. “We simply welcome all into this house of prayer, in full acknowledgment that every one of us stands in need of prayer.”

The second principle, Budde said, is that “in times of national division, the Episcopal Church is called to be a place where those who disagree can gather for prayer and learning and to work for the good of all.”

Saying she is “alarmed by some of Mr. Trump’s words and deeds and by those who now feel emboldened to speak and act in hateful ways,” Budde said. “I believe in the power of God to work for good, and the capacity of our nation to rise to our highest ideals.”

Episcopalians and others have also questioned whether the cathedral ought to host the customary prayer service for the incoming president on the day after the inauguration.

Beginning with President Franklin Delano Roosevelt’s first inauguration in 1933, presidential inaugural prayer services have taken place at Washington National Cathedral, which calls itself a “house of prayer for all people.” That tradition has been more recently consistent since President Ronald Reagan’s second inauguration in 1985. The exception was President Bill Clinton, who chose Metropolitan African Methodist Episcopal Church, the historic black church in downtown Washington, for both of his inaugural prayer services. The cathedral has also been the location of funeral and memorial services for nearly all the 21 U.S. presidents who have died since the cathedral’s founding.

“At a time when emotions are raw, we hope to offer a few moments of spiritual solace and the healing gift of transcendent beauty,” Budde said. “We also want the nation to know that we are still here, as people of hope. While the inauguration is a civic rather than a religious ceremony, it is also an occasion for prayer and an opportunity to offer the balm of beauty.”

Budde previously said she would participate in that service, as is traditional for the bishop of Washington which includes the District of Columbia and four neighboring counties in Maryland.

Curry has asked Bishop Suffragan for the Armed Forces and Federal Ministries James “Jay” Magness to represent him at the prayer service because the presiding bishop will be leading a pilgrimage of reconciliation to Ghana, a commitment he made more than a year ago.

Editor’s note: A previous version of this story indicated that the Washington National Cathedral Choir of Men and Boys is scheduled to participate in the inauguration’s musical prelude. This story was updated at 11:15 EST Jan. 13 to clarify the fact that the entire cathedral choir is participating.