Jordan Dresser holds a photograph of Edith May Adams, a deacon who lived on the Wind River Reservation decades ago. Adams bought and bartered for cultural objects from Indians who needed food and other necessities. She later provided for the Diocese of Wyoming to hold her collection in safekeeping for the reservation’s tribes. Screenshot: What Was Ours

[Episcopal News Service] Part of the legacy of the Episcopal Church’s history on the Wind River Reservation in Wyoming intersects with the issue of ownership of tribal cultural artifacts as portrayed in a new documentary.

“What Was Ours,” follows the journey of Jordan Dresser, a young Northern Arapaho journalist who returned to the reservation southeast of Yellowstone National Park after graduating college. Dresser got a job at the Wind River Casino where he was asked to establish a tribal museum. However, he found that the Eastern Shoshone and Northern Arapaho tribal members no longer possessed many sacred objects from their pasts.

The documentary, directed by Mat Hames, will premiere on PBS’ Independent Lens Jan. 16 from 10 to 11 p.m. Eastern (check local listings).

Philbert McLeod, an Eastern Shoshone elder, smells the hide of a drum at the Field Museum in Chicago, Illinois. Screenshot: What Was Ours

Mikala SunRhodes, a Northern Arapaho high-school student and powwow princess, and Philbert McLeod, an Eastern Shoshone elder whose last trip off the reservation was when he left to fight in Vietnam, travel with Dresser literally and figuratively as they search for their cultural artifacts.

The object of the project was, in Dresser’s words, “to be able to tell our story in the way we want to tell it.”

Part of their journey took them 150 miles off the reservation to the Diocese of Wyoming’s offices in Casper where they viewed artifacts that form the Edith May Adams Collection.

Workers in the Experience Room at the Wind River Casino unpack a dress from the Diocese of Wyoming’s Edith May Adams Collection. Screenshot: What Was Ours

Adams, a deacon of the church, lived on the Wind River Reservation decades ago and purchased items from tribal members in need of cash. She specified in her will that the artifacts be turned over to the church for safekeeping for the tribes. She supplied a substantial amount of money for the maintenance of the nearly 200 objects at the direction of the diocesan bishop.

The fact that she wanted to make the objects accessible to the tribes is “such a simple thing, but it is such a strong thing,” Dresser says. Adams may not have known who to go to or where to go to accomplish her goals, he adds, “so she went with the organization she trusted; that was her Episcopal faith.”

“In a way, I am grateful for her to do that because who knows where they could have ended up.” 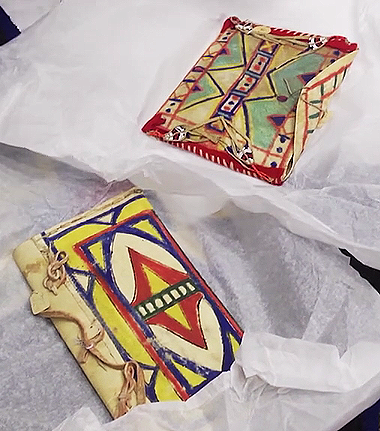 Two parfleches from the Diocese of Wyoming’s Edith May Adams Collection sit for display at the Winder River Casino. Screenshot: What Was Ours

Using a casino to achieve that accessibility was not a clear choice. Wyoming Bishop John Smylie says in the film that at first, he was hesitant to loan objects for the project. Admitting that his first reaction “was not hugely positive.” He says he thought there were “moral and ethical issues” about displaying the objects in a place where people might be coping with gambling addictions. “I wanted to be sure we were doing the right thing,” he said.

Smylie was not the only one. The bishop came to St. Michael’s Episcopal Mission in Ethete on the Wind River Reservation and said he would not lend the casino any of the objects without the Northern Arapaho congregation’s blessing. “The first reaction on the artifacts going to the casino was ‘no’,” says Aaron Friday, a St. Michael’s member. “The older ones told us ‘No, we don’t want them there. They don’t belong there.’”

Members of both tribes had qualms – some of them cultural – about displaying such objects anywhere. They were concerned about the objects’ power and whether some had come from burial sites or simply that they once belonged to people who are now dead.

“You have to go through all sorts of rituals for them things before you can even touch them,” one Shoshone woman, a tribal elder, warns during a discussion about the proposed display. “Otherwise the tribe could be hurt.”

After such soul-searching, the diocese agreed to loan objects from the collection to be displayed at the Experience Room at the Wind River Casino in Fort Washakie on the Shoshone side of the reservation. The casino is one of four on the reservation and the four are the only casinos in Wyoming.

The decision to approach the diocese was partially expedient and partially strategic. The collection was close by, Dresser says, and forging an agreement might show large museums elsewhere that the tribes could care for the artifacts.

The Field Museum in Chicago, Illinois, was one such museum. Dresser, McLeod, SunRhodes and other tribal members traveled there after learning that the museum contains many cultural artifacts of the two tribes, purchased from tribal members in the early 20th century.

Although a museum official offers in the film to help the tribes open discussions about repatriating the object, Dresser says the visit was bittersweet. “We went there to view pieces of ourselves but we had to leave them there,” he says.

The documentary also addresses why Adams and the Field’s curators could acquire such artifacts. Dresser says the late 1800s and early 1900s were hard times for Indians. “Selling objects was a way for them to eat, a way for them to live,” he says. Smylie agrees, saying some tribal members bartered for food and other necessities with the objects.

“These were people who needed those cash funds,” says Jonathan Haas, a Field Museum curator emeritus. “Their traditional culture had been removed from them and they were forced to participate in an economy what wasn’t theirs.”

Smylie says in the documentary that it takes a long time to heal from the kind of trauma and abuse that the Wind River members suffered, but that building relationships is one way to help heal those wounds. The decision to loan some of the Adams collection’s objects to the reservation means “we can open up the collection more than we were ever able to over the last 50 years.”