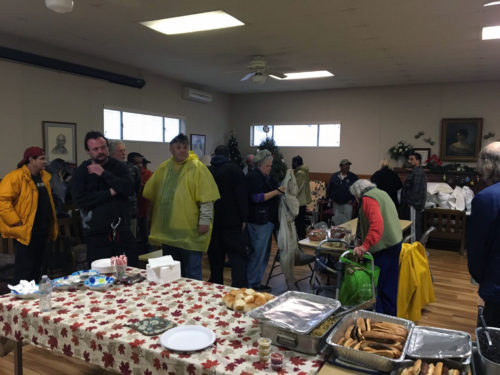 [Diocese of Northern California] It may signal the end of a long, hard drought for California, but the storm that blew in the weekend after New Year’s also brought flooding and misery, especially for those without permanent shelter.

But St. Paul’s in downtown Healdsburg, Sonoma County, was ready for the influx of homeless people displaced from makeshift camps along the Russian River by the rising waters. And they did it by marshaling the resources of an entire community.

On Jan. 8, the river crested at close to 20 feet near Healdsburg – 23 feet is considered flood stage according to the National Oceanic and Atmospheric Administration – and people who call the riverbank home had to be moved quickly to safer areas.

The Rev. Sally Hubbell, priest-in-charge of St. Paul’s, said in a phone interview that she began making plans ahead of the projected storm with Colleen Carmichael, a parishioner and executive director of North Sonoma County Services, whose mission is to end homelessness in northern Sonoma County. Weather forecasts were predicting that Northern California was due to be hit by what’s known as an “atmospheric river,” or water vapor in the atmosphere that changes to rain or snow when it makes landfall. The last major event of that kind in California happened in 2005 and caused $300 million in damage, according to news reports. 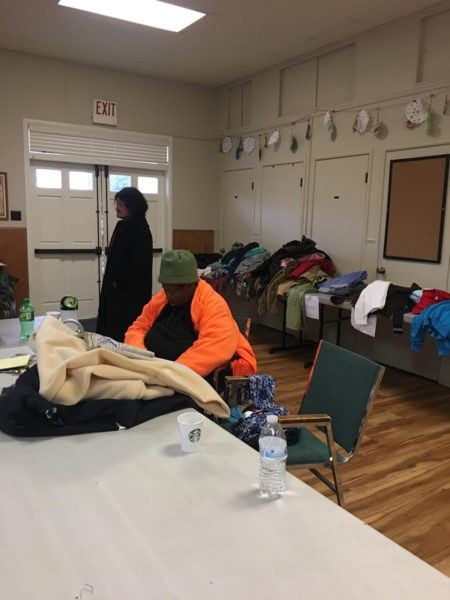 Hubbell and Carmichael arranged for cots to be brought into the church parish hall and volunteers from the church and the community to staff an emergency shelter.

The advanced planning turned out to be fortuitous.

“Around 6 or 6:30 [on Sunday morning] we got a call saying people’s camps had been washed out,” Hubbell said. “And we started getting people coming into our parish hall.”

“This storm was a reminder that we have a community that is impacted more than others during these types of events,” said Carmichael in a statement. “We were grateful to all the people in the community who came together to help those in need.”

Community members kept on showing up. On the evening of Jan. 8, after the people staying over were already resting on their cots, a person unknown to the volunteers delivered five pizzas to the temporary shelter.

One of the reasons St. Paul’s was able to mobilize so quickly is that it has a long tradition of service to the homeless, and is a focal point for coordinated efforts with government agencies and nearby churches.

St. Paul’s hosts a regular shower ministry from Tuesday to Friday every week, providing an essential service for those without shelter.  It also founded a group that managed 11 units of transitional housing owned by the city; that group eventually became the non-profit North Sonoma County Services.

Hospitality celebrated through communal meals is another tradition at St. Paul’s. The church has a large coffee hour on Sunday, along with three services, plus a community meal in the evening where a group of area churches offers a meal and hospitality at St. Paul’s. On Jan. 8, it was the Healdsburg Adventist Church’s turn to provide a meal, and there were also “lots of other food donations,” Hubbell said.

Neighbors and parishioners also donated clothing, much needed by people who got soaked in the rain.

Still another faith community, Healdsburg Community Church, answered the call and brought food to St. Paul’s on the morning of Jan. 9 to provide breakfast for those seeking sustenance and shelter.

It was fitting that in her Jan. 8 sermon celebrating the Baptism of Our Lord, Hubbell preached about “a partnership in righteousness.”

“How about when one person washes dirty towels for the shower ministry, delivers them folded and clean, and another person hands them out to people who have come to take showers,” she said. “The whole shower ministry at St. Paul’s is a partnership in righteousness!”

The weather system that drenched the region over the Jan. 7-8 weekend passed, but Jan. 9 brought more rain and falling temperatures.

The partnership between St. Paul’s, its faith partners and its community will continue, Hubbell said, with the church committed to keeping the temporary shelter open until the storm has abated. Further down the road, the church hopes to find and support more programs that offer solutions to the complex problems of homelessness.

— Paula Schaap is communications director in the Diocese of Northern California.