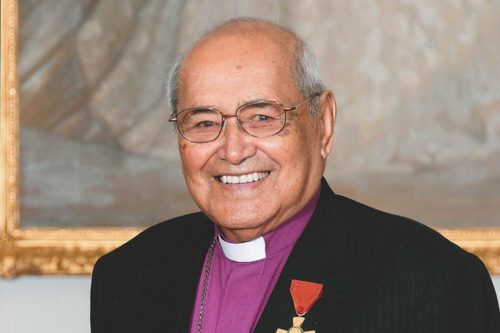 [Anglican Taonga] Archbishop Brown Turei, one of the leaders of the Anglican Church in Aotearoa, New Zealand and Polynesia, died peacefully in Gisborne Hospital on Jan. 9 surrounded by his family and loved ones. He was 92.

Turei, who had ties to the Ngati Porou and Te Whanau-a-Apanui Maori tribes, had signaled his intention to retire from ordained ministry earlier last year.

He had planned to step down as bishop of Tairawhiti, and also to resign as archbishop and pihopa o Aotearoa – or leader of Te Pihopatanga o Aotearoa, the Maori arm of the Anglican Church – in March this year.

“Maoridom and the Anglican Church have lost a leader of enormous stature,” said Archbishop Philip Richardson. “Archbishop Brown was a gentle and wise leader, who brought grace, compassion and insight to all that he did and said.”

Archbishops Philip Richardson and Winston Halapua, who have shared the leadership of the Anglican Church in Aotearoa, New Zealand and Polynesia with Turei, say they have lost not only a colleague but also a dear friend.

Turei was ordained a deacon in 1949 and a priest the following year.

He was chosen as archdeacon of Tairawhiti in 1982, and has had a long association with Hukarere Maori Girls’ College. He became the chaplain there in 1984, and he also served as chaplain of the Napier Prison for four years.

His election as Te Pihopa ki Te Tai Rawhiti in 1992 followed the reforms of the Anglican church here in 1990.

In 2005, he was elected Te Pihopa o Aotearoa, and in 2006 he was installed as primate and archbishop of the Anglican Church in Aotearoa, New Zealand and Polynesia. Last year Turei was made on officer of the New Zealand Order of Merit (ONZM) for his services to the church.

Turei, who was highly respected for his ability to relate to people across all races and cultures, was the oldest primate in the Anglican Communion. The church is being asked to pray for Turei’s wife Mihi, and his children, grandchildren and extended whanau. Funeral arrangements are yet to be finalized.