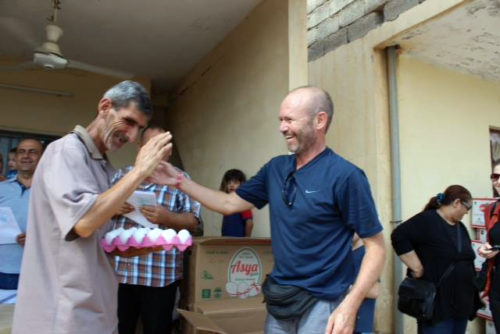 [Episcopal News Service] The way the Rev. Christopher Bishop tells it, it took just one pivotal conversation for him to feel a powerful calling to travel to northern Iraq as an unofficial Episcopal ambassador to displaced Christians, whose lives have been threatened by the rise of the group known as Islamic State, or ISIS.

Bishop likens his awakening to the crisis to the moment years earlier when he suddenly felt called to become an Episcopal priest. In each moment, his life and labors took a sharp turn onto a new spiritual path.

Bishop now is the driving force behind Stand With Iraqi Christians, which has grown over two years into an independent nonprofit organization with international partners and a growing slate of ministries. It began in late 2014 as an effort of his congregation, St. Martin’s Episcopal Church in Radnor, Pennsylvania.

“We had no idea what we were doing, but we had this heart for it,” Bishop said, and members of the church still are actively involved in supporting the mission of Stand With Iraqi Christians.

So far, the organization has supported efforts to help Iraqi Christians with housing, employment and youth counseling. And Bishop, who worked as a filmmaker before becoming a priest, has traveled to Iraq and shot footage for a short documentary that now is being used to raise awareness of the displaced Christians’ plight.

“Chris is a very talented guy, and he’s willing to listen very carefully, which is really a tremendous gift for working in cultures that are not our own,” said the Rev. Canon Robert Edmunds, the Episcopal Church’s Middle East partnership officer.

The church already had a presence in the region through the Episcopal Province of Jerusalem and the Middle East, of which Iraq is a part through the Anglican Diocese of Cyprus and the Gulf. Congregations in the United States have supported Episcopal ministries in the Middle East through the annual Good Friday Offering, which collects about $350,000 a year, Edmunds said.

“The good news is people like Chris Bishop emerge from time to time with an interest and a capacity to advocate, to be healthy and helpful advocates for Christians in the region,” Edmunds said. “Chris is a paramount example of that.”

Bishop, 56, has a strong pedigree: His father was an Episcopal priest in Ohio, upstate New York and Connecticut. But when he was younger he stopped going to church, calling his father’s faith “a lot of baloney.” 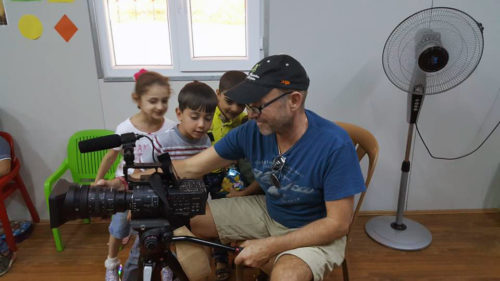 The Rev. Christopher Bishop shows Iraqi children his video camera during his October 2016 visit to the Ashti Camp in Iraq. Photo: Stand With Iraqi Christians

He studied film in college and, based in New York City, pursued a successful career making documentaries and teaching film studies. But he also often felt disconnected, always observing people through a lens and rarely getting involved in their lives.

He decided to leave his work in New York and start fresh in northern Michigan, where his family had a summer home. Then in early 2004, he came across a newspaper ad for General Theological Seminary back in New York City. Immediately, he felt called to the ministry and enrolled in the seminary.

Bishop was ordained in 2007 and first worked as a priest in Hoboken, New Jersey, before taking over as rector at St. Martin’s in 2011.

Current events in the Middle East were far from his mind. He said he actively ignored the rise of ISIS when violence began making headlines in 2014. His turning point came late that year when a parishioner’s father, who had lived and worked in Iraq, told him about the problem of Christians forced to flee their homes in Mosul after ISIS took over the city.

ISIS-committed atrocities against local populations have been so severe that U.S. Secretary of State John Kerry in March 2016 described ISIS as being “responsible for genocide against groups in areas under its control,” including Iraqi Christians.

“It’s entire worldview is based on eliminating those who do not subscribe to its perverse ideology,” Kerry said.

Christianity’s roots in Iraq are nearly as old as the faith itself. Today’s Christian communities in Iraq are concentrated to the north, where the Chaldean Catholics are the largest group, according to a 2014 overview by The Economist. That report cited estimates of as many as 1.5 million Christians in Iraq before the 2003 U.S. invasion, a number that had since dwindled to as few as 200,000.

Many of those Christians have fled east from Mosul to the Kurdish-controlled region in northern Iraq, particularly the haven city of Erbil. Their struggle with poverty in camps is what mobilized Bishop. He saw them as ignored by the outside world – including fellow Christians – and he resolved to go to Iraq and learn more about what could be done.

His congregation supported the mission, first by raising money and helping to get Stand With Iraqi Christians off the ground. Church members also were supportive of Bishop’s decision to travel overseas in September 2015 for his first of three trips to Iraq.

He spent 12 days in Iraq filming footage that he would use to make “Where Is Our Place?” with the help of producer and editor Andrew Bilindabagabo. The 36-minute documentary features Bishop’s interviews with Christian leaders and displaced Iraqis about life in the camps, the fear of ISIS that prompted so many to leave their homes and the psychological toll felt by the families.

“What’s happening in the Middle East is a genocide. It is ethnic cleansing. It is a persecution,” Chaldean Archbishop Bashar Warda says toward the end of the film. “And this land holds so many indigenous peoples who would like to live peacefully and to contribute to the country,”

On that first mission trip, Bishop also used the money raised by his congregation to provide tablet computers for teachers in the camps, a sewing machine for seamstresses, and food for 80 of the displaced families. Stand With Iraqi Christians is now looking beyond emergency aid to help make a difference in the region.

“We want to be in it for the long game,” Bishop said. One example this fall was a home-building project three hours south of Erbil, in Sulaymaniyah, to replace the tents that were providing insufficient shelter from the elements. Stand With Iraqi Christians is funding educational projects for The Etuti Institute, an Erbil-based youth organization. And, in a foray into microfinancing, $900 went to help a man in Erbil set up a new copy-shop business.

A U.S.-led coalition launched new attacks on ISIS this fall in an attempt to retake Mosul, giving displaced Christians new hope of eventually returning to their homes in that region.

“That was the Christian heartland, and it’s heartbreaking that so many Christians had to leave it – going into, usually, internally displaced persons camps … or they actually physically left the borders of Iraq,” said Bishop Michael Lewis of the Diocese of Cyprus and the Gulf.

He and other Episcopal leaders in the region are encouraged by Bishop’s dedication to Iraqi Christians and are looking to coordinate efforts with his group.

Underlying those efforts is a desire to be present as fellow Christians, Bishop said.

“Our first role is to listen … and walk with them through this horrible calamity that they’ve been through,” he said.