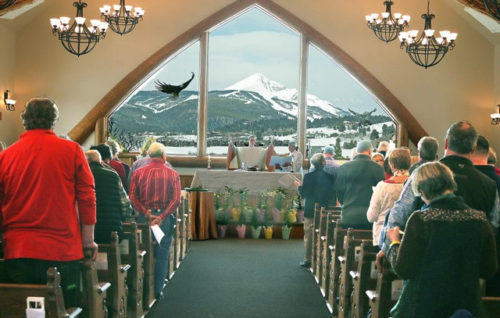 Worship at All Saints in Big Sky, Montana.

For the congregation of All Saints in Big Sky, Montana, the saying is literally true. A shared ministry of the Episcopal and Lutheran churches, the congregation rents space for worship and meetings and has no building of its own.

Without the cost of maintaining a building, the congregation devotes its resources for programming and staff. They hired their first full-time pastor/priest in January 2016. Not having a building also eased some of the potential difficulties of uniting two congregations, said the Rev. Miriam Schmidt, the Lutheran pastor/priest of All Saints.

When the congregations began talking about a union congregation in 2005, they didn’t have to figure out whose building to sell and whose to keep—or how to make old space feel inviting to a new group. Instead, the congregation meets at Big Sky Chapel, an ecumenical space built by the community in the late 1990s. In addition to All Saints, two other congregations also worship in the space: Roman Catholics and a nondenominational Christian fellowship.

Adding this other layer of ecumenical cooperation means some headaches: putting new hymnals in the pews after each service, coordinating meetings and special services. But it is home for the people of All Saints and seen as a resource and gift to the broader community.

“It’s this place that people think is beautiful, and they love it,” said Schmidt. “They want to figure out how to share it.”

Collaboration and compromise have been hallmarks of All Saints from its beginning. 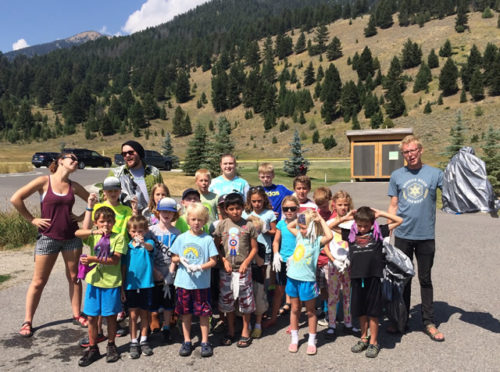 Youth and leaders at the congregation’s day camp this summer.

Episcopalians and Lutherans from Big Sky worked together to develop a proposal for a union congregation. Both bishops reviewed and approved it, and in 2008, the congregation called its first pastor/priest. Because they were the first union congregation of its kind in Montana, All Saints charted new territory. Accounting was an area of challenge, said Laura T. Sacchi, one of the team members who worked to develop the union congregation. The Episcopal diocese charged an assessment of 19 percent; the Evangelical Lutheran Church in America’s synod asked for a freewill offering. The congregation decided to give 19 percent to both denominations.

The situation became more complicated because assessments are often determined by membership, attendance and budget. How would All Saints determine which people were Episcopalian, which were Lutheran, and which were from other denominations? And which denomination would get a portion of the money given by Baptists and Methodists and others attending All Saints?

“We decided to simplify our accounting,” said Sacchi. Now, they split the budget in half and send the same percentage to each denominational center. 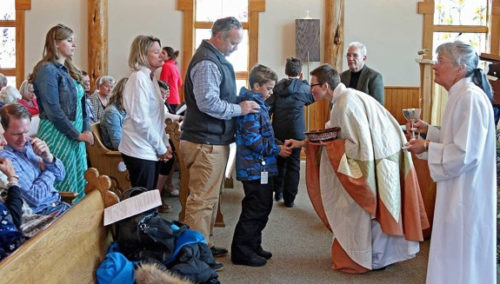 Jeanne and Patrick Miller agree that developing a common structure was one of the biggest challenges to forming a union congregation. In fact, said Patrick Miller, he still has an unfinished draft of a constitution and bylaws on his desk. After several go-rounds in trying to craft language that would fulfill both Lutheran and Episcopal requirements, the congregation ended up developing “joint policies and procedures.” The leadership plans to review and hopefully resolve the issues in 2017.

For worship, the people of All Saints rotate between Episcopal and Lutheran services.

Early on, sometimes people would only attend their denomination’s service and not go to the opposite one, said Jeanne Miller. Or they would lament the absence of their favorite service or prayer, something they knew by heart or remembered fondly from childhood.

Today, that’s not an issue, she said. “We’re not hearing that anymore. People are starting to relax and really enjoy how we’re doing worship together.”

The process of becoming one congregation has made it a healthier one, Sacchi said. Because parishioners had to learn how to compromise and sacrifice from the beginning, they already have the tools to navigate disagreements.

Sacchi also believes that being a union congregation is driving growth, with 90 or so attending on in-season Sundays.

“The word has gotten out that we’re this joint ministry and that we welcome people of all denominations,” she said. “Then it snowballs. The more of us who are here, the more people hear about us.”