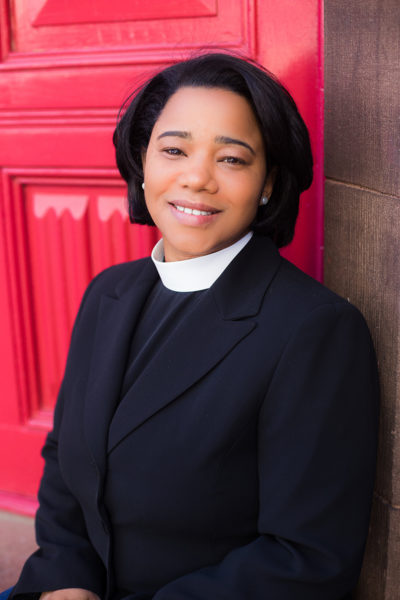 The Very Rev. Miguelina Howell is the first Latina dean in the Episcopal Church. She was installed as dean of Christ Church Cathedral in Hartford, Connecticut, in February. Photo: Amanda Trahan

[Episcopal News Service] Remembering the sounds of traditional Anglican hymns accompanied with merengue beats transport the Very Rev. Miguelina “Lina” Howell back to the Episcopal Church in the Dominican Republic, where her fire for ministry was ignited.

Howell remembers as a child the joy of participating in church and hearing the beautiful worship music. A lifelong Episcopalian, she watched her parents serve as lay leaders in their church and was inspired to get involved too. At 8 years old, she became an acolyte and was an “honorary” member of the church altar guild. Her father was the sexton of their church and together they would arrive early on Sunday mornings to set up the altar.

“A long-lasting impact of my time serving in the Episcopal Church in the Dominican Republic was the opportunity to experience the profound sense of joy and commitment of lay leaders as they fully engaged in God’s mission in their communities and the vibrant nature of the ministry of Episcopal schools across the diocese,” said Howell, who last February became the first Hispanic woman called to serve as a cathedral dean in the Episcopal Church.

A life-altering experience 26 years ago confirmed Howell’s calling to the priesthood. At 16 years old, she attended a youth event at Misión Santa Cruz, an Episcopal church in the Province of San Pedro de Marcorís, and saw a woman celebrating the Eucharist for the first time.

“It was the most relevant ‘aha’ moment of my life,” she said. “When I saw the Rev. Margarita Santana, the first female ordained to the priesthood in the Dominican Republic, behind the altar, it was clear to me that serving God’s people as an ordained minister was possible for me as well.”

This moment of discernment shaped everything that followed, from Howell’s decision to study clinical psychology to attending seminary. A few years later, she was appointed to serve as youth ministry coordinator for Province IX, and in 1997, she represented the pre-Lambeth young adult gathering in England. She also received a degree in theology from Centro de Estudios Teologicos in Santo Domingo and her license as a clinical psychologist from Universidad Pedro Henriquez in the Dominican Republic.

Howell was ordained to the diaconate in 2002 and to the priesthood in 2003. She served first in the Dominican Republic, planting two churches and a school and working with youth. She also was elected twice to fill vacancies on the Episcopal Church’s Executive Council. 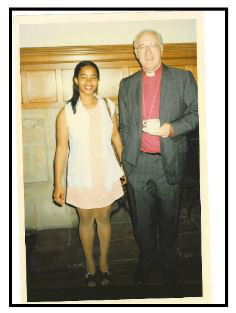 In 2008, her life took a big turn: St. Paul’s Episcopal Church in Patterson, New Jersey, invited her to serve as associate rector. Accepting the call meant leaving behind her country and her home, and making a new life in the United States. Not only did she have to leave her family, but she also had to minister in English, which was not her first language. This was one of her biggest challenges, she said. She was also dating her now-husband Daniel Howell, an American, so love also played a role in her move, she said.

“I came to this country with a whole lot of faith, two suitcases and a box of books, trusting God’s will in my life. I experienced a significant amount of inner peace about the decision to explore new territory away from my homeland,” she said. “At times, it was challenging for my family and friends to understand my choice and I am thankful they supported me throughout my transition and beyond.”

Now at 40 years old, she is the first Hispanic woman dean in the Episcopal Church.

“We have been ordaining women for 40 years and even at this stage, the church (hierarchy) is predominately male … so for a woman to be a dean of a cathedral is a big thing, and the fact that she is the first Latina dean of a cathedral, the two things together are a real code of pride for the people from the Dominican Republic who saw her grow up and saw her leadership. … They are very proud of her and those of us Latinos in the church are proud of her,” said Guillén.

Christ Church Cathedral invited Howell to serve as vicar in 2013. During that time, the church was between deans and was looking for a dean who could help serve their new Latino community and the parish. 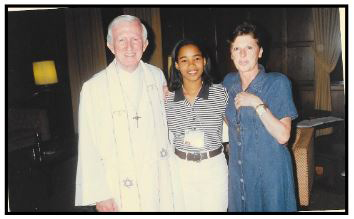 Miguelina Howell with the 24th presiding bishop of the Episcopal Church, the Most Rev. Edmond Lee Browning, now deceased, and his wife Patti.

The cathedral was studying how to become a 21st-century cathedral and wanted a dean that could help lead this new vision, said the Rev. Timothy Hodapp, an associate priest and the Diocese of Connecticut’s canon for mission collaboration. Howell’s youth, her ability to communicate strongly in both English and Spanish, her gift of understanding people and bringing them together, and her extensive experience in ministry and strong faith were qualities that made her an excellent candidate for the position.

“Her greatest strength is that she is a believer in Jesus Christ and she has the heart of a priest,” said Hodapp.

She has already made an impact with her leadership: She has reached out to surrounding schools, other denominational churches and local officials including the mayor’s office to find out how they can all work together, he said.

Howell recognizes the significance of her historic position and hopes to inspire other women to ordained ministry; however, she said her main focus is being a child of God who is willing and ready to serve.

“For me it’s not about my gender or ethnicity, it’s about the God-given gifts bestowed upon me as a child of God to serve God’s mission at Christ Church Cathedral and the larger Episcopal Church,” she said. “Being a woman and a Latina are aspects of my identity that I cherish and I do recognize how those aspects enrich my ministry and allow me to serve God’s ever changing, multicultural church in a unique way.

“This has been the most exciting 10 months of my ministry in the United States. … Every day is a new day.  God is doing a new thing in the Episcopal Church in Connecticut and I am blessed to be part of it.”