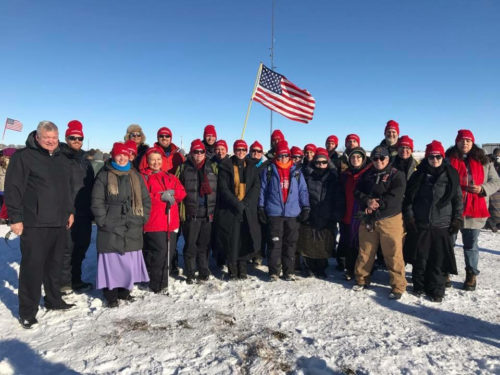 [Episcopal News Service – Cannon Ball, North Dakota] When the trauma chaplains who volunteered to go to the Standing Rock Sioux Nation in North Dakota answered the call, none of them knew exactly what to expect.

Thousands of military veterans were planning to descend on the Oceti Sakowin Camp just north of the reservation to stand between those opposed to the Dakota Access Pipeline, known as water protectors, and the Morton County Sheriff’s Department and other law-enforcement personnel from across the country.

The chaplains and veterans alike had seen news coverage of law-enforcement personnel using water cannons in sub-freezing weather, along with rubber bullets, tear gas, pepper spray and acoustical devices, on the water protectors in late November at the Backwater Bridge on Highway 1806, and wanted to stand in support of the water protectors. Both groups were worried that if violence broke out between water protectors – and their supporters – and law enforcement personnel, a lot of emotional trauma would surface. 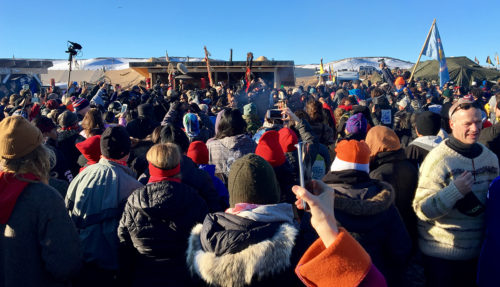 The crowd at the sacred fire at the Oceti Sakowin Camp. The red-hatted people in the center are trauma chaplains. Photo: Lauren R. Stanley

The Rev. John Floberg, the priest in charge of the Episcopal church on the North Dakota side of Standing Rock, was worried about that potential trauma, and asked the Rev. Canon Michael Pipkin, missioner for missional management in the Episcopal Church in Minnesota, to put together a team of trauma chaplains who could serve all sides of the controversy.

“That doesn’t mean we don’t get to have an opinion,” Pipkin said, “but opinions don’t heal people. God’s love heals people, and we were here to share God’s love.”

Pipkin added that “each of our chaplains took an enormous risk in responding to a call that none of us knew, at the beginning of any day, what we might experience, who we might encounter, what dangers were in store for those we were here to care for.” 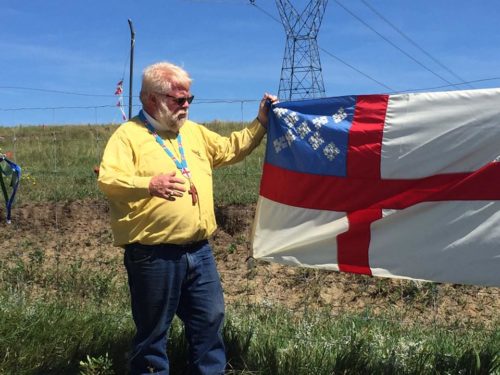 The Rev. John Floberg stands near an Episcopal Church flag that was added to the flags of other organizations and tribes participating in the protest against the Dakota Access Pipeline. Photo: John Floberg Facebook page

The call for the chaplains was made possible, he said, “because of the work that John Floberg has done here on the Standing Rock for 25 years. His call for clergy to come in November was a natural extension of his passion for these people, as was his recognition as a veteran (of the Coast Guard) of the needs that the veterans bring.”

All of the chaplains agreed that the specific invitation from Floberg and the Standing Rock Sioux Tribe leadership was important to their discernment of whether to go to North Dakota.

As the chaplains arrived from around the country, they underwent training and orientation, and prepared for what could have been a contentious situation. The U.S. Army Corp of Engineers, which controls the federal land where the main water protectors’ camp was situated as well as the Missouri River, previously had announced that the protectors had to abandon the camp by Monday, Dec. 5. Protectors and veterans alike had vowed to ignore that order, as well as subsequent orders by the state of North Dakota to leave.

Then on Sunday, Dec. 4, the Corps announced it was denying the easement permit for Energy Transfer Partners, the pipeline builders, to drill under Lake Oahe, a widening of the Missouri River just north of the reservation. That announcement took everyone involved by surprise.

“This was not what I expected,” said Edie Love, a Unitarian Universalist candidate for ministry from Memphis, Tennessee. “I expected to be walking around offering pastoral care in the cold. I thought it would be emotional work instead of physical work, like digging snow to make a footprint for the chaplains’ tent early Sunday.”

Love was helping to set up that tent when word came that there was important news from the Corps of Engineers.

“I was crying tears of joy” when she heard the announcement. “There’s nowhere else on Earth I would rather have been in that exact moment,” she said. “It was electric.” 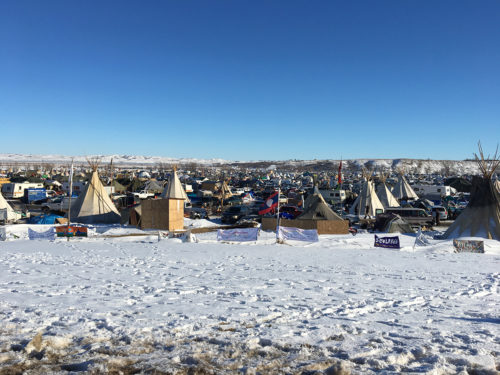 The Very Rev. Paul Lebens-Englund, dean of St. Mark’s Episcopal Cathedral in Minneapolis, had planned to come to the Standing Rock because of the eviction announcement, to be a chaplain and to “exercise my privilege to be a witness to whatever happened.” Once Pipkin realized Lebens-Englund was going to be there, he asked the dean to be part of the chaplains’ team. 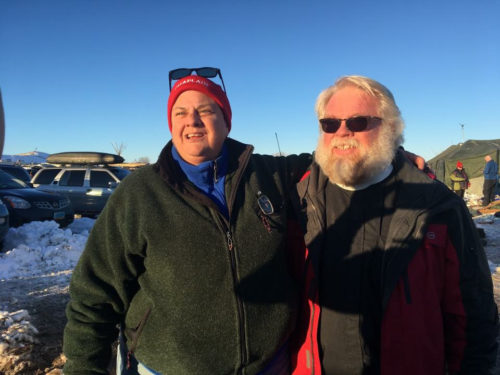 The Rev. Lauren R. Stanley, left, superintending presbyter of the Rosebud Episcopal Mission (West), and the Rev. John Floberg, priest-in-charge of the Standing Rock Episcopal Mission on the North Dakota side, shortly after the announcement by the U.S. Army Corps of Engineers. Photo: Paul Lebens-Englund

Lebens-Englund was moved by the experience of the Oceti Sakowin community. The camp, he said, had “incredibly profound and clear core values, and they circled around every day to make sure everyone knew that it was about love and mutual concern, and stopping the circle of violence … their mission is to witness to an alternative way of being together. … That’s the beauty of this.”

On Sunday afternoon, Lewis BrightHeart PureMountain Headrick, a Soto Zen Buddhist chaplain from Loveland, Colorado, was praying for a missing young man at the Two Spirit Camp inside Oceti Sakowin. As he finished, Headrick went to the chaplains’ tent and learned that people were gathering at the sacred fire.

Hedrick continued: “And then he said, ‘Here’s the first offer to be at peace between the tribe and the Army,’ and how truly amazing and remarkable it was to have this opportunity to have peace.”

For the Rev. Katharine Bradtmiller, associate rector at St. John the Evangelist Episcopal Church in Minneapolis, the call to be a trauma chaplain was an opportunity to live out the Baptismal Covenant. “Being a chaplain,” she said, “puts you in the position of having to respect the dignity of every human being. I’m deeply grateful for the courage it takes for people who are on the ground doing really hard work to welcome support from other people. … It’s a privilege to be in a place where people are all scared and courageous and working really hard.”

Bradtmiller and the other chaplains spent part of Monday, Dec. 5, working with veterans in several places, both at the camp and at the Prairie Knights Casino, where some veterans had gone to take part in a forgiveness ceremony.

“Most of what I did, both outside in a blizzard and in tents and indoors was listening to veterans struggling to find that intersection of their own story and the story of the indigenous peoples who were protecting this water, … where their own trauma and bravery and love and sacrifice met everyone else’s stories of trauma and bravery and love and sacrifice in a way that allowed them to protect people who needed protecting.”

Helping people find that intersection between their own experiences and those of others was core to the call for the chaplains, said Pipkin. “I recognize that suffering is an experience that binds human beings together. I hoped to be able to extend the love of these good people toward not just the water protectors but to the veterans, who bring with them a considerable amount of trauma, and the expectation that their trauma would merge with the trauma that is here.

“I also recognize that law enforcement on the other side of the bridge have difficult jobs to do, and while we may have certain feelings about that job, we have to recognize that oftentimes, law enforcement (personnel) experience something in the performance of their duties. I imagine being on the other end of that bridge has its own sense of trauma.”

On Dec. 5, when it was obvious that the Corps’ announcement and the blizzard had changed everything, “it became really apparent that the chaplains had an opportunity to make a real difference in the lives of people. The challenge was that the vets had very specific kinds of direct action (they were planning to take), but with the shift of the government’s position, the mission for them also shifted considerably. That meant that there were 4,000 veterans looking for a new mission, and a major blizzard was pressing down on the camp, so there was a volatile mix possible,” said Pipkin.

The chaplains split up to meet as many people and needs as possible. “I’m really proud of how the chaplains found places to be and chose strategic places, both at the front line, at the medical tent, at the casino … At every place that veterans were, the chaplains were in position to provide a calming presence.”

“Our chaplains were excellent at reading situations and anticipating where they would be used. … I don’t think we can take credit for peaceful outcomes, but it certainly was a privilege to experience a camp where prayer was the purpose,” he said.

Staycie Flint, a lay leader from All Saints’ Episcopal Church in Chicago who is endorsed by the Episcopal Church as a chaplain and is board-certified, responded to the call for chaplains because she “heard there was a need to provide complex care for people who have complex trauma with our veterans. I was expecting it to run up against generational, compounded trauma from the different tribes.”

“The traumas that we came out to deal with became different” after the Corps’ announcement, she said. “Because all the plans changed, there was a discombobulation among the veterans. I had very honorable and wonderful experiences among Native veterans and their sense of displacement among the plans. … Native veterans were talking about how their experience while serving always included being marginalized … (of) being always invisible. And then having their non-Native brothers and sisters come out here, and hoping they would finally be seen.”

Flint said, “This is the moral compass of our country right now, because it speaks to how we call each other in and live in unity, and loving each other. … The advantage of having trained people out here is that they knew how to stay present to what was happening for other people and not get caught up in their own experience, so that the people who needed their care could have their own experience and not have it usurped.”

Based on the team’s experiences on the Standing Rock, Pipkin said that it “seems to be that there is a natural opportunity to create a team of chaplains who can respond to emergency needs around the nation and beyond, whether it be to natural disaster, local conflicts, protest actions, terrorism, violence, or anywhere where human suffering requires a loving touch.”

“Whether it’s through a coalition of organizations like Episcopal Relief & Development and Lutheran Relief Services and Unitarian Disaster Response, that kind of thing could be possible.”

Pipkin added that one of the strengths of the chaplains’ team was that it was multifaith in nature, with Christians of many denominations “walking beside Buddhists and Unitarians and others.” He said that 30 of the 32 chaplains who signed up were able to make it to Standing Rock (two were stranded in the blizzard). There were 10 Episcopalians, three Buddhists, two United Church of Christ ministers, five Unitarians, six Disciples of Christ ministers and four pastors from the Evangelical Lutheran Church in America.

He also thanked the Episcopal bishops who supported the team, “especially Jeff Fisher, bishop suffragan of Texas, who gave generously from their discretionary funds for travel and equipment. Their generosity helped make this chaplaincy successful.”

– The Rev. Lauren Stanley, superintendent presbyter of the Rosebud Episcopal Mission West in South Dakota, was part of the chaplain team at Standing Rock.