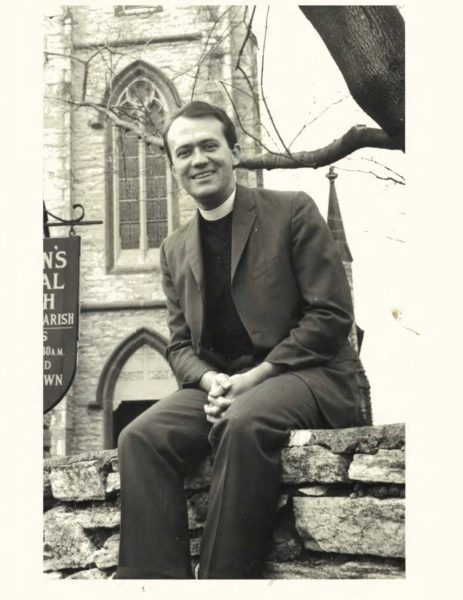 The son of Ervin Adams Brown Jr. and Annilee Thornhill Brown, Ervin Brown was born and raised in Birmingham, Alabama. He graduated from Ensley High School in 1954 and received a Bachelor of Arts in history from the University of Alabama in 1958, where he was inducted into the national honor societies Phi Beta Kappa and Omicron Delta Kappa. He was also chapter president of his college fraternity, Lambda Chi Alpha, and worked a year after graduation for the national fraternity visiting chapters around North America.

Erv then entered graduate school at Indiana University where he met his future wife, Letetia (Tish) Holloway, and received his Master or Arts in public administration in May 1960.

Erv and Tish were married at Church of the Redeemer in Baltimore in 1960. After serving as dean of men at Bowling Green State University, he entered Virginia Theological Seminary from which he was graduated in 1965.

He began his ministry as assistant rector at The Church of the Good Shepherd in Ruxton, and then as rector at St. John’s Episcopal Church, Glyndon. In the 1970s and ’80s, Erv served as rector at Episcopal parishes in Lynchburg, Virginia; Detroit, Michigan; and, St. Michaels, Maryland, before retiring in 2002 to Baltimore where he served as interim dean at the cathedral and on the staffs of the Church of the Redeemer and Memorial Church, Bolton Hill.

He and Tish shared a love of travel, and Erv took special pride in leading pilgrimages to the Holy Land, Britain and Spain. He was particularly moved by the plight of the Palestinian people and had a special relationship with leaders of the Anglican church in the Middle East. He also advocated for the rights of gays and lesbians and was asked by the bishop of the Diocese of Southeastern Michigan to perform the first blessing of a same-sex couple in the diocese in 1992. And although the University of Alabama football team was notoriously feckless during his college years, he was an avid fan the rest of his life, cheering them on to numerous national championships.

He is survived by his devoted wife of 56 years, Letetia, and by three adored children, Laura McCabe (Jim) ; Holly Elizabeth Brown and Paul Edmund Brown (Marnie ); his loving sister, Nell Charlton Brown Hampton of Scotland, Maryland, and her family survive him as well, as do numerous cousins and in-laws. Special gratitude from the family to Bill Roberts and the Partners in Care Ministry at Memorial who ministered to Erv’s health needs and were an indefatigable support during his final years

The joy of his later life was his relationship with his grandchildren, Ysabel, Ogden, Virginia and Amelia. Numerous close friends from the many communities he called home also mourn his passing