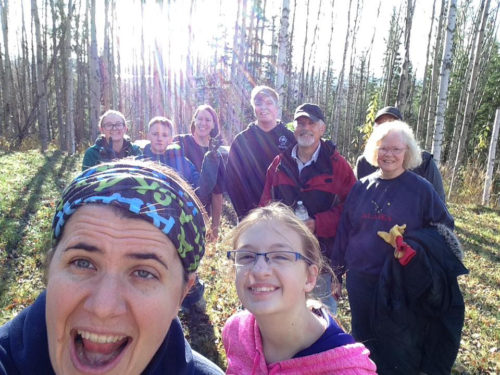 A group shot of Epiphany Lutheran-Episcopal Church members on a hike during a youth retreat this fall.

[Episcopal News Service] One of the oldest Episcopal-Lutheran congregations began with a handshake among bishops. The goodwill sentiment still guides Epiphany Lutheran-Episcopal congregation in Valdez, Alaska.

Located in Prince William Sound, the town of Valdez has a population of about 4,000. The nearest town with an Episcopal church is 250 miles away. Although there are 50 congregations in the Diocese of Alaska, most are very small village churches. Only a handful of seminary-trained clergy serve in the diocese.

“I tell the congregation all the time that they are what the church is going to look like in 20 or 30 years,” said the Rev. Christina Mauntel, pastor of the congregation. “We have only one paid staff person. The ladies clean the church, and everyone works together to keep it maintained.  We have very strong laity who know how to lead. They aren’t strongly bound to one denomination or another, but they are committed to each other.”

According to longtime members, the union began when the Episcopal congregation in Valdez fell apart for some reason. The priest at the time approached the Lutheran pastor and talked about joining forces. The conversation carried on with the bishops, who approved a merger in 1979 – 22 years before the Episcopal Church and the Evangelical Lutheran Church in America officially joined in full communion.

The merged congregation used the Episcopal building and paid nominal rent for the first few years; eventually, said Steve Newcomer, president of the congregation’s council, the building was deeded to the Lutherans.

Legally, the congregation is Lutheran. But in every other sense, they are a merged congregation, Newcomer said.

Having a merged church “has never been an issue for any of us who go there,” said Newcomer, who’s been attending Epiphany since he moved to Valdez in 1994. “I’ll be honest: I went to church here for a decade before I knew who was Episcopalian and who was Lutheran. … Our mission is to be a welcome place for all Christians. We try very hard to be accepting of whoever walks in the door.”

This radical hospitality is deeply rooted in the congregations. Both Mauntel and Newcomer recalled a sign in the basement that promoted the church as a place where all are welcome to gather and praise God. Over the years, Episcopal, Methodist, American Baptist, Presbyterian, Disciples of Christ and other denominational groups have all met and worshiped in Epiphany’s building.

“We don’t lock our (church) doors,” said Newcomer. “We want people who seek shelter to be able to use our building. We let any group that’s not out to make a profit use our church. We’re known as the church in town where everyone is welcome.”

Even though she had never stepped foot in Alaska, the ecumenical nature of Epiphany appealed to Mauntel when she considered the congregation as her first call after seminary. A Lutheran pastor, she is finding joy and challenge in learning more about Episcopal traditions and polity.

Priscilla Gregg has lived her whole life in Valdez and attended the Episcopal church as a child and adult. She was part of the Episcopal congregation when it merged with the Lutheran church.

“Initially there were some challenges,” she said. “But we decided early on to come together as a family. Our focus over the years has been that we are not two separate bodies, but we are one body.”

She hopes that other congregations around the country will look at mergers as an opportunity.

“The No. 1 thing is for them to look at where they’re alike, not where they’re different,” said Gregg. “And don’t be afraid. There will be changes, but you can work through them together and come out stronger.”