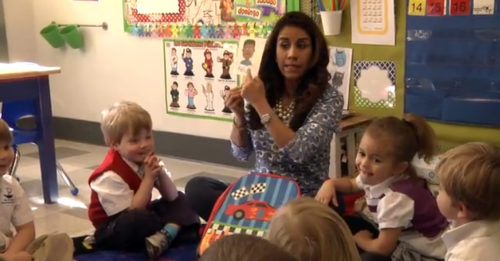 [Episcopal Church in East Tennessee] ¡Hola! (Hello!) 15 kindergarteners call out as a visitor walks into their classroom – as much in unison as kindergarteners can be. The children are having “circle time,” sitting in a circle on a rug with Lead Teacher Betsy Cake.

Cake introduces the visitor, then claps her hands to the rhythm of a song to keep the children’s attention. “Vamos a cantar la cancion de hoy, (Let’s sing today’s song)” she says and she and the children sing “Si usted esta feliz apaluda las fuerte … (If you’re happy, clap your hands).” Then the children say together “¡Me allegro de verte! (I’m glad to see you!)”

This is the kindergarten Spanish-language immersion class at St. Peter’s Episcopal School in Chattanooga, Tennessee.

In 2015, St. Peter’s became the first school in the state to implement a 100-percent Spanish-language immersion program. It is Chattanooga’s first and only elementary school that offers a language immersion track alongside its classic curriculum.

Head of School Meredith Ruffner provides a framework in the school’s mission for why the Spanish-immersion program is important to the school. “Our mission is a love of learning, joy of service and a lively faith. We feel that a global heart and a global mind goes right in with that because we’re wanting to instill in our children a desire to help and serve and interact with people, not just in their community, but all over,” she said.

Ruffner, who became head of school four years ago had a vision for a Spanish-language immersion program at St. Peter’s so a team was formed to look into it.

There were questions about whether Chattanooga was ready for a program like this and whether parents would embrace it, but “the more we talked about it, the more impressed we were with how it fit our mission as an Episcopal school. We just felt it was what our school needed,” Ruffner said.

Sarah Steffner, president of the Board of Trustees at the time, said, “Our team was doing a lot of research and through God and serendipity, a teacher was leaving as Monica Griffin [Spanish-immersion curriculum coordinator] found the school.”

We decided that if we were going to do this, we would need to do it right,” Ruffner said. The team found add.a.lingua, an education consultant company that helps schools implement a second language in the school. Ruffner and Griffin spent several days at the company’s headquarters in Grand Rapids, Michigan, to talk with people at the company and tour schools that were already working with the program. They liked add.a.lingua’s philosophy and comprehensive program. St. Peter’s is now partnering with the company.

Two years ago, St. Peter’s began offering the immersion program to three-year-olds as “kind of an experiment,” a pilot program, to see how it would go. Steffner said, “It was kind of tricky. Between spring and fall the whole thing changed.”

It turned out to be a success all around. After an initial “bump,” students and parents loved it.

“We are fortunate that our board and parent-teacher organization are very supportive of it, but some of the parents initially had qualms about the program,” Ruffner said.

“We found out approximately a month before school started; we had so many questions and fears,” said Brandy Biederman, a St. Peter’s parent. “We had no clue what Spanish immersion was. I was and am very outspoken and immediately asked for meetings to answer our questions. This was our baby girl and we were going to throw her into an unknown setting with unknown people and an unknown language. Had it not have been for Meredith [Ruffner], we wouldn’t have done it. We trust her, always have.” Biederman says she and her husband are now the biggest fans for Spanish immersion at St. Peter’s.

Ruffner said, “There isn’t a large Hispanic population in Chattanooga and the vast majority of students are not connected to Hispanic culture at all – the parents just see the value in learning a second language. We talked a lot with our parents in the community about what the research says about children’s minds, and what is best for them as they grow and develop. Language is at the top of the list.”

The goal is that when the children graduate from fifth grade, they’re completely bilingual – able to read, write, and do math in both English and Spanish. Ruffner said that those skills are transferrable, so whatever skills they’re learning in Spanish, they’re transferring to English.

Ruffner said “About midway through the first year, the school started talking with parents about their thoughts for the next year to see if they wanted to go into our regular junior kindergarten 4-year-old class and everybody was saying, ‘We want immersion.’ This year, that class has moved up to kindergarten. Now we have three full classes.”

Teachers are native Spanish speakers and the children quickly learn the most common things they need to know, such as the names of things in the classroom, words for quieting down, sussuren, and words for if they need to go the bathroom. In class, they have a normal kindergarten curriculum – including learning numbers, letters and songs. Signs hanging in the kindergarten classroom – abrir la puerta (open the door), and ayudar con el bocatillo (help with the snack) – remind students to be polite and to help their teacher and their classmates.

Most parents and siblings speak English at home, but pick up Spanish from the young children in the immersion classes.

Biederman said, “We only speak what we have learned from them. It’s definitely interesting how much we have picked up and don’t realize. Our grocery app is through Amazon’s Alexa and when I pull it up, most of the items are in Spanish because that’s how we say it for her to order it. I didn’t even realize that until now,” she said.

The Rev. Quinn Parman, whose son is in the program, said in a new video, “We love stories – and you can tell as you’re reading that there’s nothing missed. He gets the stories and he understands them. The fact that he knows Spanish and learns English at home does not in any way hamper our ability to do that – in fact, it probably amplifies what he’s doing in school.”

Griffin said, “We have a lot of older siblings in my class. Their parents send me videos all the time about them playing and being on the playground and in the playroom and reading to their younger siblings – it’s adorable to see.”

Biederman said that add.a.lingua and St. Peter’s are very open to meetings and discussions. “I have access to Monica [Griffin], Meredith [Ruffner] and all of the teachers as needed. We have frequent evaluations as well. So parents can ensure that their child’s educational needs and parents’ expectations are supported in the program,” she said.

Biederman voices the hope that other parents also have for their children, “We hope this is a springboard for them to learn even more languages in middle/high school. We also hope this opens up limitless opportunities for their career choices.”

She notes that although some parents prefer the classic curriculum for their children, “We are the biggest fans for Spanish immersion at St. Peter’s,” Biederman said. “As parents, we are constantly looking for ways to give our children every advantage, St. Peter’s provides just that. By the children learning in another language, our hopes are that they will learn to process complex issues with a greater ease. My two children will leave fifth grade bilingual and fluent. That’s a life altering skill that will provide leverage throughout their life,” she said.

“I feel very proud of my son, that he’s learning a new language and that he’s growing in new ways,” said Rachelle Parman said.

Quinn Parman said, “I really hope this gives [my son] a drive to want to connect and make the world a better place.”

– Vikki Myers is communications director for the Diocese of East Tennessee.