[Episcopal News Service] This year, St. Bartholomew’s parishioners posted notes to a “Giving Wall” in the sanctuary, sharing the reasons they give to the Poway, California church. 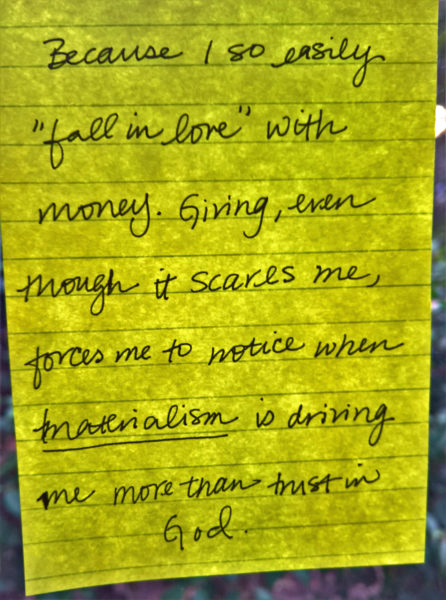 “Because I so easily ‘fall in love’ with money,” wrote one Post-It respondent. “Giving, even though it scares me, forces me to notice when materialism is driving me more than trust in God.”

The invitation to link church members’ money lives to their faith lives transforms the totality of their lives, according to the Rev. Chris Harris, St. Bart’s curate.

The Giving Wall, like the money autobiographies and simple-living classes he offers, are spiritual exercises and are part of the church’s year-round formation efforts – not to be confused with seasonal pledge drives.

The focus and emphasis of traditional stewardship campaigns are changing, according to Richard Felton, executive director of The Episcopal Network for Stewardship, or TENS, which partners with and offers resources to dioceses throughout the Episcopal Church.

The once church-wide dinner galas marking stewardship campaigns have been replaced by smaller potluck meals, and more intimate opportunities for conversation and deeper relationship in members’ homes, according to Felton.

Gone also are pleas for assistance with campus repairs from finance-minded parishioners. Instead, parishioners hear personal stories of transformation, of deepening faith and ministry that, said Harris, when “authentic and vulnerable, end up building community in a way that giving flows from that.”

The new stewardship focus includes stories like the one Joyce Vidal recently told Sunday morning worshippers at St. Barnabas on the Desert about her shift from being a “reluctant churchgoer under the radar” to gratitude for “the opportunity to serve, to grow in faith and in my relationship with God and to experience the healing presence of Jesus.”

After participating in the choir and various ministries, the eight-year member of the Scottsdale, Arizona, congregation said she began to understand that “this community is such an expression of discipleship on so many levels.

“I belong,” Vidal said. “The more I participate at St. Barnabas, the more my gratitude grows.”

“But the church has not done a good job of (communicating the) great value in making disciples of Jesus. That is the church’s mission.”

He said the church’s mission “is not to be a soup kitchen or a food bank. If disciples go out and do all those things, that’s the genius, but the charism, the unique thing the church has to offer the world, is to make people like Jesus. It is worthwhile, perhaps the most important thing any human being can do to support one another.”

Marcia Shetler, executive director of the Richmond, Indiana-based Ecumenical Stewardship Center, said the most successful stewardship happens in churches that offer year-round formation and that practice generosity as a spiritual discipline, as “part of what God calls us to do as Christians.”

At the same time, the ESC director said, a pledge drive is also necessary because “it’s the way to show and to practice what we are planning to do” especially if churches present mission-based budgets detailing how giving impacts various ministries of the church.

ESC offers resources and educational opportunities to 20 North American denominational partners, including the Episcopal Church and TENS, an associate partner.

But a huge challenge is our culture’s reluctance or inability to talk about money, and that often spills over into church life, she said.

Unlike the early church where members pooled financial resources to help one another, “the challenge for us in North America in general is this attitude of secrecy about money, that our finances are a private matter, not really something we should talk about in church,” Shetler said.

And for those heavily in debt, “it becomes a matter almost of shame, and the last thing they want to do is share their finances with their sisters and brothers in Christ, unfortunately, because the church has not always done a good job of creating safe space for them.” 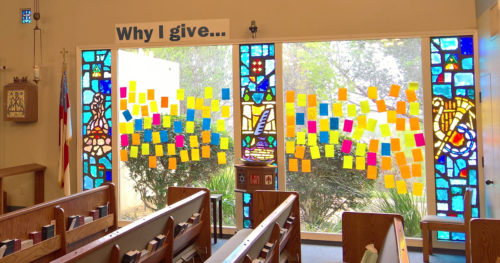 Harris, a former attorney, agreed that money talk is a challenge. “Take a look at social media. We put all kinds of stuff up on Facebook. We share our love lives, our health, if our dog dies, but how often do you see a post where someone says, ‘Anyone know a good bankruptcy attorney? I’m getting worried about my debt.’ ”

And yet, says Harris, 47, most Episcopalians are statistically three paychecks away from having a concern about whether or not they will be able to make their next mortgage or rent payment. “It’s hard to preach about abundance when people are living in that reality,” he said.

“There’s a reason Jesus talked about money as often as he did,” added Harris. “It is a complete disservice in this hyper-consumer culture we live in when we don’t talk about it. If money was one of the major distractions to our relationship to God 2,000 years ago, tell me it’s not a thousand times more so today. Besides sex, it’s the other reason our relationships break up.

Or, he said, if money talk prompts eyes to start rolling and people are hoping we’ll get back to spiritual matters and off this money talk, “pay attention – because that’s ground zero of what Jesus was trying to get us to notice,” Harris said. “That whole notion is false – that I can let Jesus into part of my life but not my lifestyle, not my pocketbook, (because) I don’t want to change that much.”

Often rectors, too, are uncomfortable with money talk – St. Barnabas’ Clark acknowledges he once was.

But he realized that “making disciples is not just about money … it is about the much bigger picture – of my whole life in response to God’s goodness, abundance and generosity to me, God’s grace – and what is my response to that?”

With 455 pledging households, St. Barnabas’ three-pronged financial pledging campaign this year included sharing stories of parishioners’ growth in faith, presenting to the congregation a mission-based budget, and a series of potluck meals in homes to share gratefulness for the church.

“We had conversations. We told stories. We put it on Post-It notes on boards positioned around the campus,” Clark said. “Everybody said it is one of the most meaningful things we’ve done. It changes people’s lives. It’s a mission worth giving to.”

Shetler said another challenge results from churches’ reluctance to adopt acceptable philanthropic practices, such as using legacy programs and endowments. “Many church members make big gifts to their alma maters and to other charities but somehow the church isn’t looked at in the same way,” she said. “And the majority (of churches) do not encourage folks to consider leaving a legacy through their will to the church.”

But she said there is hope – and help. The Lake Institute for Faith and Giving, a research and educational arm of Indiana University, offers assistance and resources for religious fundraising.

TENS’ Felton said perceptions about stewardship have evolved from being a dreaded seasonal task to “teaching and inspiring generosity in all sorts of ways. That is what the church should be about, generosity – not just in money but in how we forgive people and how we welcome strangers.”

The organization’s “Living Generously” stewardship resources offered assistance to member partners for 2016.  An annual conference, “Journey to Generosity,” is planned for May 18-20, 2017 at St. Mark’s Cathedral in Minneapolis.

“Writing my check is an act of prayer for the mission of St. Barnabas,” she said in her remarks to parishioners. “Dropping that check in the basket, seeing it raised and blessed reminds me that God is blessing my gift of gratitude.”