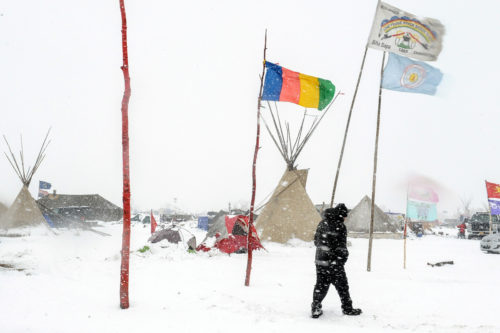 The Oceti Sakowin Camp is seen in a Nov. 28 snowstorm during a protest against plans to pass the Dakota Access pipeline near the Standing Rock Indian Reservation, near Cannon Ball, North Dakota. Photo: REUTERS/Stephanie Keith

Editor’s note: Updated Nov. 29, 2016, at 10 a.m. EST with details about a lawsuit against local law enforcement and about a mandatory evacuation order issued by the North Dakota governor.

[Episcopal News Service] The Episcopal Church’s solidarity with the Standing Rock Sioux Nation remains resolute after nine days of emotional events in the ongoing effort to protect the tribe’s land and water supply.

The latest string of events began Nov. 20 when some of the hundreds of people who tried to remove burned-out vehicles blocking the Backwater Bridge on Highway 1806 on the Standing Rock Sioux Reservation in North Dakota were hit with rubber bullets and doused with fire hoses in sub-freezing temperatures. The bridge had been blockaded since an Oct. 27 confrontation.

Seven students from the Austin, Texas-based Seminary of the Southwest, who were on a pilgrimage to the Standing Rock Reservation, witnessed to the confrontation and wrote about it on social media.

“Here is what we witnessed tonight,” wrote Matt Stone on his Facebook page. “3 water cannons, tear gas, a concussion grenade and rubber bullets fired at nonviolent protectors. This is the most grave injustice I have ever witnessed.”

On Nov. 28, the Water Protector Legal Collective, a National Lawyers Guild group, filed a lawsuit against Morton County Sheriff Kyle Kirchmeier and other law enforcement agencies for using excessive force during that confrontation. The suit asks that the U.S. District Court in Bismarck prevent future use of those tactics.

A few days earlier, on Nov. 25, the U.S. Army Corps of Engineers imposed a Dec. 5 deadline for emptying the Oceti Sakowin Camp. Two days after that, the Corps said it would not forcibly evict water protectors and supporters from the camp on the banks of the Cannonball River.

Then, on Nov. 28, North Dakota Governor Jack Dalrymple announced he was imposing a mandatory evacuation of the camp, citing the harsh winter storm that was blanketing the area with heavy, wet snow. The storm rolled over North Dakota the evening of Nov. 27 and the reservation area could get a foot or more of snow from the storm that is predicted to last through Nov. 30. Daytime temperatures Nov. 28 were just below freezing with winds gusting to 40 mph, making it the first real test of the camps under typical North Dakota winter conditions.

Contacted at his home in Bismarck on Nov. 28, the Rev. John Floberg, supervising priest of the Episcopal churches on the North Dakota side of Standing Rock, told Episcopal News Service that he and other Episcopalians are continuing to provide support to the water protectors.

“My first concern is always for the safety of those who have come to support Standing Rock and the danger that the militarized police presence places them in,” he said.

“The Episcopal Church continues to stand where it has always stood,” Floberg said. “We are in solidarity with the Standing Rock Sioux Tribe as allies who are prayerful, peaceful, nonviolent and lawful.”

Floberg stressed the last quality of lawfulness, citing as an example a protest outside the Corps’ office in Bismarck, the North Dakota capital about an hour north of the reservation. Because the organizers had not obtained the required city permit for the action, “I chose to refrain from involvement,” Floberg said. 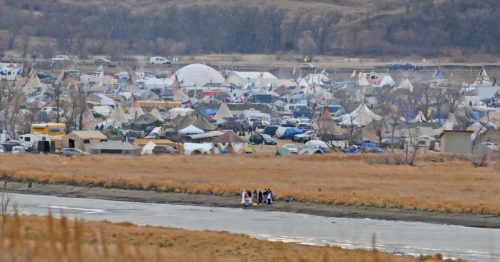 The U.S. Army Corps of Engineers has set Dec. 5 as the deadline for water protectors to leave the Oceti Sakowin Camp. Photo: Bismarck Tribune via Twitter

The Episcopal Church began supporting the protection effort shortly after it began in earnest in August. Executive Council extended that support in October with a request that law-enforcement officials “de-escalate military and police provocation in and near the campsites of peaceful protest and witness of the Dakota Access Pipeline project.”

U.S. Army Corps of Engineers Omaha District Commander Col. John W. Henderson told Standing Rock Sioux Tribal Chairman Dave Archambault II in a Nov. 25 letter that the decision to close the Oceti Sakowin Camp on Dec. 5 was necessary to protect the public from what he called violent confrontations between those at the camp and law enforcement officials “and to prevent death, illness, or serious injury to inhabitants of encampments due to the harsh North Dakota winter conditions.”

Henderson said that emergency, fire, medical, law enforcement and “sustainable facilities” cannot be adequately provided in the areas north of the river.

Henderson accused people in the camp of violating federal regulations by camping on the land, lighting fires, improperly disposing of waste and building unauthorized structures.

He told Archambault that a “free speech zone” had been established south of the Cannonball River inside the Standing Rock Reservation and he asked the chairman to encourage tribal members and their non-Sioux supporters to “immediately and peacefully move to the free speech zone south of the Cannonball River or to a more sustainable location for the winter.”

Henderson’s letter was not publically released, although the Standing Rock Sioux Nation posted it on its Facebook page. 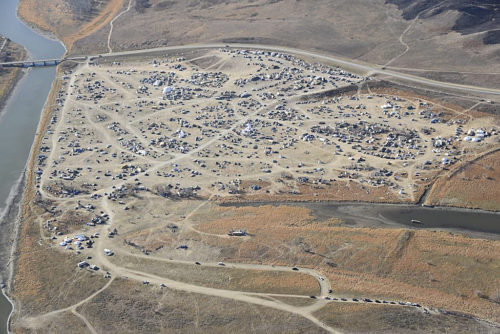 At least four groups of water protectors replied that day saying they would not leave. Noting that the Dec. 5 deadline is the birthday of Gen. George Armstrong Custer, the groups said the Corps does not have the authority to evict them because they were reclaiming land taken from indigenous people.

Two days later in a public statement, the Omaha District office said the Corps had no plans for forcible removal and was “seeking a peaceful and orderly transition to a safer location.” Those who remain after Dec. 5 “will be considered unauthorized and may be subject to citation under federal, state, or local laws,” according to the statement.

“Unfortunately, it is apparent that more dangerous groups have joined this protest and are provoking conflict in spite of the public pleas from tribal leaders,” Henderson said in the statement. “I am very concerned for the safety and well-being of all citizens at these encampments on Corps-managed federal land, and we want to make sure people are in a safe place for the winter. We fully support the rights of all Americans to exercise free speech and peacefully assemble, and we ask that they do it in a way that does not also endanger themselves or others, or infringe on others’ rights.”

The Oceti Sakowin Camp accommodates the overflow from smaller private and permitted protest sites nearby and began growing in August. The Corps said it had not been able to issue a permit for the Oceti Sakowin Camp because it sprang up on Corps land that had been leased to a local rancher. It’s been called the largest gathering of Native American tribes in a century, according to the Associated Press.

Floberg, echoing a statement made by Archambault, said “the move that would be most helpful by the Corps of Engineers is to deny to the pipeline its permit to go under the Missouri River at this point.”

Plans were already afoot to construct a winter camp on reservation land. The Sioux tribal council voted Oct. 19 to invite the campers in the Oceti Sakowin Camp to come to reservation land two miles south of the current location and near St. James’ Episcopal Church in Cannon Ball, North Dakota. Floberg told ENS Nov. 28 that members of the Arikara Nation have been at work on the site. They have broken ground for three earth lodges, he said. St. James’ support and pastoral care of the water protectors will likely increase if that camp, originally planned to accommodate 500 people, does become populated, Floberg has said.

The Corps’ Dec. 5 deadline will come during a Dec. 4-7 planned “deployment” on the reservation by U.S. military veterans as a show of support. More than 2,200 veterans are anticipated. 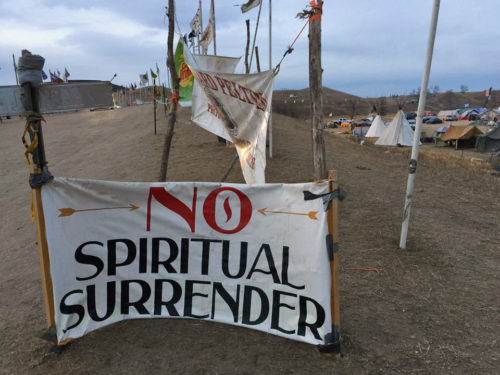 The Standing Rock Sioux Nation asked for chaplains to be present and the Rev. Michael Pipkin, a former Navy chaplain on the Minnesota diocesan staff, is coordinating a response. Twenty-three chaplains have joined the effort as of Nov. 27, including both Christians and Buddhists. Those chaplains, who must have training and experience in trauma care, will be present for the veterans and not as protestors, Pipkin, who was on Standing Rock Nov. 3 for a clergy action, told ENS.

“This time is about making sure the veterans who are there are supported,” he said. “We’re going to be there for them.”

The worry, Pipkin said, was that veterans, who might have experienced trauma in the past, will be converging on a place that has experienced its own kind of trauma.

Trained chaplains who want to join the effort can contact Pipkin at michael.p@episcopalmn.org

Another kind of clergy gathering will take place just before the Corps’ deadline. Chief Arvol Looking Horse, keeper of the white buffalo calf pipe bundle, issued a call for clergy to come to Standing Rock Dec. 4 for what he called an interfaith day of prayer. That call is not connected to the Episcopal Church’s ministry on the reservation, according to Floberg.

Opposition to the Dakota Access Pipeline began this summer and intensified in the fall, attracting unprecedented support from close to 300 indigenous tribes as well as nontribal members and many celebrities. Thousands of people have been camping at various locations along the local waterways, and there have been numerous clashes and arrests with law enforcement.

Media reports said there were as many as 10,000 people in the camp but Floberg said he did not have an exact count. “They were straining the limits of the camp the other day,” he said.

The current pipeline construction route would run just north of the reservation boundary and under the Missouri River at Lake Oahe, which is the Sioux Nation’s water supply, and over its treaty lands and through sacred areas.

In September, federal officials stopped construction of the pipeline on lands bordering and under Lake Oahe that belong to the Corps of Engineers, the federal agency responsible for issuing permits for such construction on public lands and waterways. Construction on that river crossing has been on hold pending further analysis and conversations concerning the project’s potential impact on water quality and damage to sacred tribal sites near the reservation.

The disputed 1,154-mile pipeline will run from the Bakken oil fields in northwest North Dakota to Patoka, Illinois, carrying as much as 570,000 barrels of oil a day. Energy Transfer Partners, the Dallas-based company building the pipeline, says construction will create 8,000 to 12,000 local jobs, while the AFL-CIO has pegged the number at 4,500. The construction company also says the pipeline will provide a “more direct, cost-effective, safer and environmentally responsible” way to transport oil and reduce the current use of rail and truck transportation.