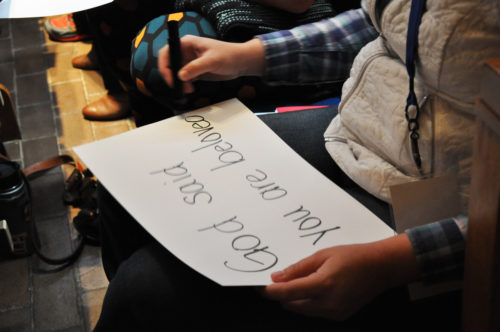 In an exercise on the closing day of Evangelism Matters, conference participants learn about “cardboard testimonials,” writing on one side of their paper about something with which they have struggled and, on the other side, what God has done for them about that struggle. Photo: Mary Frances Schjonberg/Episcopal News Service

While some people might think that an Episcopal evangelist is a rare breed, more than 400 evangelism veterans and fledgling practitioners spent Nov. 18-19 being inspired, finding camaraderie and learning new ways to live up to that slogan during the Evangelism Matters conference at Church of the Transfiguration here.

Evangelism Matters conference participants make their “cardboard testimonials,” first the side of a struggle of theirs (above) and, here, the side of God at work in their struggle. Photo: Mary Frances Schjonberg/Episcopal News Service

The Rev. Emily Schnabl, rector of St. Christopher’s Episcopal Church, Midwest City, Oklahoma, said she was already convinced of the need for evangelism and came to the conference looking for practical ways to bring that idea alive in her parish. She told Episcopal News Service that she left feeling supported in some of what St. Christopher’s is already doing and with some “really achievable things that I’ve literally got in my bag to take back.”

The Episcopal Church is waking up to the need for evangelism, said Ron Braman, an enrolled member of the Eastern Shoshone tribe in Wyoming and music minister at the Episcopal Mission of the Good Shepherd in Fort Hall, Idaho. Braman said he was encouraged by the presence of lay evangelists because too many people assume that the work ought only to be done by the clergy. That expectation is self-destructive, he said, “because if we’re not doing our part, we’re just setting up our leaders to fail.” 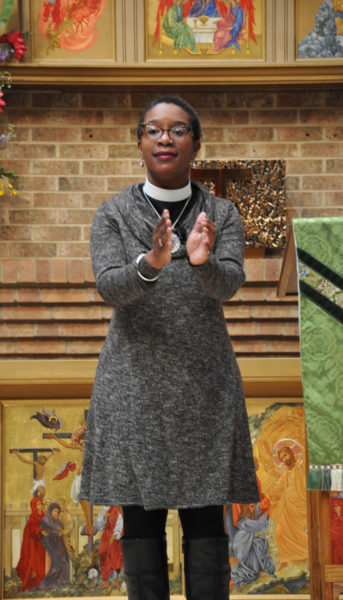 Fighting the oxymoron perception begins with individuals, the Rev. Stephanie Spellers, the presiding bishop’s canon for evangelism and reconciliation, said during the Nov. 19 plenary, asking “why do we need a conference to convince ourselves or to proclaim that evangelism matters?”

“I think you know why,” she answered. “I think we know that, deep down, we’ve been ambivalent” about even the word “evangelism,” much less being evangelists.

When she asked people to shout out why that is so, some of the answers were “fear of rejection,” “fear of looking tacky,” “hurtful things that have been done in the name of evangelism,” “leave it to the clergy,” “people have to be gifted to do evangelism” and “I’m not sure; what is the Good News?”

Evangelism Matters, which quickly sold out its 400 spaces and then made room for 14 more, was co-sponsored by Forward Movement and the Presiding Bishop’s Office, and was hosted by the Diocese of Dallas and Church of the Transfiguration. 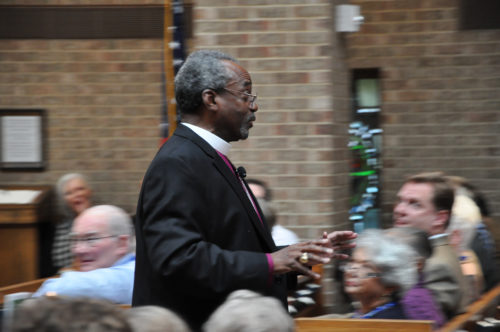 Presiding Bishop Michael Curry was always on the move during his time at the Evangelism Matters conference at Church of the Transfiguration in Dallas, Texas. Photo: Mary Frances Schjonberg/Episcopal News Service

Presiding Bishop Michael Curry, during his keynote address and again during his sermon, both on Nov. 18, set an ambitious agenda, gave a rousing call to action and explicated what Episcopal evangelism is and is not.

It also has nothing to do with cultural or religious imperialism, the presiding bishop said. “This is not about conquering the world for Christ,” he said during his sermon. “It’s about saturating the world with love.”

Maybe, Curry suggested, the Episcopal Church is supposed to tell the world that Christianity’s foundation is the love shown in Jesus. 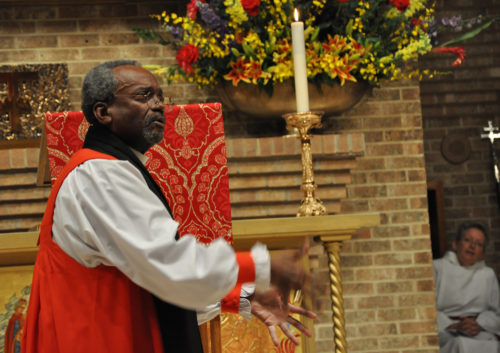 The call to be a Christian is not a call to a cultural imperialism; it is a call to serve the world that is aching to see the Jesus of the Bible, Presiding Bishop Michael Curry said during his Nov. 18 sermon during the Evangelism Matters conference at Church of the Transfiguration in Dallas, Texas. Photo: Mary Frances Schjonberg/Episcopal News Service

And, he said, God is at work in this growing awareness. “I think we’re in one of those cultural moments in which we very well may be participating in God’s re-evangelization of the western world and a re-evangelization via a Christianity that resembles Jesus.”

Curry said “evangelism is about going home and helping each other find the way” and it is about helping people find God and build a relationship with God, who made them for love and longs for them.

“Evangelism matters because God didn’t make us for a nightmare,” he said.

Curry described his dreams for the church. In what he called a fantasized possibility and not a proposed program or an official statement, he asked the conference to imagine what it would be like if the Episcopal Church adopted the model of Doctors Without Borders by marshaling its resources and going anywhere there is a need.

“What if the churchwide budget — General Convention — said to heck with some of this structure, let’s just use this money for evangelism wherever there is a need?” he asked, adding the question of what if dioceses purposefully contributed to evangelism going on anywhere in the church.

Curry asked what would happen if every time a church had to close somewhere and the property sold “some percentage of that money were taken and put in a ‘new generation fund’ to start new churches anywhere in the Church “so that the death of one leads to the resurrection of another?” The audience responded with loud and sustained applause. 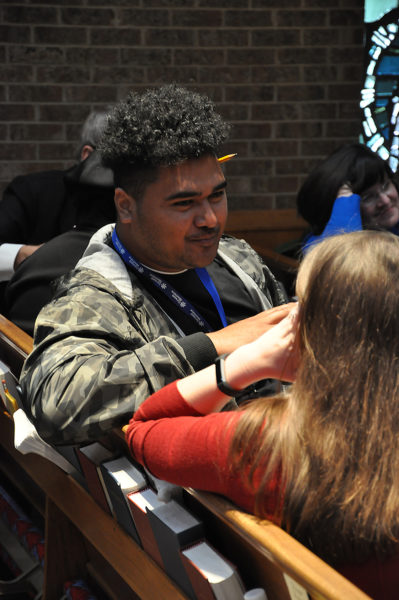 The presiding bishop suggested some other possibilities for anchoring an evangelism ethic in the Episcopal Church. One suggestion was to require people preparing for ordination to get intense training in how to be evangelists just as they are now required to take a unit of clinical pastoral education to learn how to be spiritual caregivers. Another was finding ways to make social media in an authentic and positive way that could turn that media into “the new evangelism superhighway” similar to the way the efficiency of the Roman Empire, especially its highways and its postal system, enabled the swift spread of budding Christianity.

For two of the organizers, the conference was evidence of God at work. “We dreamed of something happening in the church and God did something more than we could have dreamed of,” the Rev. Frank Logue, Diocese of Georgia canon to the ordinary and Executive Council member, said of the size and mood of the conference.

But, he added, the conference has to be a beginning, not an accomplishment. It could be tempting to accept Curry’s self-declared role as “chief evangelism officer” and assume that is all that is needed. 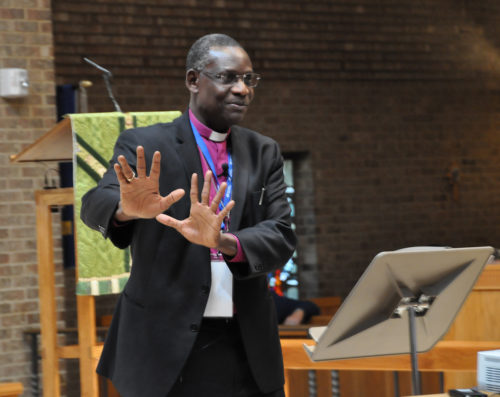 Presiding Bishop Michael Curry invited Anglican Communion Secretary General Josiah Idowu-Fearon to attend Evangelism Matters. Fearon spoke to the conference, praising it for “re-evangelizing this part of the Anglican Communion.” During a later press conference, he said that rest of Communion needs to know that the Episcopal Church talks not just about human sexuality; it talks about evangelism, too, and that it is setting an example of attempting to live together amid difference, contextualizing gospel. Photo: Mary Frances Schjonberg/Episcopal News Service

“If we want to rely on our presiding bishop alone, as talented as he is, we will have made him into an idol and it would be better to ask him to step down,” he said. Instead, as Anglican Communion Secretary General Josiah Idowu-Fearon suggested during short remarks to the conference, if Episcopalians become chief evangelism officers in their diocese, their congregations and in their families, “then we will have really joined the movement.”

The Rev. Susan Snook, another Executive Council member and founding rector of Church of the Nativity in Scottsdale, Arizona, said when she sponsored Resolution D005 at General Convention in 2015 to set up a church-planting network and when Logue convinced that same meeting of convention to add $2.8 million to the 2016-2018 budget for evangelism work, “we thought we were pushing at a closed door.”

“Or maybe we’d crack it open a little bit and, oh my gosh, we have found that the spirit has blown that door wide open. We are ready for something new in the church.”

She told ENS she would like to see Episcopalians connect with the people from their diocese who attended the conference and who can show them how to spread the good news of Christ through their communities.

Snook, a veteran evangelist and church planter, said she found renewal and refinement of her ministry at the conference. She went to the “Elevator Evangelism” workshop, run by the Rev. Casey Shobe, Transfiguration’s rector, and learned how to hone the story of why she follows Jesus down to one minute. “I got in touch with a way of speaking about it that I hadn’t done before,” she said.

Participants had their choice of 25 workshops offered during three time slots. Among the workshop titles were “Talking God Today,” “Compassionate Evangelism: A Non-Judgmental Approach to Sharing Your Faith,” “Social Media, Evangelism and Connecting with Emerging Cultures,” and “How To Make a Rocking Welcome Video on a Dime.” Many of the workshops offered handouts to participants and most of those can be found here.

Parts of the conference were streamed live and at one point more than 1,000 computers had connected to the broadcast. Those streamed events are now available for on-demand viewing here. (In each viewer labeled “Church” and “Performance Hall” click on the icon in the upper right corner to find individual sessions.)

Logue summarized the conference during its closing session. That summary is here.

Prior to the Evangelism Matters conference, leaders of new church plants or mission initiatives met Nov. 16-17 in the inaugural Genesis Gathering of the Episcopal Church at the Church of the Ascension, also in Dallas. The conference’s goal was to help establish a community of practice among such leaders in which they could encourage each other and learn from each other. The Episcopal Church’s Genesis Group (formally known as the Advisory Group on Church Planting) sponsored the event.

A third gathering, an invitation-only meeting called “the summit,” gathered some participants of each of the other meetings before and after Evangelism Matters to discuss the current and hoped-for future state of evangelism in the Episcopal Church, and what resources are needed.