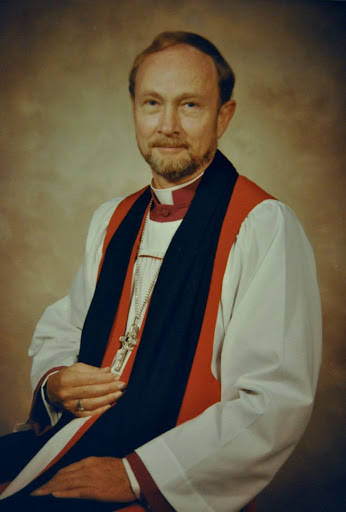 [Diocese of Georgia] The Diocese of Georgia mourns the death of the Rt. Rev. Harry Woolston Shipps, the eighth bishop of Georgia (1983-1994). He died the morning of Nov. 17 with his beloved wife, Louise, by his side. A Requiem Eucharist for Shipps will be held at the Collegiate Church of St. Paul the Apostle in Savannah, Georgia, on Nov. 22  at 11 a.m.

The Rt. Rev. Scott Anson Benhase, the 10th bishop of Georgia, said of Shipps: “He was a man of great character and purpose, always ready to listen and offer good counsel. He was enormously helpful to me as one who had sat in the chair I now occupy. I could always count on him to give me perspective and needed humor on the Office of Bishop. He was a great leader of this diocese because he loved God’s people so much. He was quite simply and humbly, a disciple of Jesus.”

Born on Jan. 28, 1926, in Bordentown, New Jersey,  Shipps attended Bordentown High School, Bordentown Military Institute, and the New York State Maritime Academy. On Jan. 9, 1946, he was commissioned as an officer in the U.S. Navy and the U.S. Maritime Service. He sailed on a troop ship, then with Grace Line Steamship Company, until called to active duty in the Navy during the Korean War. He was assigned to a Naval facility in Savannah, then to shipboard duty in the North Atlantic. He married the former Louise Huntington in 1953.

Following his discharge from active duty, he attended the School of Theology, University of the South, as a postulant sponsored by the Collegiate Church of St. Paul the Apostle in Savannah. Ordained a deacon in 1958 and a priest in January 1959 by Bishop Albert Rhett Stuart, he was first assigned by Stuart as vicar of St. Mark’s Church in Albany. Later, he served parishes in Savannah and Augusta. Prior to his election as bishop, he served the diocese as diocesan secretary, editor of the diocesan newspaper, member of Diocesan Council, president of the Standing Committee, and as a deputy to three General Conventions. He was rector of St. Alban’s, Augusta and the dean of the Augusta Convocation when he was elected bishop coadjutor on Sept. 15, 1983, and consecrated on Jan. 6, 1984. He became the diocesan bishop in 1985 upon the retirement of Bishop Paul Reeves.

Initially opposed to the ordination of women to the priesthood, primarily on the grounds that it would impair ecumenical relations with the Roman Catholic Church, Shipps early in his episcopate instituted a listening process to hear the diverse diocesan positions on the ordination of women, which the Episcopal Church permitted after its 1976 General Convention. Marking a change in his previous position, he initiated a process leading to women’s ordination in the diocese. Susan Harrison of Savannah was ordained to the diaconate in September 1985. Sonia Sullivan of Valdosta was later accepted as a postulant for the priesthood and ordained.

Shipps and fellow ecumenist, the Most Rev. Raymond W. Lessard, Roman Catholic bishop of Savannah, held several joint clergy conferences with noted speakers from both churches. This led to a covenant between the two dioceses calling for a number of mutual ministries and responsibilities.

During Shipps’ tenure as diocesan bishop, the Diocese of Georgia made headlines when a former Assembly of God minister, Stan White, led his entire congregation to join the Episcopal Church becoming the congregation of Christ the King in Valdosta.

In 1994 the diocese reported 17,197 baptized persons. Shipps’ reported in his convention address that year that the diocese had the second highest average Sunday attendance (relative to its baptized membership) of all the dioceses in the U.S. and that its stewardship average per household was also second highest in the Church.

After his retirement as bishop of Georgia in 1995, Shipps served as assistant bishop of the Diocese of Dallas for four years.

Gifts in memory of Shipps should be made out to the Diocese of Georgia.