In his keynote address, titled “The Jesus Movement: Embracing the Call,” Curry repeatedly told participants that the Jesus Movement is not a “Michael Curry concoction” that will have a limited shelf life.

“It is a solemn call to reclaim our deepest origins – the deepest roots of who we are – and to thereby know how to be oriented in a time of profound disorientation,” he said. “We’re taking the long perspective and we’re going deep.”

The Jesus Movement, Curry said, is about evangelism and reconciliation, and more.

“It’s the work of redeeming this creation. It’s the work of helping justice to roll down like a mighty stream,” he said. “This Jesus Movement – following the word of Jesus – will set this world free; set us all free. I didn’t make that up; it’s in the Bible. And, for the Episcopal Church to reclaim that is to reclaim who we are. That, my friends, is a game changer.”

But, he said, the basic technique of the movement is simple and he is living proof. “I’m here because somebody showed me Jesus,” Curry said, telling the story of how he came to understand Jesus anew during college when a friend’s overdose caused him to recall how his grandmother faith had sustained her through grief and loss.

The Rev. Benjamin Twinamaani, rector of Grace Episcopal Church, a 23-year-old parish in Tampa, Florida, would agree about being shown Jesus. He met Jesus through a Christian group of high school students in his native Uganda.

Twinamaani, whose name means “together we have strength,” said in an interview with Episcopal News Service that in Uganda “evangelism is a given” and it is mainly lay-led. The role of clergy is that of trainer. “You equip the people and they go out and do it,” he said.

At Grace, lay people who work within their own demographic segment of the community but who look outside of their group, as well, lead evangelism. For instance, the Episcopal Church Women group decided on its own to start feeding homeless people in the neighborhood. “I didn’t tell them to,” he said.

In fact, Twinamaani said, clergy can get in the way sometimes and be a bottleneck. The Episcopal Church is a very clerical institution, he said, but “I have seen the other side where lay people drive the church and it’s much more vibrant.”

Twinamaani said people also have to realize that, as Curry told the conference, working for the Jesus Movement means being in it for the long haul and not expecting things to change overnight. He cited other efforts such as Cursillo that work slowly but last long.

And, for the Rev. Lewis Powell, a deacon in the Diocese of Northern California, getting ready for the long haul is about building relationships because, he said, that is how the Jesus Movement must begin. “You have to enter into a relationship in order to serve someone,” he told ENS in an interview. 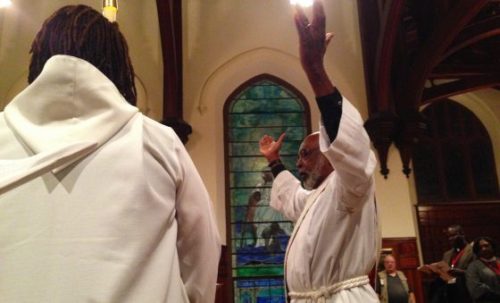 Powell said he thinks of his diaconal ministry as being the person who fills in the potholes along the path that runs back and forth between the church and the world, “trying to make life smoother” and fostering relationships along the way.

“Once that relationship has been established, we can move on to fill another pothole together,” said Powell, who serves as the indigenous ministries missioner for Northern California.

During his visits with the water protectors on the Standing Rock Sioux Nation, Powell said he learned that people must be in relationship with the past and the future, as well as to be in peaceful relationships with people in the present.

The rest of the conference

The conference runs Nov. 16-19 at the Magnolia Hotel in downtown Houston,

The Nov. 17 session, whose theme is “The Jesus Movement: Embracing the Word, will center on the New Visions movement models of ministry for congregational renewal and vitality, clergy/lay mutual ministry and clergy leadership. The Nov. 18 sessions focused on “The Jesus Movement: Beyond conversations on race, violence, repentance and reconciliation.”

During that evening’s banquet the church’s black bishops will be honored. Those present will be given 11×17 framed copies of a newly revised black bishops poster, and an accompanying book. Those items will be mailed to bishops not in Houston. The conference will also pay tribute to the ministry the Rev. Angela Ifill, who retires this month as Episcopal Church missioner for the office of black ministries, a position she has held since 2000.

Curry praised Ifill’s work during his Nov. 16 keynote address, saying that she has served “faithfully, nobly and well.”

On Nov. 19, participants will finalize and share their action plans for going forward. The conference plans to issue a statement to the wider church.

In addition to priests and deacons from across the Episcopal Church, conference participants came from elsewhere in the Anglican Communion, including the Province of the West Indies and the Church of England, as well as Sudanese clergy.