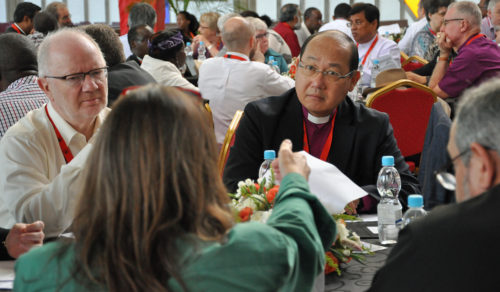 As a native of Hong Kong, Kwong’s faith has been built on both Western and Chinese roots, and his education deepened and enriched that dual heritage: he was educated at Lingnan College in Hong Kong, received an M.Div. from the Church Divinity School of the Pacific in 1982, and a Ph.D. from the University of Birmingham, England in 2008. He has also received several Honorary Doctorates and Fellowships from overseas and local Academic Institutions. Kwong has had very rich and diverse pastoral experiences, including planting two new missions after serving as curate for four years at Holy Trinity Church (Cathedral) and as vicar of St. Matthias Church for 10 years. He was chaplain to St. John’s Cathedral with special responsibility for the Mandarin speaking congregation. He served as an assistant to Archbishop Peter Kwong before being appointed as the provincial Secretary General.

Hong Kong became a Special Administrative Region (SAR) of the People’s Republic of China in 1997 and a year later the Hong Kong Sheng Kung Hui became the newest autonomous member church of the Anglican Communion. In January 2007, Kwong became bishop of the Diocese of Hong Kong Island, and a few weeks later was elected as the Church’s second archbishop, bringing his pastoral skill and wisdom to the oversight of a network of parishes and missions in three dioceses and one missionary district, more than 140 kindergartens, primary and secondary schools, and a vast network of social service programs.

“Virginia Theological Seminary is excited about deepening the connections between the Seminary and this vitally important province in the Anglican Communion,” Markham said. “Archbishop Kwong is a compassionate pastor, a wise administrator, a prophetic voice, and a strong advocate for reconciliation and mutual respect.”

Established in 2008, the Dean’s Cross Award recognizes outstanding leaders who embody their baptismal vows to “strive for justice and peace among all people and respect the dignity of every human being.” Selected annually by VTS’ dean in consultation with the chair of the Board of Trustees, the honorees receive a handmade silver cross, modeled after the seminary chapel cross, and a certificate.

On Jan. 6, 2017, Kwong will be recognized alongside other distinguished servant leaders during the service of Festival of Lights at Virginia Theological Seminary.