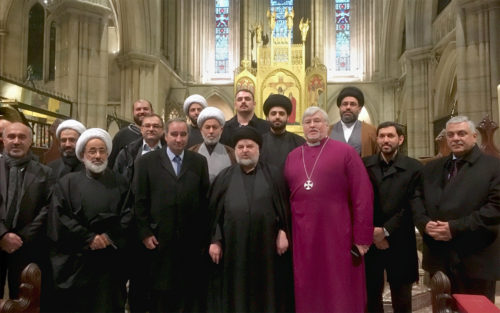 Whalon also invited Bishop Michel Dubost, interreligious officer for the [Roman Catholic] Bishops’ Conference of France, and Pastor François Clavairoly, president of the Protestant Federation of France. The new Ambassador of Iraq, His Excellency Haidar Nasir, was also in attendance, as well as a delegation from the Al-Khoei Foundation.

The visit built on foundations laid by Whalon as an early promoter and participant of the Christian-Muslim summits. During the first summit, he met and befriended Ayatollah Ahmad Iravani, head of the Shi’a delegation. This led to a friendship with the leader of the Al-Khoei Foundation in Paris, Sheikh Ismael Al Khalik. Most recently, Whalon facilitated an invitation for Shi’a and Sunni imams from Paris to attend the funeral of the murdered Roman Catholic priest, Father Jacques Hamel, as guests of the Archdiocese of Rouen on Aug. 2, along with himself as the Episcopal (Anglican) Bishop in Europe.

The conversation with Shahrastani concerned issues of Christian-Muslim relations in the Middle East and Europe. In the aftermath of the U.S. presidential election, the Muslim attendees expressed hope that it would not have adverse effects on American Muslims. Whalon replied that the Episcopal Church would do all in its power to prevent persecution of Muslims in America. He also reminded the group that he had asked the Convocation of Episcopal Churches in Europe to pray for Ayatollah Sistani, as he has undertaken the difficult and dangerous task of working for peace between Christians and Muslims, and indeed, among Muslims themselves.

As the meeting ended, Shahrastani invited both Clavairoly and Whalon to Iran. Whalon replied that he had already accepted the invitation of the Chaldean Archbishop of Teheran, Ramzi Garmou, to visit Iran once again in January, but both men agreed they would try to go together and accept the hospitality of Shahrastani as well. A possible visit to the holy cities of Qom and Najaf was also discussed.

After the meeting, members of the Al-Khoei Foundation offered a meal to Whalon and his guests. Finally, they shared their Iranian and Afghan delicacies with the women of the cathedral, who were setting up their annual Christmas bazaar.