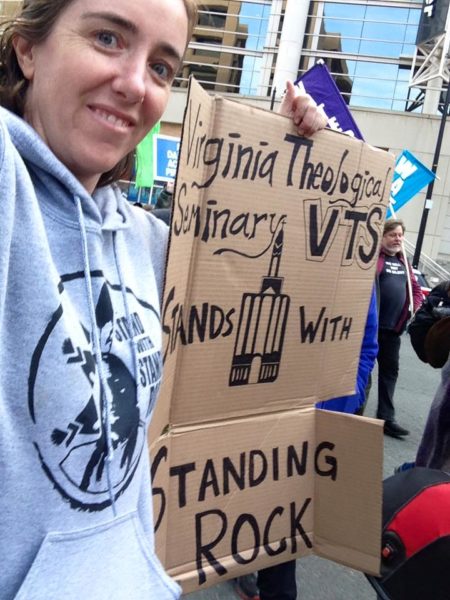 Robin Denney, a seminarian at Virginia Theological Seminary, marched in peaceful, lawful solidarity among thousands of people Dec. 15 from the Army Corps of Engineers Office to the White House in Washington, D.C. #NoDAPL marches took place across the country. Photo: Facebook

[Episcopal News Service] On Nov. 15, protesters took to the streets to call on President Obama to stop construction on the controversial North Dakota Access pipeline. On the same day, Energy Transfer Partners filed a lawsuit asking for federal court intervention to finish the pipeline project.

The #NoDAPL Day of Action came one day after the federal government said final approval for a federal permit that would allow construction to continue on the Dakota Access Pipeline remains on hold pending further analysis and conversations concerning the project’s potential impact on water quality and damage to sacred tribal sites near the Standing Rock Sioux Nation’s reservation in North Dakota.

In a statement posted Nov. 14 on the U.S. Army Corps of Engineers website, the Army said it had completed the review it launched on Sept. 9, when it requested construction stop on the 1,172-mile 30-inch diameter pipeline poised to carry 570,000 gallons of oil a day from the Bakken oil field in northwestern North Dakota – through South Dakota and Iowa – to Illinois where it will be shipped to refineries.

“The Army has determined that additional discussion and analysis are warranted in light of the history of the Great Sioux Nation’s dispossessions of lands, the importance of Lake Oahe to the tribe, our government-to-government relationship, and the statute governing easements through government property,” said the Army in its statement.

In September, federal officials stopped construction of the pipeline on lands bordering and under Lake Oahe belonging to the Corps of Engineers, the federal agency responsible for permitting on public lands and waterways.

Yesterday’s action, “reinforces that earlier language and it sounds like they are trying to work with the tribal council and its chairman to find a way to say we are now satisfied with the project and its safeguards … to give greater assurance that nothing catastrophic could happen,” said the Rev. John Floberg, supervising priest of the Episcopal churches on the North Dakota side of Standing Rock, in an interview with Episcopal News Service.

In a statement, Standing Rock Sioux Tribal Chairman Dave Archambault II said the decision fell short of what he hoped for, but indicated that Obama was listening.

“We are encouraged and know that the peaceful prayer and demonstration at Standing Rock have powerfully brought to light the unjust narrative suffered by tribal nations and Native Americans across the country,” said Archambault. “Not all of our prayers were answered, but this time they were heard.”

For months native and non-native “water protectors,” opponents of the pipeline, have been camped on federal lands near the proposed construction site. On Nov. 3, more than 500 people, clergy and laity representing 20 faith traditions travelled to stand in peaceful, prayerful solidarity and witness with the Standing Rock Sioux and their allies.

The Standing Rock Sioux argue the pipeline would cross treaty lands, disturb sacred areas and threaten drinking water for 8,000 members who live on the tribe’s nearly 2.3 million-acre reservation, located just south of where the pipeline would cross under the Missouri River at Lake Oahe. The lake is the reservation’s drinking-water source. The sacred sites fall outside the reservation’s boundaries, but the tribe argues they were part of an 1851 land treaty.

Following the federal government’s request to stop construction in September, Texas-based Energy Partners, the company building the pipeline, purchased private lands near the proposed route and continues construction on the pipeline. Some say the purchased land belongs to the Sioux Nation.

– Lynette Wilson is a reporter/editor for Episcopal News Service.