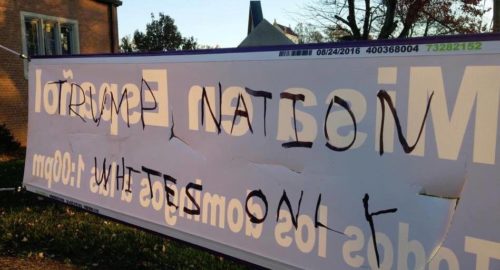 Vandals used a black magic marker to write “Trump Nation Whites Only” on the back of a sign advertising the weekly Spanish-language mass at Church of Our Saviour in Silver Spring, Maryland. The hate speech was discoved early on the morning of Nov. 13. Photo: Facebook

[Episcopal News Service] Episcopalians in Indiana and Maryland awoke Sunday morning to hate messages scrawled on their churches’ properties. But rather than despair, they responded with a message of love and welcome.

“I was disheartened at first to see the words on the wall but my second reaction was we must be doing something right,” said the Rev. Kelsey Hutto, priest-in-charge, of St. David’s Episcopal Church in Bean Blossom, Indiana, a small community of fewer than 3,000 people some 50 miles south of Indianapolis.

“I’ve been using Presiding Bishop Curry’s statement that ‘sometimes doing the right thing is not always the popular thing,’ and we are living into that, and proud of that, and we believe that facing hate with love is the right way to go about our call as Christians.”

On Nov. 13, upon arriving at St. David’s, the church organist discovered the words “Heil Trump” and “Fag Church” and a swastika spray-painted in black on the church’s gray-brick exterior walls.

At first, the congregation – very active in the community through service and outreach – was heartbroken at the vandalism, said Hutto, in a Nov. 14 telephone interview with Episcopal News Service.

“But as the service went on and the day went on, they turned from being hurt, not to vengeance … but they knew they had to react with love,” she said.

St. David’s serves people from five communities in Brown County, Indiana, focusing its outreach on addressing hunger and the needs in a county where 97 percent of its 15,000 residents are white. 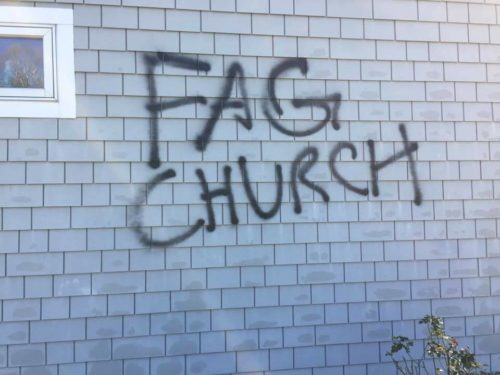 When the organist discovered the graffiti, he called Hutto, who immediately called the Sheriff’s Department, which sent out a deputy. Hutto said she plans to leave the graffiti on the church’s walls until the end of November. 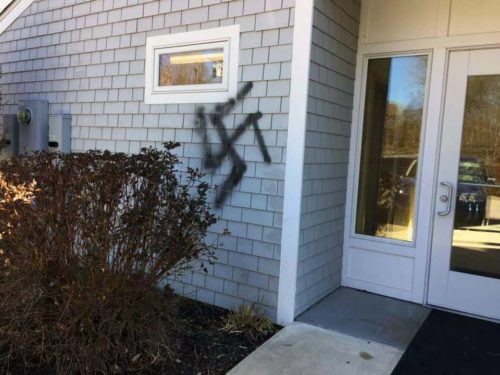 A swastika, originally a symbol of good fortune, was first co-opted by the Nazis as an anti-Semitic symbol and later by white nationalists in the United States. Vandals spray-painted the symbol near an entrance to St. David’s Episcopal Church in Bean Blossom, Indiana. Photo: Facebook

They are just symbols; you can look at them and see hate, or be angry and hurt, or you could look at them as a symbol of hope, she said. “Just because they have defaced the outside doesn’t mean they affected the inside, and it doesn’t change our call as Christians to love each other as Christ loves us.

“The main thing is that we welcome all people, no matter what color you are or where you are from or who you love … love conquers all hate.”

And that welcome extends to the perpetrators of the act, said Hutto.

Indianapolis Bishop Catherine Waynick, in a message posted on the diocese’s website, said that while it is “deeply disturbing to be on the receiving end of such vitriol, it is also an opportunity to be very clear, with ourselves and the world around us, that we take seriously the commandment of our Lord to love one another with the same love God lavishes on every person – no exceptions.”

“We do not know who is responsible for the vandalism. What we do know is that the kind of language used during the recent presidential campaign has emboldened some people to become openly abusive and insulting. Our option as faithful people is to be sure we don’t respond in kind,” she said. “The Episcopal Church will continue to welcome all people, to seek and serve Christ in the world around us, to strive for justice and peace among all people, and to respect the dignity of every human being – even those who deface our buildings. Our buildings can be marred by anger and hatred – we will not allow our hearts to be defiled.

“Our hearts and our doors remain open to everyone, as we pray for the wisdom and courage to remain faithful disciples of Jesus.”

Since the Nov. 8 election of Donald J. Trump, increased incidences of hate crimes, anti-Semitic, homophobic and racist graffiti referencing the president-elect’s campaign rhetoric and policy proposals have been seen across the United States. In some cases, Trump supporters have substituted the words “Make America White Again” for his campaign slogan, “Make America Great Again.”

As of Friday, Nov. 11, the Southern Poverty Law Center had received 201 incident reports of election-related harassment and intimidation nationwide.

At the same time, thousands of protestors have taken to the streets in at least 52 cities across the country chanting slogans like “not my president,” and carrying signs reading “love trumps hate,” “dump trump” and “the future is nasty.” The latter is in reference to a comment Trump made about Hillary Clinton during the last presidential debate when he referred to her as “a nasty woman,” a slight that has since been adopted as a slogan by women nationwide.

On Nov. 14, Presiding Bishop Michael Curry issued a statement calling on Episcopalians to affirm their identity as followers of Jesus.

“Last week I shared what I pray was a reconciling post-election message to our church, reminding us that ‘we will all live together as fellow Americans, as citizens.’ Today I want to remind us that during moments of transition, during moments of tension, it is important to affirm our core identity and values as followers of Jesus in the Episcopal Anglican way,” said Curry. 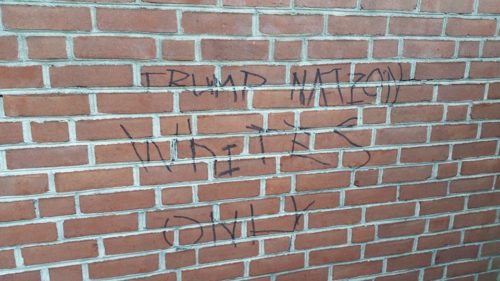 Vandals wrote “Trump Nation Whites Only” on the red-brick wall in Church of Our Saviour’s memorial garden. Photo: Facebook

The Rev. Robert Harvey, Church of Our Saviour’s rector, first noticed the words “Trump Nation Whites Only” written on a wall in the parish’s memorial garden on his way in to his church in the Hillendale section of Silver Spring, Maryland, for the 8 a.m. Eucharist. Once inside, as he went to check the mail, he saw that canvas banner advertising the church’s weekly Spanish-language mass had been slashed and vandalized with the same message.

First Harvey called the police; then he sent an email message to the Rt. Rev. Mariann Budde, bishop of the Diocese of Washington, who called Harvey and told him she’d be at the 1 p.m. Spanish-language mass. On most Sundays, 100 people attend the Spanish-language mass at Church of Our Savior, but after news of the vandalism spread on social media and in the community, between 250 and 300 people came to worship and show support for the church. 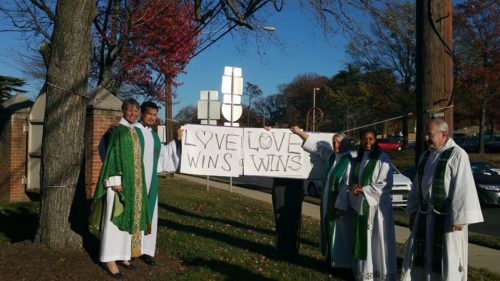 Washington Bishop Mariann Budde and the Rev. Francisco Valle, assistant priest and leader of the Spanish-language Mass at Church of Our Saviour in Silver Spring, Maryland, left, hold a sign that reads “Love Wins” following an incident of racist vandalism at the church over the weekend. The Rev. Robert Harvey, the church’s rector, on the right, in the foreground, and others join them. Photo: Facebook

“Bishop Mariann and I are sending a consistent message, what we are asking of Donald Trump is that he come out from behind his constituency and denounce these terrible things that are happening in his name,” said Harvey in a Nov. 14 telephone interview with ENS.

In an interview with Lesley Stahl, Trump looked into the camera and asked supporters committing hateful, violent acts in his name to “stop it.”

In response to the vandalism at Church of Our Savior, many people posted messages of love and compassion on the Diocese of Washington’s Facebook page and asked what they could do to assist the church, while others suggested the vandal could just as easily be someone who is anti-Trump “to stir people up.” Another asked, “Could it have been the liberals that are rioting all across the country?”

Located just north of Washington, D.C., Silver Spring is a suburb of the nation’s capital and home to more than 70,000 people. The Episcopal Diocese of Washington extends into the suburbs.

Church of Our Savior, Harvey said, serves a multicultural congregation with members from more than 50 countries, African-Americans and people from the African diaspora and Central and South Americans. Hillendale itself, he said, is 48 percent Latino. 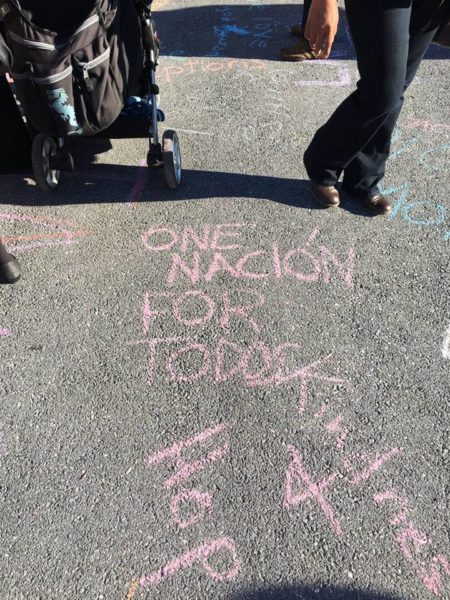 Following the Nov.13 Spanish-language mass at Church of Our Saviour, attendees used chalk to write messages of love, peace and welcome on sidewalks and the street outside the church. Here the message written in pink chalk reads “One Nación For Todos” or “One Nation For All” in Spanish and English. Photo: Facebook

Members and supporters received colored chalk as they exited the Spanish-language mass; they wrote messages of welcome, peace and love on the sidewalk and in the street in front of the church. At the same time, the leadership addressed the media.

“Hate speech has covered the signs of this church and we stand here to say that we are firm in our rejection of such violence and that we are a nation of immigrants and of people of all cultures and faiths and that there is no place for such violence in our land,” said Budde, in a press conference held Nov. 13 outside the church following the 1 p.m. mass. “And I would call especially upon the president-elect and those who voted for him to separate themselves from acts of violence and hate that are being perpetrated in his name.”

“We believe that the majority of Americans want a nation of peace and of unity across the spectrum of our glorious people, and we do not want our friends of color and our immigrants and other people who feel vulnerable to imagine that this is who we are as a nation,” Budde continued.

“And we are here and we will always be here whenever such acts are perpetrated. And I also want to plead with our young people who are hurting now and all those who are hurting now, if you protest, protest with confidence and love, but do not stoop to this kind of violence. We are better than this as a country and we will overcome hatred with love and peace and justice.”