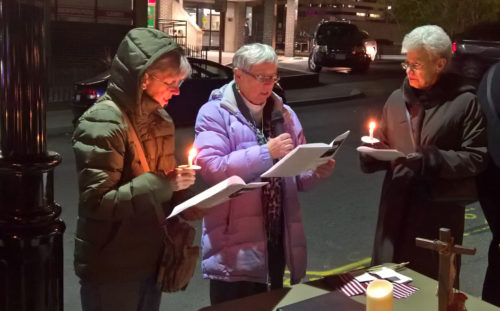 [Episcopal News Service] In the hours leading up to the Nov. 8 general election and all during Election Day and evening, Episcopalians across the United States are voting and praying and welcoming fellow voters into their churches.

Many congregations held vigil services on Nov. 7 and many are hosting services on Nov. 8 with still more planned for Nov. 9. Still other congregations have left open their doors and invited their neighbors into their prayerful spaces. And some Episcopal churches serve as official polling places and have been welcoming their neighbors into their buildings. 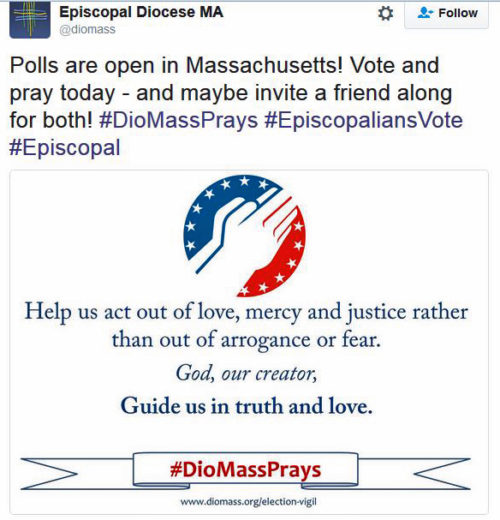 Meanwhile, Episcopalians and their congregations and dioceses were tweeting photos and encouragements to vote using the hashtag #EpiscopaliansVote.

The service at St. John’s was one of many in response to the call of the bishops of Massachusetts and Western Massachusetts for 48 hours of prayer from noon on All Saints Sunday through noon on Election Day. About 30 people came to the service at St. John’s that was held jointly with First Church of Christ, the United Church of Christ congregation across the street in Sandwich.

“This is what folks are thinking about,” the Rev. Tom Ferguson, St. John’s rector, said of the election. “I think the church needs to be in conversation with what the world and our parishioners are dealing with. If we’re not talking about the things that they’re talking about and how you make sense of that in this world, then what are we here for?”

Ferguson also officiated at election eve prayers services in 2004, 2008 and 2012. For some of those he was a college chaplain, during others he was a seminary dean, but during each one the goal was the same. “This was not about advocacy or any particular candidate,” he told Episcopal News Service. “It was praying for the nation. It was praying for our future. It was praying about being engaged in our society and in our world.” 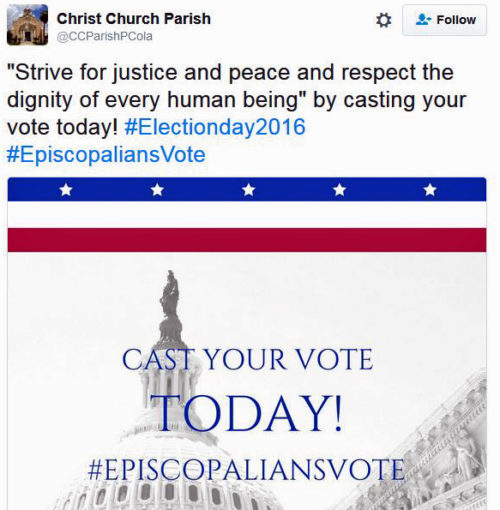 “It’s a much more productive thing than I would otherwise be doing, which is refreshing FiveThirtyEight,” she said, referring to the website of data analyst Nate Silver that is an online destination for the politically obsessed. “It feels centering to be here. This is a place that was here before the election and will be here after the election.”

In the Diocese of Western Massachusetts, the 48 hours of prayer included vigils the evening of Nov. 7 outside Christ Church Cathedral in Springfield and outside City Hall in Worcester. About 25 people came out in the chilly air for each service.

“We would always hope for more people but at the end of the day the people that were there were all just trying to seek God’s voice in this whole process,” said the Rev. Terry Hurlbut, deacon at All Saints Episcopal Church in South Hadley, who help organize the two vigils.

Hurlbut said the participants were welcomed to the services with an invitation to join together to seek common ground.

“What we talked about was how we all have the same vision. We all want peace. We all want a place where we can all be safe and worship and live in harmony but, there’s so many choices that we can make about how to get there,” he said. “We all have that same objective. We might take different road but, let’s pray for the ultimate objective.” 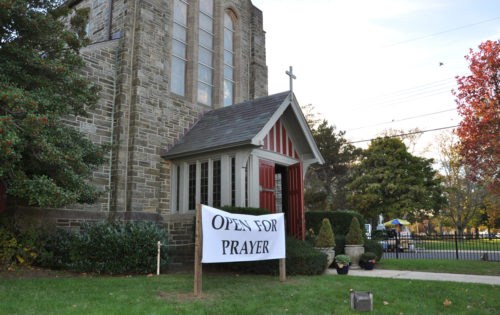 St. James’ Episcopal Church in Long Branch, New Jersey, was open on Nov. 8 for prayer. The Rev. Bill Noble, interim rector, said he decided to invite voters in because he sensed that people needed a space to match the “secret, sacred and secluded” feeling they have when they vote. Also, he said, he thinks people are learning about the importance of sacred space and a space for frightened souls. Photo: Mary Frances Schjonberg/ Episcopal News Service

As people in Washington, D.C., await the outcome of Tuesday’s election and the normally peaceful transfer of power in January, people coming to St. Columba’s prayer service in the northwestern part of the district were worried. “I’m just really concerned about the backlash and the aftermath,” one participant told a reporter for the local NBC affiliate, adding that she is praying for peace.

Meanwhile, voters in the neighborhood around St. Margaret’s Episcopal Church across the river from downtown Annapolis, Maryland, on Nov. 8 were streaming into the church’s formation building to vote at their local polling place. The church has served as a polling place for years, according to the Rev. Peter Mayer.

Four years ago, voters had to wait outside in the cold for an open voting booth. Parishioners tried to help folks keep warm by serving coffee and other hot drinks, Mayer recalled. Director of Music James Fitzpatrick rolled a piano outside and played patriotic hymns.

“It gave volunteers from the church a way to interact with the community in a non-evangelical way, so that essentially what we were doing was being hospitable neighbors,” Mayer said. “And we attracted some people that way, which was wonderful.” 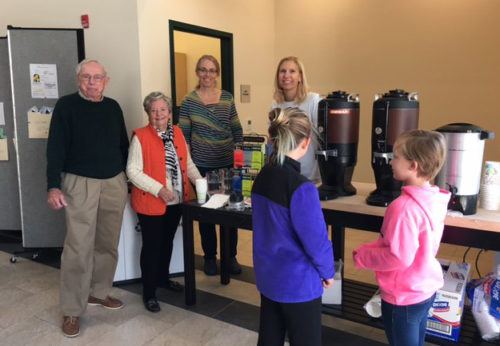 Members of St. Margaret’s Episcopal Church, Annapolis, Maryland, greeted voters Nov. 8 at the local polling station in their church with coffee and other beverages. Photo: St. Margaret’s Church via Twitter

Since 2012 the parish added the formation building and now voters can line up inside. “It’s a different dynamic but, the hospitality is still the same,” he said. More than 600 voters had come through by midday.

Being a polling place is a “really easy way for us to bring the community into our place and show them what we value, which is hospitality, which is warmth, which is love,” Mayer said.

There are some brochures of St. Margaret’s ministries visible around the area, too.

“If I can greet every person who’s voting, whether they have a Trump hat on or a Hillary button with the same kind of Christian love, I feel like that sends a really strong, powerful message to the community that we’re here for everyone and that we want to be a place of healing, of togetherness and of mission.”

Prayers for the country will continue Nov. 9 with a number of Episcopal congregations planning services. Chief among them, Washington National Cathedral will host special morning, noon and evening services, devoted to healing and reconciliation. Similar services will be held at parishes across the Diocese of Washington.

“The divisions that have developed between different parts of our community make it difficult to see how we walk down that path together,” the Very Rev. Randy Hollerith, cathedral dean, said in a press release. “These services should be seen as a beginning of the hard, but critical work, of bridging the gaps between us as citizens and neighbors.”