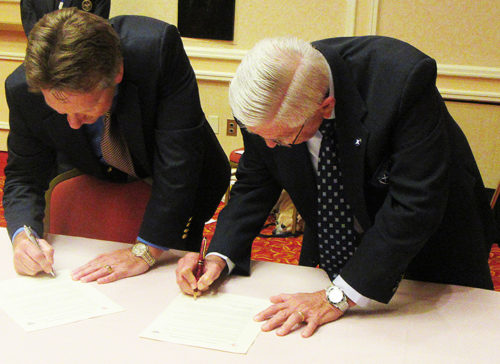 Steps to create more Scouting troops in Episcopal churches were begun Oct. 17 when the Brotherhood of St. Andrew and the Boy Scouts of America signed a joint document pledging more Episcopal support.

Acting upon the 78th General Convention mandate for the Brotherhood to “raise up the next generation of young men throughout the Episcopal Church,” Brotherhood of St. Andrew President Jeffrey Butcher and Boy Scouts of America Chief Executive Michael Surbaugh simultaneously signed a Memorandum of Understanding between the two longtime-linked organizations.

The Memorandum of Understanding pledges the Brotherhood to promote and increase its support further for Scouting units in Episcopal churches, offer annual training sessions in churches wishing to sponsor Scout troops, mentor young men undertaking the BSA’s God and Country program and to offer Brotherhood chapter involvement in every Scout troop.

There are currently 1,173 Scout troops in Episcopal churches involving 93,860 Scouts. The number of Scouting units chartered to Episcopal churches has grown despite a two percent loss in membership for the Boy Scouts of America overall.

“This document pledges the Brotherhood to take several steps to strengthen our support of Scouting,” Butcher said. “We now have a formal seat at the table, along with other denominations.” Other major faith groups that support Scouting include Baptist, Roman Catholic, Lutheran, Presbyterian, Latter Day Saints and Methodist churches. 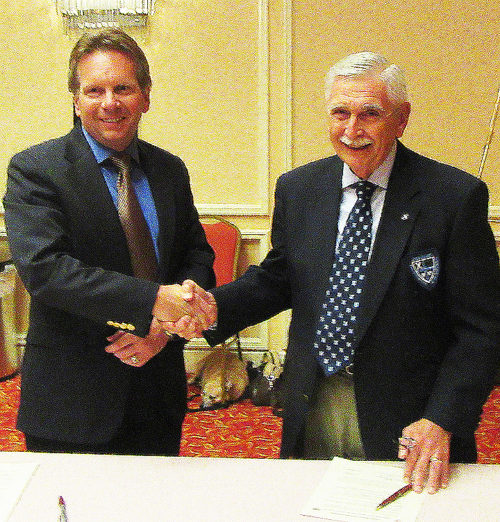 The Memorandum of Understanding was crafted by Brotherhood Vice President for Mentoring Ed Milbrada and BSA executive Gene Butler. Milbrada is a longtime Scout leader and advocate for the 106 year-old organization that serves 2,004,713 young men and women in five different Scouting programs in the U.S. (about 41 million worldwide).

The first new action item has been created – a edition of the New Testament With Psalms to be used at future Scouting jamborees and conclaves. The Brotherhood joined Baptist, Roman Catholic, Lutheran and Churches of Christ denominations to sponsor the publication.

Both organizations were incorporated by U.S. President Teddy Roosevelt – the Brotherhood of St. Andrew in 1908 and the Boy Scouts of America in 1910.

— Jim Goodson is editor of the St. Andrew’s Cross, the publication of the Brotherhood of St. Andrew. He can be reached at jimgoodson@aol.com.